Argyle manager Ryan Lowe hailed his players’ ability to bounce back after disappointment at Portsmouth to claim a heartening 1-0 win at Accrington Stanley in sub-zero temperatures.


Ryan Lowe’s Pilgrims head back up the road for another long-haul away trip to Accrington Stanley on Tuesday night.


For the second time in 10 days, Ryan Lowe's Pilgrims take on Accrington Stanley on Tuesday evening.


Next week's Sky Bet League One clash with Accrington Stanley at the Wham Stadium will now kick-off at 5.30pm.

It was far from the prettiest of games on a tricky pitch and truly Baltic weather, but a solitary effort from Niall Ennis early in the second period proved enough for the Greens, as he pounced on a defensive error to score.

Accrington understandably threw the kitchen sink in the closing stages but could find no way past a determined defensive display, alongside some inspired Michael Cooper goalkeeping.

Argyle boss Ryan Lowe made just one change from the side that performed so well in the 2-2 weekend draw at Portsmouth, handing a first start in the Green shirt to striker Ennis, with Ryan Hardie dropping to the bench.

Accrington manager John Coleman made three changes from the weekend draw with Northampton, bringing in Cameron Burgess, Matt Butcher and Paul Smyth for Tariq Uwakwe and the suspended duo of Joe Pritchard and Sean McConville.

It is just ten days since the two sides played out a highly entertaining 2-2 draw at Home Park but all the pre-match talk at the Wham Stadium surrounded the freezing conditions in the North-West.

Smyth was first to make his introductions to the game, turning smartly in the midfield before unleashing a dipping effort that bounced awkwardly in front of Cooper, who grasped the ball at the second attempt.

The small piles of shoveled snow dotted around the perimeter of the pitch proved a suitable backdrop on a bitter night but Will Aimson demonstrated his warm-up had gone well with a superb recovery challenge after Butcher had found space on the left.

A dipping free-kick from Adam Phillips thankfully did the dip part too late to trouble Cooper on 10 minutes but it was a generally scrap start to proceedings, with neither side able to find the attacking fluency that had been so prevalent in the reverse fixture.

A fine ball down the line from Kelland Watts did give Danny Mayor the chance to win a corner kick that eventually found a way to Panutche Camara on the edge of the area but he was unable to keep the snapshot down.

Stanley replied with a surge down the left channel and Dion Charles squeezed a low shot back across goal that had Cooper at full stretch in turning the ball away from danger, with Jerome Opoku completing the tidy-up job.

While the bumpy pitch made it difficult for the Greens to find their normal passing rhythm, there was a solid look to the Pilgrims and Mayor then discovered his mojo midway through the first period, jinking inside Ben Barclay for a dangerous cross cleared well by the hosts.

Luke Jephcott, fresh from another double at Portsmouth, spread a lovely pass wide to Byron Moore, who won a corner taken quickly by the Pilgrims and Ennis was in a glorious position at the back post but the young forward possibly rushed the effort, sending it over the bar with ‘keeper Nathan Baxter stranded.

Argyle were suddenly playing some lovely football, with Moore and Camara combining beautifully down the right flank and the corner-count was building steadily for the Pilgrims. Conor Grant took responsibility but Barclay headed clear.

Accrington came back with a swift counter and Butcher slipped a pass for Charles to run through on goal. Cooper quickly advanced from his line and read the intentions of the Stanley forward to make a super save down to his left.

A short free-kick on the half-hour ended with an even closer effort from the hosts, as Phillips expertly controlled his curling effort from 20 yards and Cooper could only look on with relief as the ball thundered clear off the crossbar.

The Pilgrims changed the dynamic again with a lovely weaving run from Ennis but the ball bobbled as he struck from 20 yards with his left foot, and the effort flashed well over. Both teams toiled hard for the remainder of a tight first half but the scores remained level, and there were no changes of personnel at the interval.

A brave challenge by Watts prevented Charles from a clean shot on goal from the first corner after the break and it proved crucial, as Argyle grabbed the lead from the very next attack.

Moore was the instigator, drilling a ball forward for Ennis and when Barclay’s attempted head back to Baxter fell way short of its target, Ennis nipped in to round the Accrington custodian and score the easiest of goals for Argyle.

The home side attempted to find a quick reply with a skidding shot across goal from captain Seamus Conneely that thankfully evaded everyone in a crowded area before fizzing beyond the far post.

The lively Smyth was next to have a pop, chasing on to a long ball over the top from Charles but the angle was tight for the Accrington winger, and Cooper again judged his position perfectly to make a solid save with his legs.

Stanley were throwing everything at Argyle in search of an equaliser and it was testament to the Pilgrims that they remained disciplined in their defensive work, limiting the hosts to a succession of crosses into the box.

When a loose ball did fall to Charles, Opoku reacted immediately with a fine tackle and Mayor launched a swift counter, scooping a pass toward Camara, who was denied by alert goalkeeping from Baxter.

It proved the final contribution for Camara, as he was replaced by the fresh legs of Adam Lewis and the substitute was soon involved, charging down a Baxter clearance that very nearly fell to Jephcott for a shot on goal.

Hardie for Jephcott was the next Pilgrim switch and he was quickly running the channels for an Argyle side that had set in for a final 15 minutes of protecting their lead, while always offering a threat on the break.

Tyrese Fornah was foraging his way through a mountain of work in the midfield to help shield his defensive colleagues, who were well marshalled by Opoku delivering a colossal display against his former club.

Ennis provided the rearguard with some respite when he set off on a surging run through the middle and fed a pass for Hardie to cut inside for a low shot that proved comfortable for Baxter.

On the very few occasions that Accrington looked like they may breach the Pilgrim defence, Cooper was alert to the danger, racing off his line to either collect the ball or punch clear the danger.

Possibly the biggest satisfaction for the Pilgrims was that an excellent Accrington side appeared to have run out of ideas as the game entered its final five minutes, with the triumvirate of Aimson, Opoku and Watts still standing strong at the back.

Stanley did win a free-kick on the edge of the area and Charles won the argument to have a shot, but he sliced the effort well wide. Opoku then intervened with another fabulous interception to deny Smyth a shot on goal.

Accrington conjured one more chance with a cross from the right met by the head of Phillips and Cooper pulled out a stunning save to once again frustrate the home side. Incredibly, the young custodian found an even better block moments later to deny Charles and seal three wonderful points on the road.


Argyle manager Ryan Lowe hailed his players’ ability to bounce back after disappointment at Portsmouth to claim a heartening 1-0 win at Accrington Stanley in sub-zero temperatures.


Ryan Lowe’s Pilgrims head back up the road for another long-haul away trip to Accrington Stanley on Tuesday night.


For the second time in 10 days, Ryan Lowe's Pilgrims take on Accrington Stanley on Tuesday evening.


Next week's Sky Bet League One clash with Accrington Stanley at the Wham Stadium will now kick-off at 5.30pm. 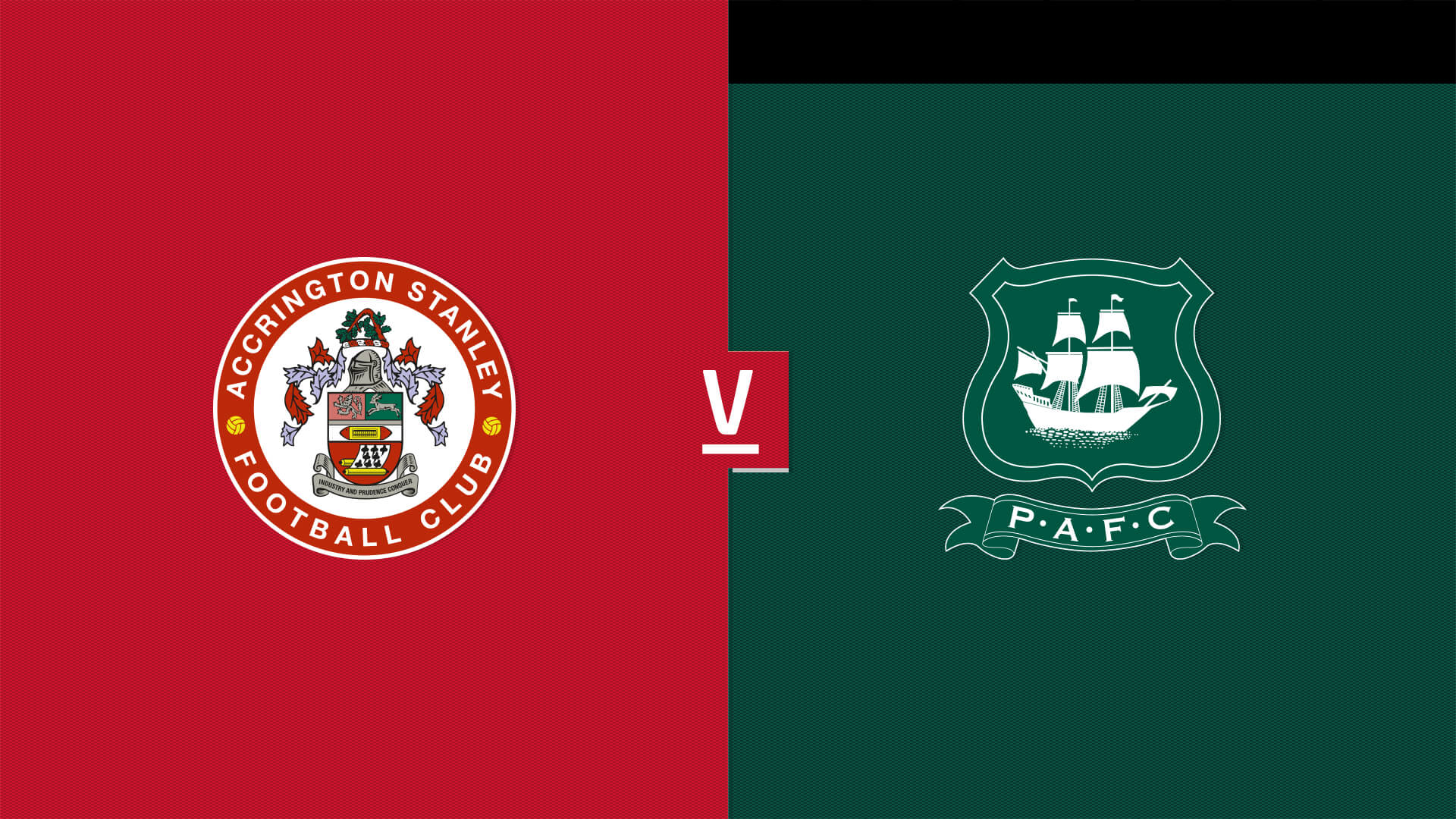 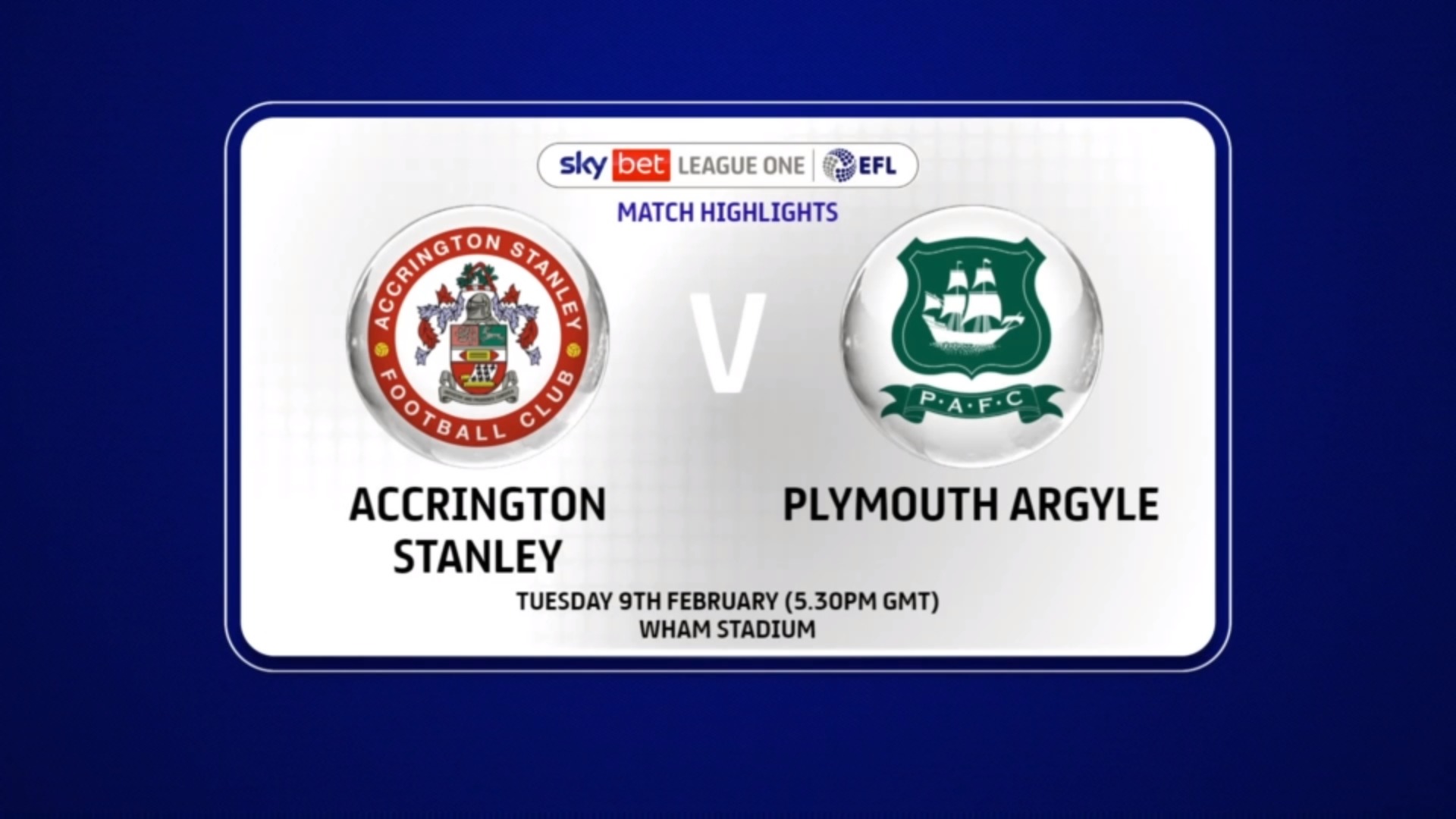 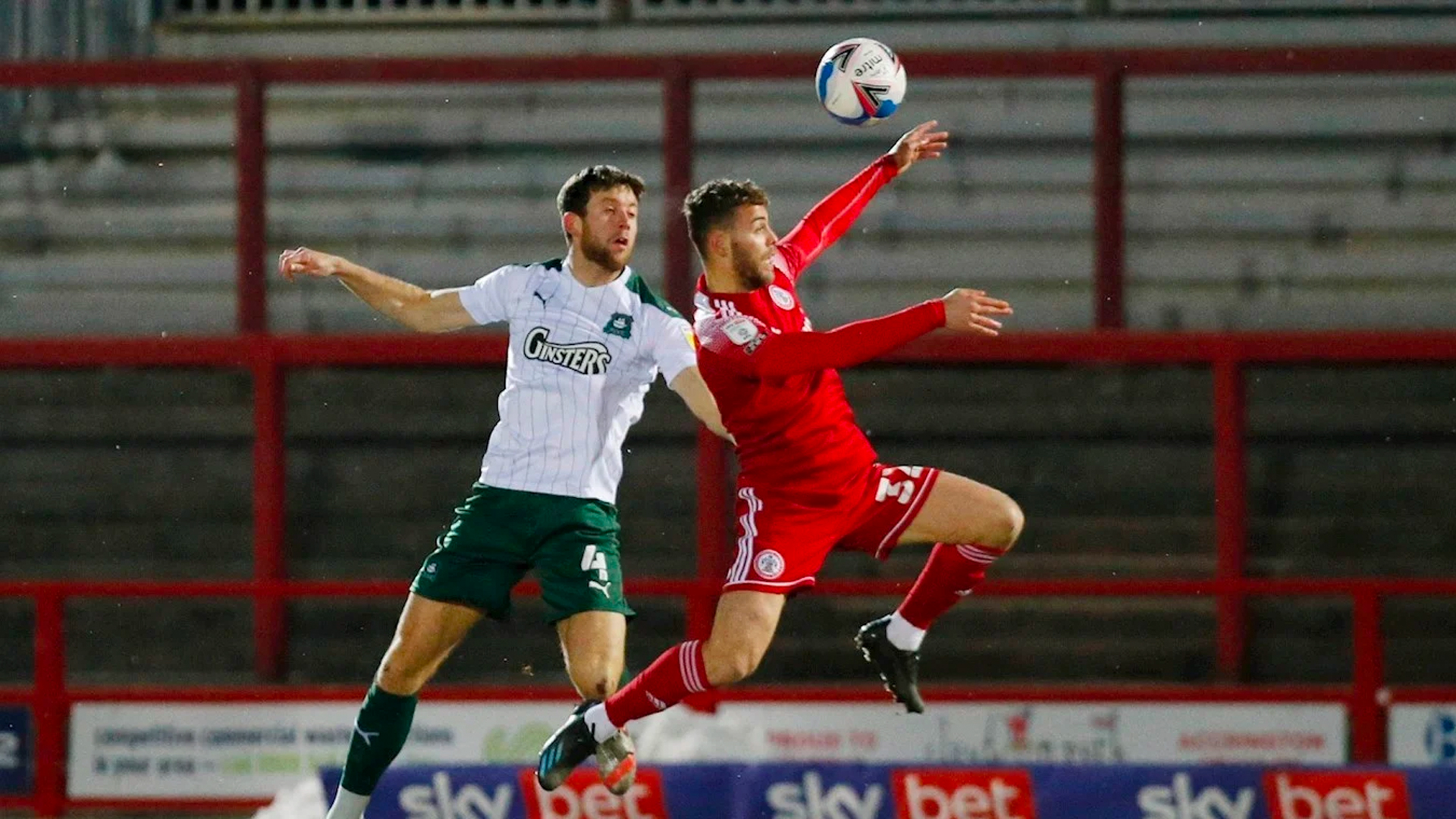