Argyle manager Ryan Lowe spoke of his pride in his team after the Greens secured a well-earned 1-0 win over Fleetwood Town at Home Park.

An early own goal ultimately proved enough for Argyle to secure a solid victory at home to Fleetwood Town on a chilly Home Park day.

Harrison Holgate was the unfortunate man for the visitors but the scruffiness of the goal could not detract from a terrific composed display by the Pilgrims.

Argyle have yet to taste defeat in 2021 and we have quietly moved to just three points outside the play-off positions.

Argyle manager Ryan Lowe stuck with the same side that battled brilliantly to a 1-0 win at a freezing Accrington in midweek, although there was a welcome return to the bench for Joe Edwards after a brief injury absence, with Ryan Law dropping out of the squad.

Fleetwood boss Simon Grayson also kept faith with the team that came from behind to defeat Doncaster Rovers on Tuesday night, ending a run of 10 games without a victory for the Cod Army.

Both sides eased themselves into the game, with Will Aimson tracking the run of Paddy Madden to repel an early cross from the visitors, quickly followed by some astute goalkeeping by Michael Cooper in palming over a dipping Charlie Mulgrew free-kick.

Argyle opened their attacking account with a sweeping move that started with Byron Moore in the right-back position and ended with Danny Mayor feeding Conor Grant on the left wing for a cross scrambled clear by the Fleetwood defence.

The Pilgrims were in front from the next forward foray, as Mayor this time spread a pass to Moore on the right and his cross was aimed toward the near-post run of Luke Jephcott. When the attempted assist missed Argyle’s leading scorer, Holgate was unable to react quickly enough before the ball bounced off him for an untidy own goal.

After 11 minutes of the reverse fixture at Highbury, Argyle were 2-0 down but this was already a very different performance from the Greens, compared to a day when nothing seemed to fall in favour of the Pilgrims.

The game then slipped into a quiet period of midfield sparring and some composed work from Argyle in stifling any Fleetwood response to the early setback, with Tyrese Fornah and Panutche Camara showing maturity beyond their years in the engine room.

A delicious ball down the line from Kelland Watts picked out the run of Grant and his instant cross nearly found the run of Niall Ennis, but when the ball was deflected into the path of Jephcott on the edge of the area, his drilled shot was well held by goalkeeper Alex Cairns.

There was a growing fluency in Argyle’s play, as Watts and Mayor patiently worked space for Grant to deliver a cross to the feet of Jephcott, who swivelled sharply for an effort charged down by Callum Connolly in the centre of Fleetwood’s defensive trio.

Jephcott managed to evade the defenders with his next attempt, fizzing a well-struck left-foot drive toward the bottom corner and it required an excellent save from Cairns to keep his side in the contest.

There was a sharpness in Argyle’s leading marksman on a gusty day at Home Park and, once again this season, the Greens were causing a visiting team a number of problems through the combination of Mayor and Grant down the left.

Fleetwood tried to find some menace of their own with a curling effort by Dan Batty whipped narrowly over from distance but play was soon back up the other end, with Ennis cleverly cutting the ball back from the right byline and only just out of reach for Camara to unleash a shot.

The Cod Army replied with some neat work in the left channel and Paddy Madden tried to slip a pass for Batty, but Camara intervened with a superbly-timed tackle to quell the danger.  Argyle ended the half back in the ascendancy and a thoroughly satisfactory opening 45 minutes for the Greens.

After a quiet start to the second period, Fleetwood won a brace of free-kicks fizzed over by Mulgrew, repelled by good defending from Camara and Watts.

Argyle found their rhythm with good work from Grant and Mayor winning a succession of corners, the second of which found the head of Jerome Opoku, who had been imperious in his defensive work, but was unable to trouble Cairns in the attacking sphere.

Fleetwood made the first change on the hour, removing Jordan Rossiter for Sam Finley, and the visitors tried to crank up some pressure via a Mulgrew corner but Cooper did a super job in punching the ball clear.

The Greens came back with yet another searching run from Mayor, releasing the ball to Grant for a cut-back toward Camara, who was unable to open his foot enough to steer the shot on target from 15 yards.

Cooper then produced a crucial block to deny Fleetwood’s best chance, as Callum Camps found room through the middle and the Pilgrim custodian was quickly, bravely, off his line to smother the ball.

Ryan Hardie replaced Jephcott for the final 20 minutes and Adam Lewis came on for the limping Panutche Camara, with Grant shifting inside to a midfield role.

While the second half lacked the attacking fluency of the first, Argyle entered the closing ten minutes in a position of relative comfort, with Fleetwood unable to create anything overly menacing in their search for an equaliser.

A cross from Finley did find Kyle Vassell for a half-chance at the near post but he failed to hit the target, and the visitors looked to change things with a double substitution, introducing Harvey Saunders and Ryan Rydel for Danny Andrew and Holgate.

Moore ended his afternoon with a surging run and cross that found Lewis, but he was unable to find the right connection to trouble Cairns, and Edwards was then brought on for some fresh legs in the closing stages.

Argyle were doing a terrific job in looking to kill the game and searing pace from Lewis created a chance for Hardie, who aimed his shot toward the far corner and it only just bobbled wide of the intended target.

Barrie McKay for Camps was the final roll of the dice for Fleetwood but it remained Argyle the side pushing forward in search of another goal, rather than the visitors pressing for a leveller.

The Greens saw out the closing minutes with refreshing comfort and yet another mature display from a young side earning three more deserved points in Sky Bet League One.


Argyle manager Ryan Lowe spoke of his pride in his team after the Greens secured a well-earned 1-0 win over Fleetwood Town at Home Park. 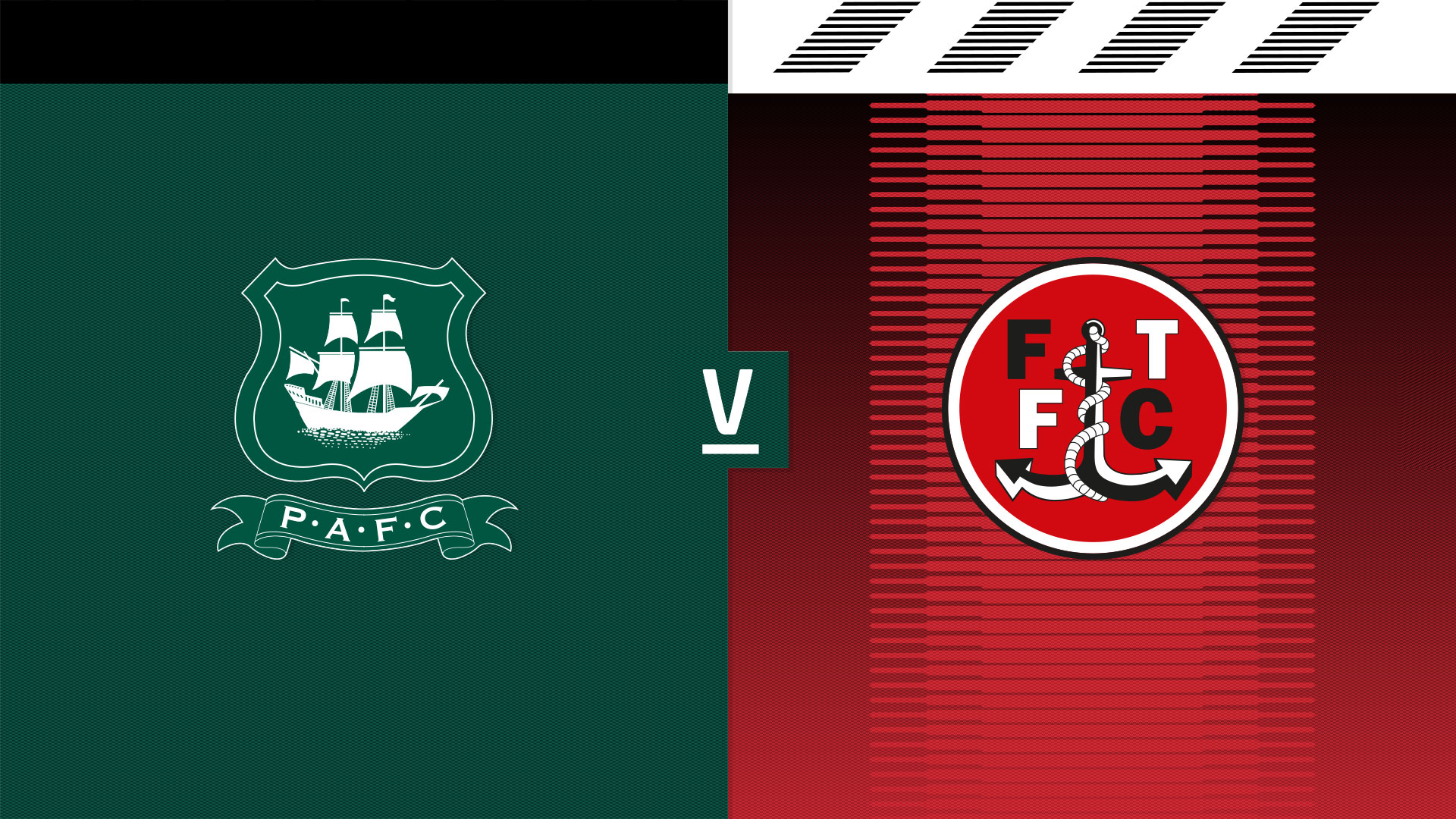 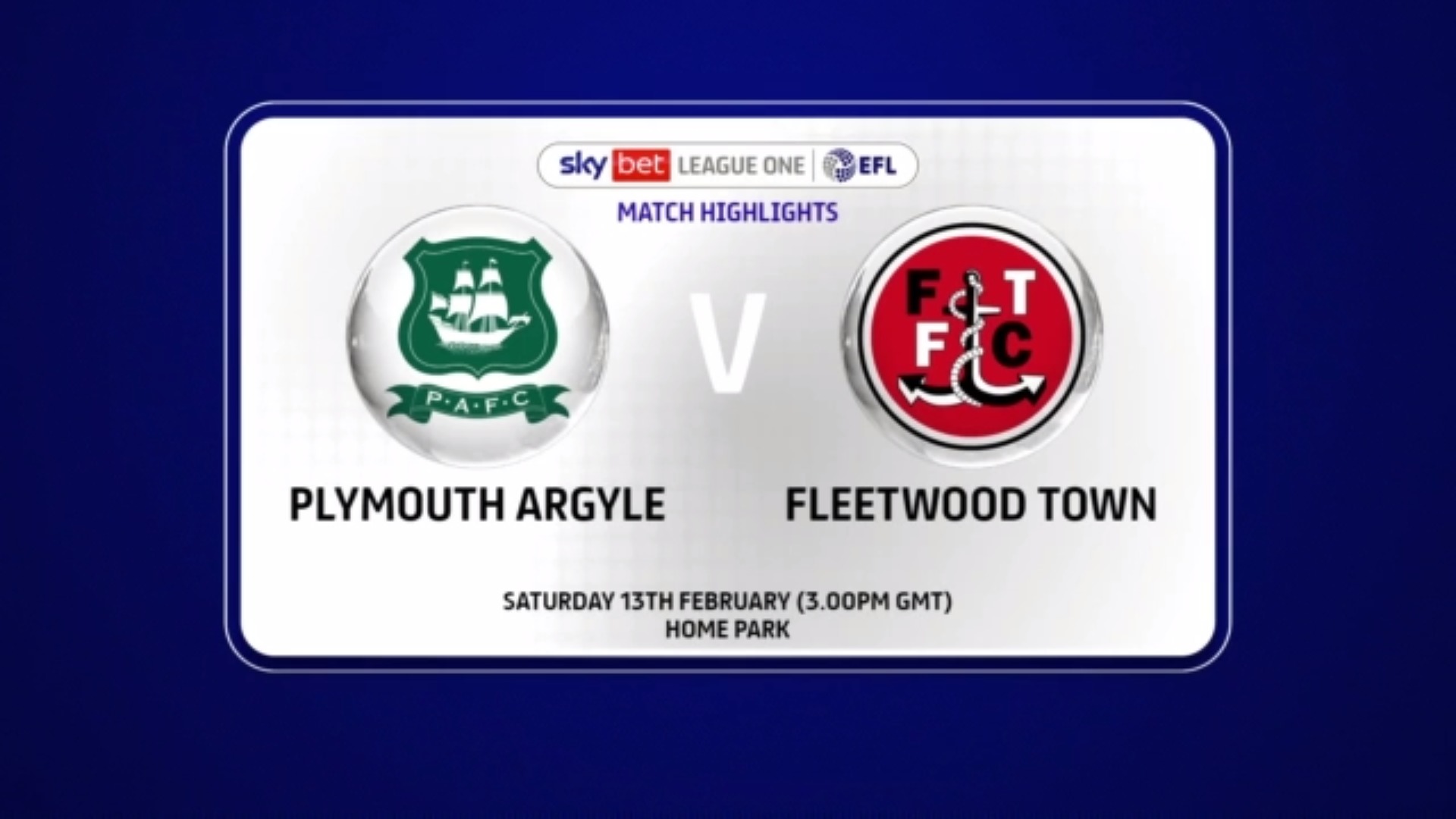 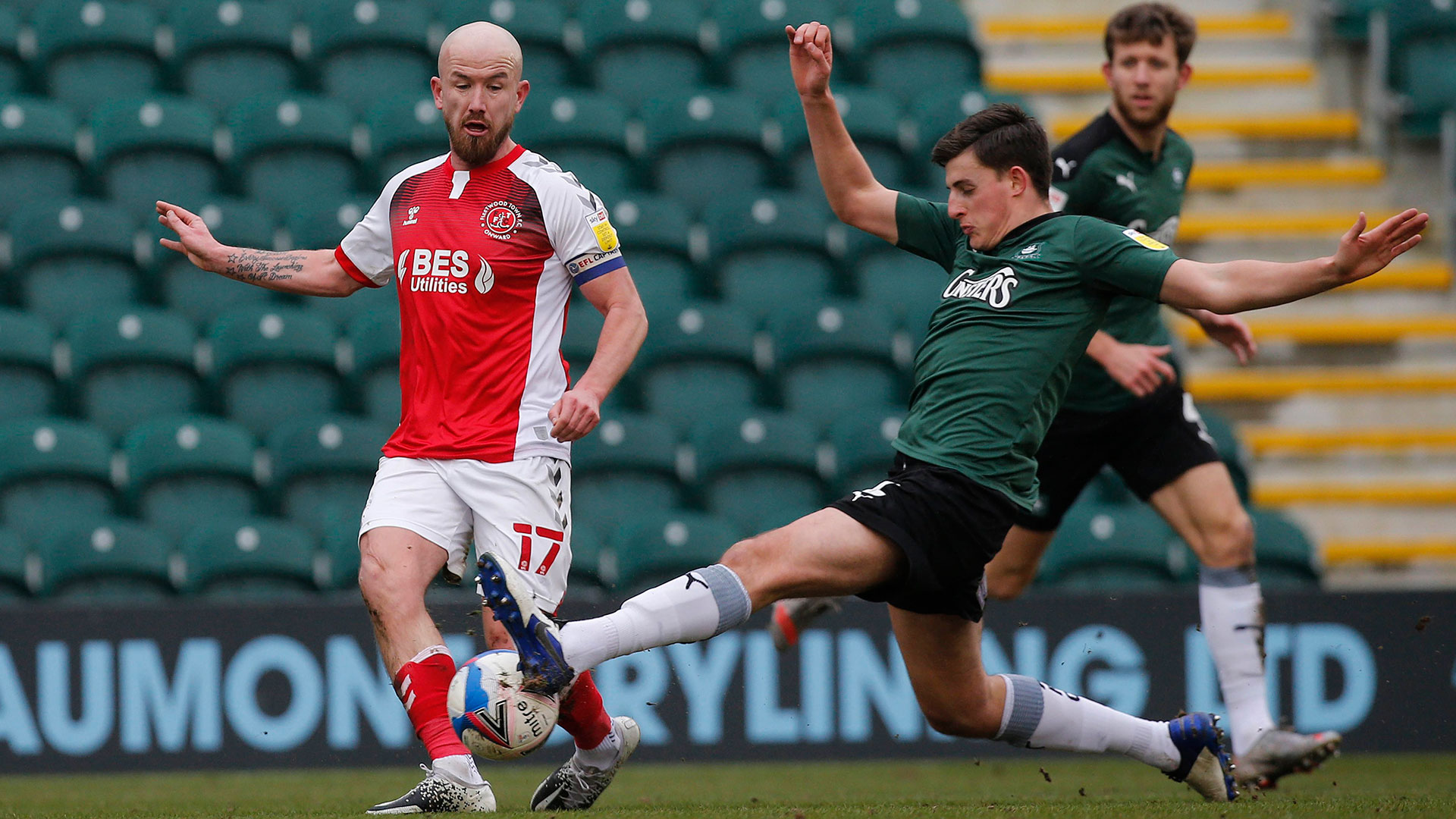