Argyle manager Ryan Lowe was delighted that his side evidenced a “ruthless” edge during their 2-1 Sky Bet League One victory over Doncaster Rovers on Tuesday night.

THE TEAMS: Argyle vs Doncaster Rovers


The teams are in ahead of the Pilgrims' Sky Bet League One clash with Doncaster Rovers at Home Park.


After two fixtures on the road, Ryan Lowe’s Pilgrims return to Home Park on Tuesday night, facing Doncaster Rovers under the lights at the Theatre of Greens.

Argyle returned to Home Park for another powerful display on familiar turf and a richly deserved three points over a dangerous Doncaster Rovers side.

The Pilgrims broke the deadlock on 34 minutes, when Luke Jephcott converted a sublime assist from Danny Mayor and victory was virtually sealed by a second from captain Joe Edwards midway through the second period.

Fejiri Okenabirhie did pull one back for a slightly uncomfortable final 15 minutes but Argyle stayed calm and composed in securing the victory.

Argyle manager Ryan Lowe made just one change from the weekend draw at Wigan Athletic, restoring Panutche Camara to the midfield at the expense of Ben Reeves. There was also a welcome return to the bench for Conor Grant after his period of self-isolation, with Klaidi Lolos making way.

Doncaster boss Darren Moore made two changes from the surprise 2-1 loss at home to Crewe on Saturday, withdrawing Josh Sims and Spaniard Madger Gomes for Cameron John and the vast experience of James Coppinger.

After a tentative start from both sides, Argyle found some rhythm with a neat exchange down the left between Mayor and Byron Moore, but the cross was well defended by Rovers in the strange atmosphere of an empty Home Park.

Doncaster, who had enjoyed impressive wins over Portsmouth and Ipswich prior to the Crewe reverse, were patient in their probing through the opening 10 minutes but found no gaps in a well-organised Pilgrim backline.

Mayor, meanwhile, was beginning to find his customary pockets between the lines and always on the lookout for a killer pass to the youthful forward partnership of Jephcott and Ryan Hardie.

When the number 10 did find Hardie, it was in a wide position for a deep cross that was then returned into the box from the opposite flank by Moore, forcing goalkeeper Josef Bursik into a punch clear at full stretch.

There was a sudden injection of increased tempo from the Pilgrims, carving open the visitors down the left again and a low cross from Mayor found Jephcott at the near post, but credit to Bursik for a fine save with his legs.

Doncaster were struggling to conjure a similar opening at the other end and when they did get a faint sniff of goal, Jerome Opoku timed his tackle perfectly to thwart Coppinger. Argyle countered immediately and Bursik was swiftly off his line to dive low at the fee of Hardie.

A magical drop of the shoulder from Mayor was the catalyst for Argyle’s opener, as he sauntered infield from the left and cut back a perfect pass for Jephcott to steer an assured finish inside the near post.

It was a thoroughly deserved opener for the Pilgrims, who had gradually taken control of the midfield tussle and typical of both Mayor and Jephcott, as the creator picked out the right pass for a young striker blessed with an instinctive ability to find space in the danger zone.

Argyle were playing with increased confidence and more delightful work from Mayor after a short corner culminated in a drilled low cross that was hacked clear by a Donny defence feeling the pressure.

Rovers simply could not contain the influence of Mayor, this time popping up on the right for a driven cross well held by Bursik, who was enduring a significantly busier evening than his opposite number, Mike Cooper.

The Pilgrims entered the half-time break fully content with their control of the game, although it did require a block from Kelland Watts to deflect over a half-volley from Jon Taylor after the restart, and the subsequent corner was headed wide.

The Argyle riposte was to quell any mild concern with a sustained period of possession that only came to an end when Hardie spun on the edge of the area for a low drive that proved comfortable for the visiting custodian.

Mayor dipped back into his bag of tricks with more wizardry on the wing and a cross booted away from the Donny defence, which somehow found Okenabirhie and he managed to hold off the challenge of Moore before launching a decent chance over the bar with Cooper advancing from his line.

The Greens came back again with a super move down the right, as Will Aimson exchanged passes with Hardie and continued his run into the box for a low effort charged down after a neat lay-off from Jephcott.

Darren Moore decided the hour-mark was the right time for his first change, removing Matt Smith for Sims, as Doncaster sought to commit more men forward in search of an equaliser.

Argyle crushed that ambition with a brilliant second goal, as Watts floated a ball down the line for Moore to chase and he darted inside, cutting the ball across goal for Edwards to calmly slot home at the far post.

It was superbly worked from the Greens and the final outcome of one wing-back assisting the other summed up the positive approach under Lowe, who immediately reacted to the pleasing situation by introducing the fresh legs of Frank Nouble for Jephcott.

Rovers tried to change the pattern with a drive from Ben Whiteman that was held by the safe hands of Cooper. Moments later, Okenabirhie was given room in the box to turn and slot home a goal that halved the Doncaster deficit.

Darren Moore turned back to his replacements for the final ten minutes, bringing on Danny Amos and Ed Williams for Brad Halliday and Coppinger.  Doncaster were happy to launch long balls into the penalty area and one fell to Okenabirhie for a shot on the swivel that was easily gobbled up by Cooper.

Timmy Abraham replaced Hardie for the closing minutes and he charged around with boundless enthusiasm in an attempt to deny Doncaster time to launch attacks with any degree of comfort.

A deflected free-kick from Amos in stoppage time won the visitors a late corner but Nouble was strong in his defensive work, as Argyle cleared the danger to seal three more fine points in a great start to the season.


Argyle manager Ryan Lowe was delighted that his side evidenced a “ruthless” edge during their 2-1 Sky Bet League One victory over Doncaster Rovers on Tuesday night.

THE TEAMS: Argyle vs Doncaster Rovers


The teams are in ahead of the Pilgrims' Sky Bet League One clash with Doncaster Rovers at Home Park.


After two fixtures on the road, Ryan Lowe’s Pilgrims return to Home Park on Tuesday night, facing Doncaster Rovers under the lights at the Theatre of Greens. 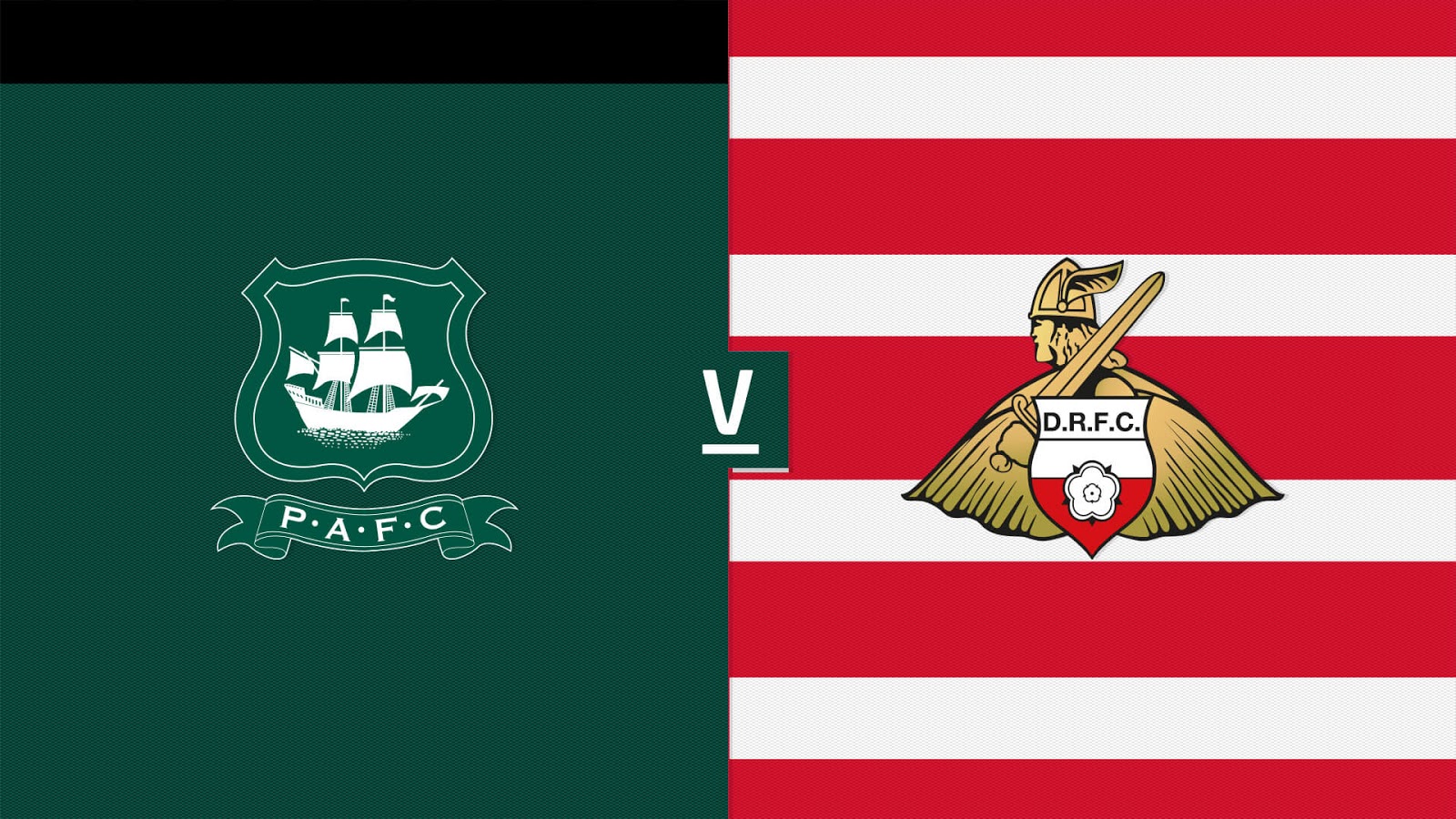 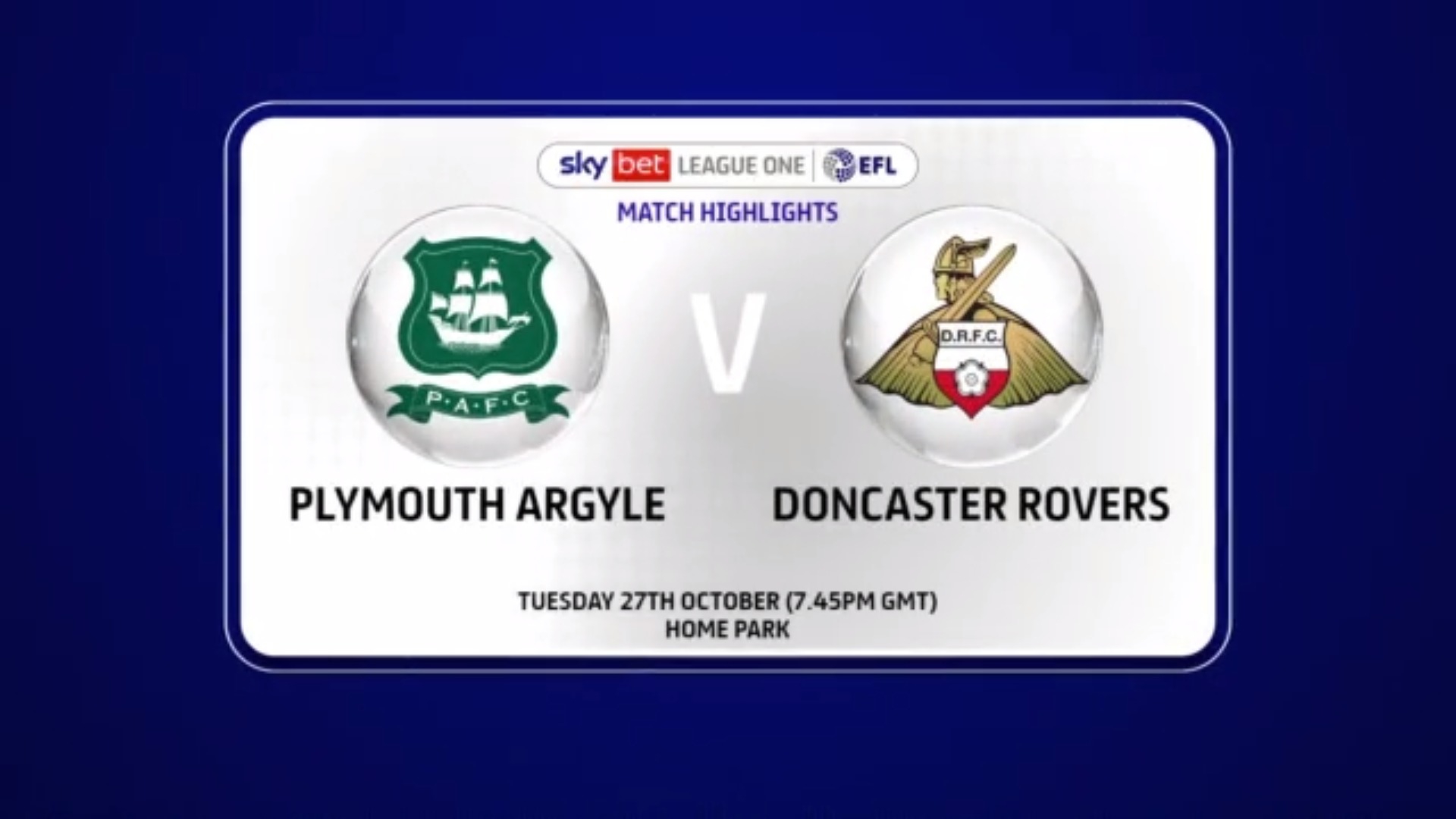 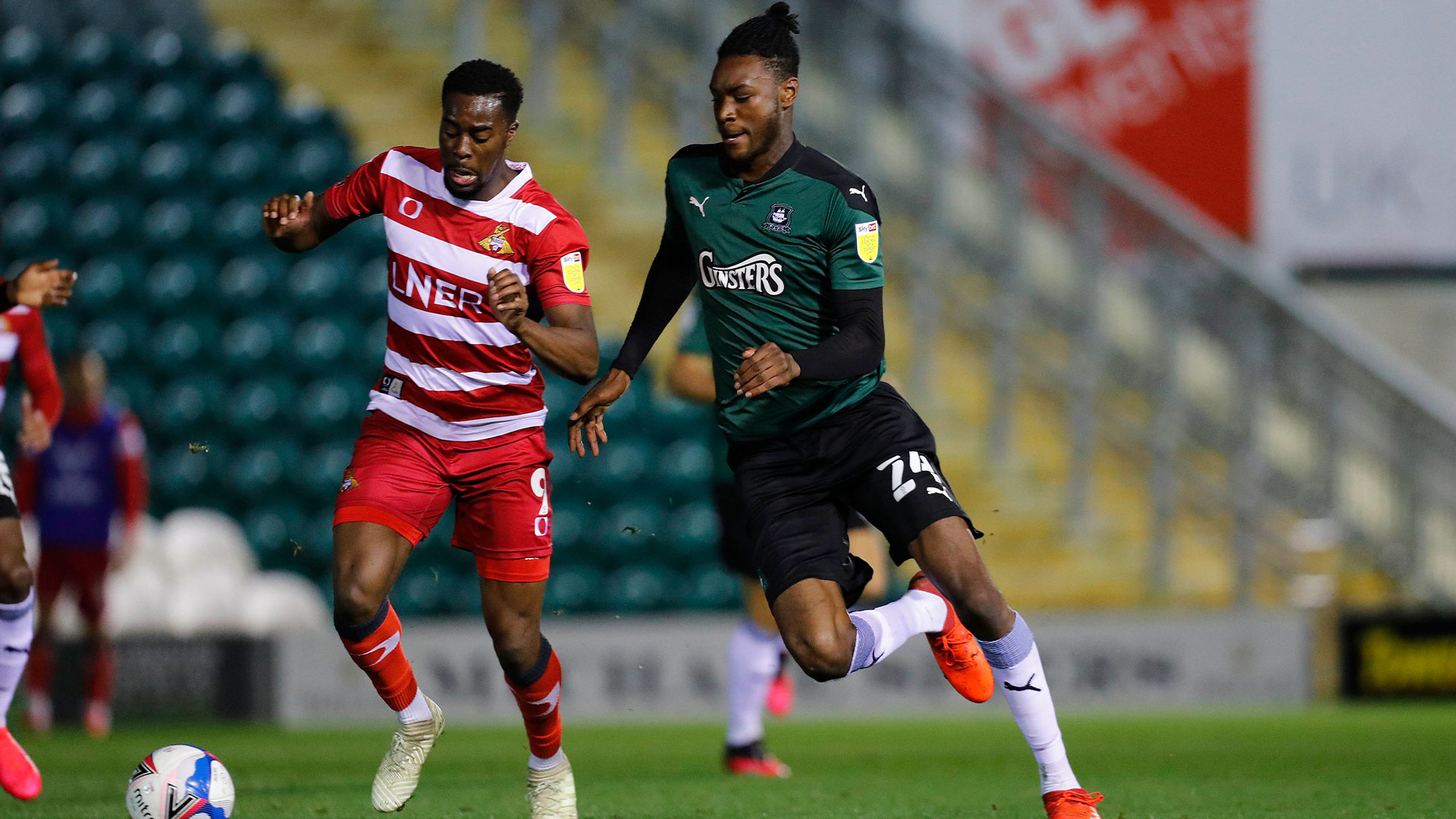