THE TEAMS: Wigan Athletic vs Argyle


The teams are in ahead of the Pilgrims' Sky Bet League One fixture against Wigan Athletic at the DW Stadium this afternoon.


The Pilgrims are back in action on Saturday afternoon, travelling to the DW Stadium to take on John Sheridan’s Wigan Athletic.

Argyle were denied all three points at Wigan Athletic, despite controlling the game for long periods.

Ryan Hardie gave the Greens a deserved first-half lead with a sublime finish but Wigan recovered well after the break to earn a draw through Will Keane.

The Pilgrims were relentless in their pursuit of a winner and unleashed an onslaught on the hosts, but Wigan threw bodies in front of every shot to deny the Greens.

Argyle manager Ryan Lowe made four changes to the side that slipped to defeat at Lincoln in midweek, opting for a fresh strike-force in the form of Hardie and Luke Jephcott, with Frank Nouble and Timmy Abraham dropping to the bench.

Ben Reeves was preferred to Panutche Camara in the engine room and Joe Edwards returned in the right wing-back role, pushing Byron Moore over to the opposite flank as replacement for the absent George Cooper.

Wigan boss John Sheridan, who spent two-and-a-half years at the Pilgrim helm, made just one switch from the narrow loss to Peterborough on Tuesday night, with Tom Pearce returning from injury to replace Keane.

There was a slight tweak in positioning for an Argyle defence still missing the experienced trio of Gary Sawyer, Niall Canavan and Scott Wootton, with Jerome Opoku occupying the central role and Kelland Watts on the left of the three, which was a reversal from midweek.

Argyle applied early pressure on a Wigan side looking to recover from three consecutive defeats, with a quick free-kick releasing Reeves for an inswinging cross that had the home defence creaking before they were rescued by an offside flag.

If Keane was hoping to recharge his batteries from the Peterborough game, the rest lasted just five minutes, as an injury to Viv Soloman-Otabor prompted a very swift return to action for the former Manchester United junior.

Excellent chasing down from Hardie had the Wigan defence back in panic mode on 12 minutes and the man on loan was denied an early test for goalkeeper Jamie Jones by a desperate recovery tackle from Curtis Tilt.

Danny Mayor opened his bag of tricks with a lovely run into the left channel but the cross was gobbled up by Jones, and he quickly countered with a long throw flicked on to Kai Nasimith, who crossed for Joe Garner to head tamely into the arms of Mike Cooper.

A fairly scrappy opening to the game was given a semblance of control by the neat passing of Reeves in midfield but it was generally a first quarter missing a clear-cut opportunity for either team.

A magical flick around the corner from Jephcott eventually prised open the Wigan defence for Hardie to make a dart into the area and it was credit to Tilt for scrambling back to block the shot. The subsequent corner was worked out to Tyrese Fornah for a thunderbolt from 25 yards that Jones could only palm clear.

The Pilgrims were dominating possession and territory, patiently building play through midfield to conjure their next chance, which came from a Watts cross headed over by Jephcott at the near post. Mayor then curled a low effort narrowly beyond the far post from 20 yards.

Argyle were knocking on the door and it deservedly opened on 34 minutes, thanks to a sloppy pass back across goal from Pearce and Hardie reacted superbly to calmly slot his first goal of the season beyond a stranded Jones.

It was the sort of assured finish that made Hardie such a hit in his first loan spell with the Greens last season and there was a delightful fluency in Argyle ranks, as Reeves and Mayor sliced through the Wigan midfield once again to spread a pass wide to Moore for an instant hit with his right-foot, but the curling attempt lacked sufficient dip to trouble Jones.

Wigan ended a gloomy first period for the hosts with a terrific deep cross from Lee Evans but Watts was in the right place to head clear the threat. Another decent delivery bounced to Garner for an ambitious overhead kick that scuttled comfortably wide to complete a very satisfactory first 45 minutes for Argyle.

Argyle, meanwhile, continued where they had left off, probing the home defence with a clever exchange between Jephcott and Mayor winning a corner, but Wigan coped well with the set-piece.

The home side did have the ball in the net when a deep cross from Naismith was headed back across goal for a slide-rule finish from Evans into the bottom corner but Argyle were spared by the assistant’s flag, although the decision was only reached after lengthy discussions between the officials.

Wigan were feeling mighty sore about the outcome and did have another pop at goal through Evans from a long-range free-kick, but Cooper snaffled the effort. Lowe reacted by introducing Nouble for Jephcott on the hour.

Tom James fizzed a 25-yarder over the bar for Wigan from the next attack but the game had generally descended into a disjointed affair in wet conditions at the DW Stadium.

Argyle had lost their rhythm and punishment arrived in the shape of an equalising goal, with Naismith dinking over a cross from the right and Keane ghosted in front of Cooper to glance a header into the waiting net.

The Pilgrims immediately sought to change the pattern by withdrawing Hardie for the fresh legs of Dom Telford and Argyle got going again as an attacking force with a surging run from Edwards, who fed the ball to Nouble for a shot charged down by the Wigan defence.

Fornah then dragged a speculative effort narrowly wide, just before welcoming a new midfield comrade, with Camara replacing Reeves. The new man had an instant impact, driving forward for a pass to Mayor, who cut inside but the shot was blocked, and Camara steered the rebound over.

A sublime exchange between Nouble and Camara then provided room for Moore to race into the area and his cut-back from the byline somehow just evaded the onrushing Telford. Argyle were laying siege on the Wigan goal, as Camara and Telford both had efforts charged down.

A long delay for treatment to Tilt halted the Green momentum and Wigan took advantage by winning successive free-kicks in dangerous areas, both thankfully wasted by the Latics.

Eight minutes of injury time gave Argyle the chance to keep up their search for a winner and superb strength from Nouble very nearly delivered, as he muscled his way into the box for a shot thwarted by a last-ditch tackle from Long.

Mayor and Moore then created another opening for Nouble, who saw his goalbound effort saved by Jones and the rebound ricocheted off a home defender for another corner. Will Aimson was next to have a shot deflected wide.

Argyle continued battering on the Wigan door until the final second but the winning goal refused to arrive.

THE TEAMS: Wigan Athletic vs Argyle


The teams are in ahead of the Pilgrims' Sky Bet League One fixture against Wigan Athletic at the DW Stadium this afternoon.


The Pilgrims are back in action on Saturday afternoon, travelling to the DW Stadium to take on John Sheridan’s Wigan Athletic. 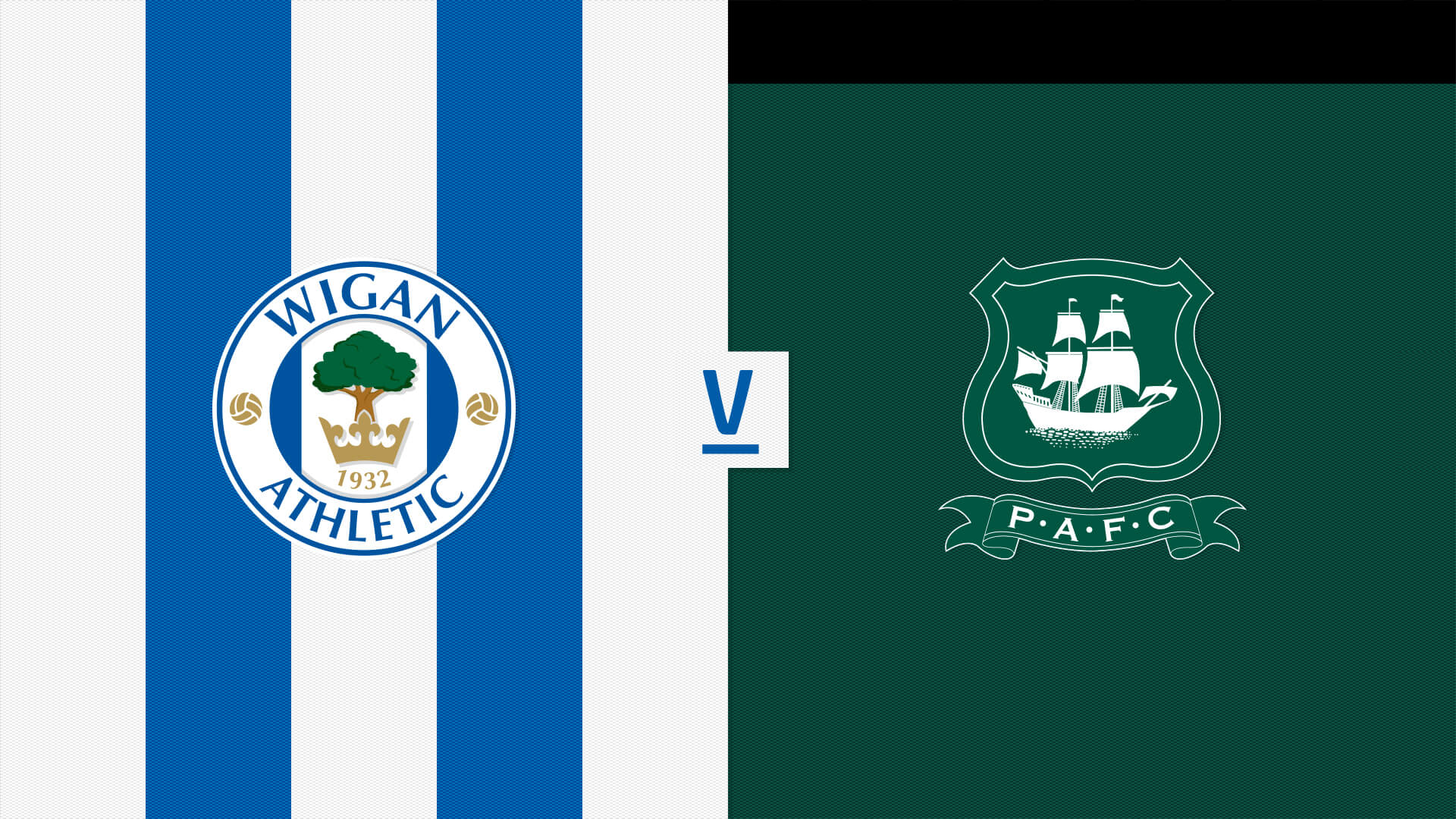 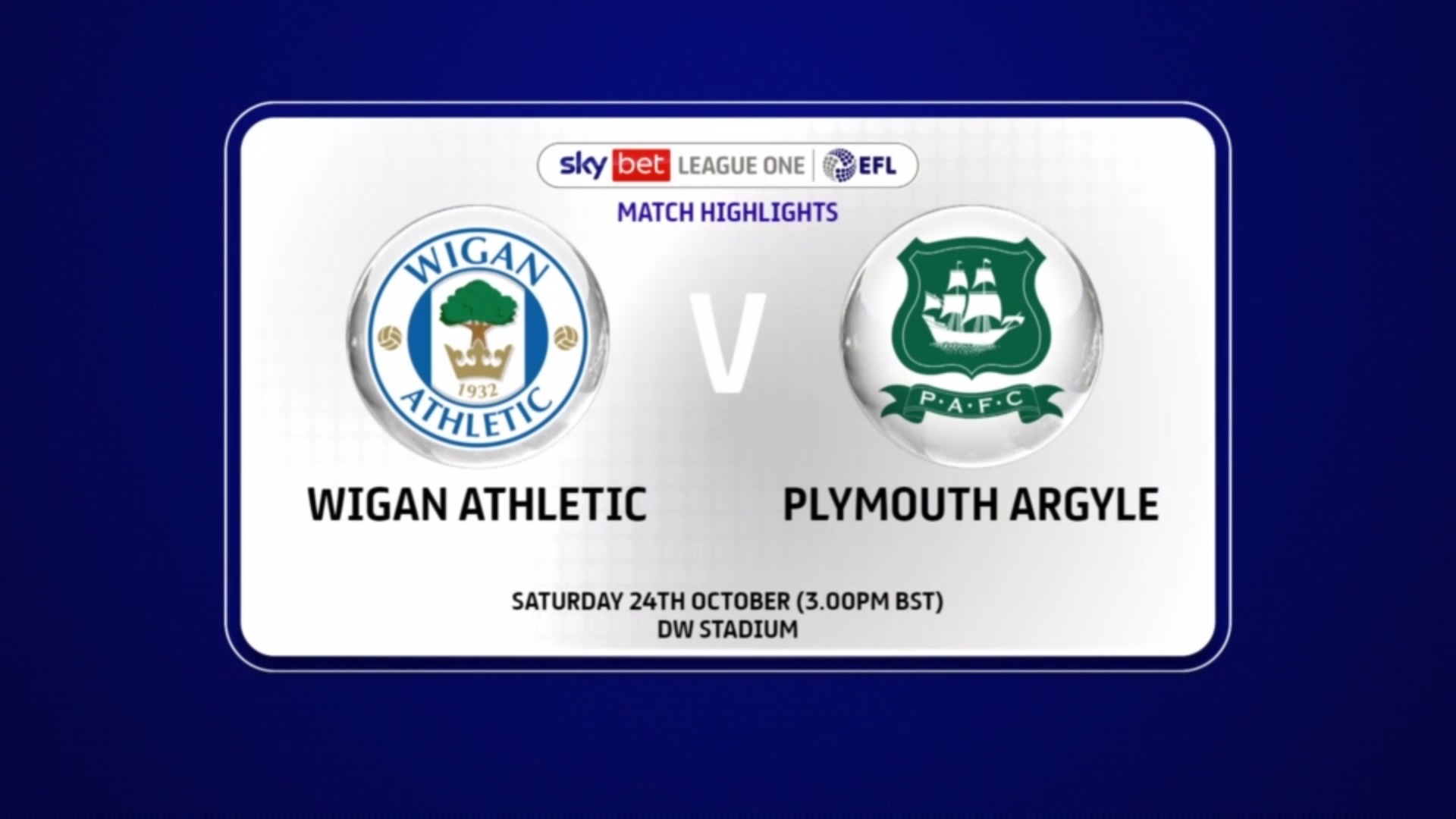 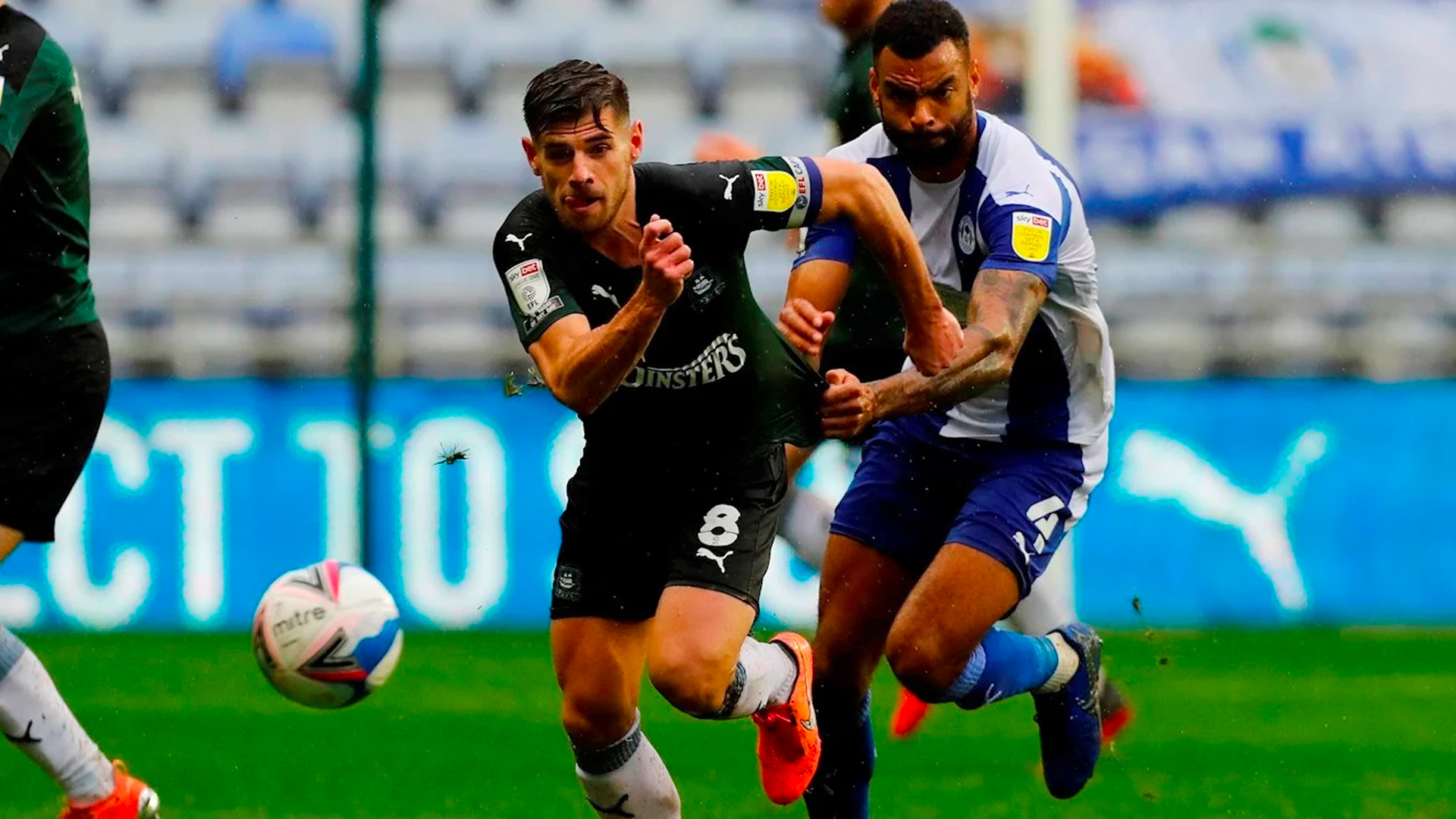