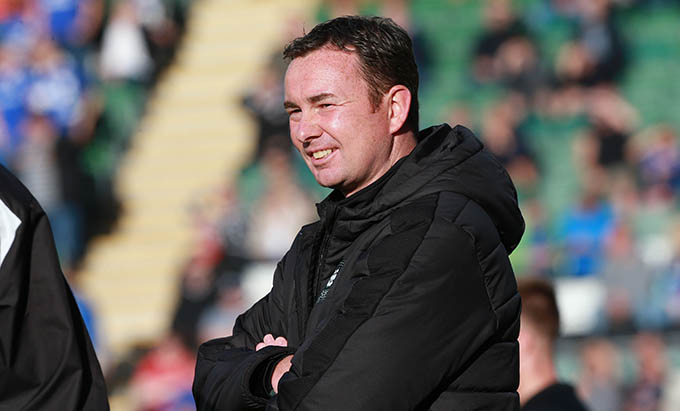 A single goal from Kenneth Zohore in the second half gave the visitors a 1-0 win against the Greens, who gave their Sky Bet Championship counterparts a thorough test in front of over 5,000 fans.

Whilst the pace of the game in the evening sun slowed somewhat at times, Derek’s side still stood up well to their stiffest test of the summer. With 20 players getting game time, including some who had the chance to introduce themselves to the Argyle fans, another key pre-season target can be checked off by the boss.

“It was a good workout,” said Derek. “I was obviously able to use 20 players tonight. It was good to get the new players coming in onto Home Park.

“I think it’s very important; some players haven’t played here before. They don’t know what the surroundings are like. With two weeks to go, I think that’s probably beneficial to us, rather than starting the following week.

“It was just about getting match fitness again. They gave us a test, without causing us too much trouble. Over the 90, it was a slow-paced game. It was probably played in quite a testimonial fashion at times, and probably not the way that both managers wanted the game to be played, but that’s the way it panned out.

“The usefulness is we go match minutes for players. We got the new players into playing at Home Park, against Championship opposition, and I think that was important.

“[It was a] very good gate. It’s important for the supporters coming here to see a team that are doing well in the Championship. They’ve added to the squad over the summer, and they’ve got an ex-manager coming back as well.”

Adams also gave an update on the injury status of three players who missed the game, beginning with Ryan Taylor, who is set to rejoin the side for the trip to Holland over the weekend.

“Jamie Ness is progressing well. He’s starting to build up his progression. He won’t travel with us to Holland; he’ll stay back here and train with us when we get back. He’ll be with the physio department back here.

“Gary [Miller] had a knock on the ankle, so we didn’t risk him. He’ll be fine for Sunday’s trip.”