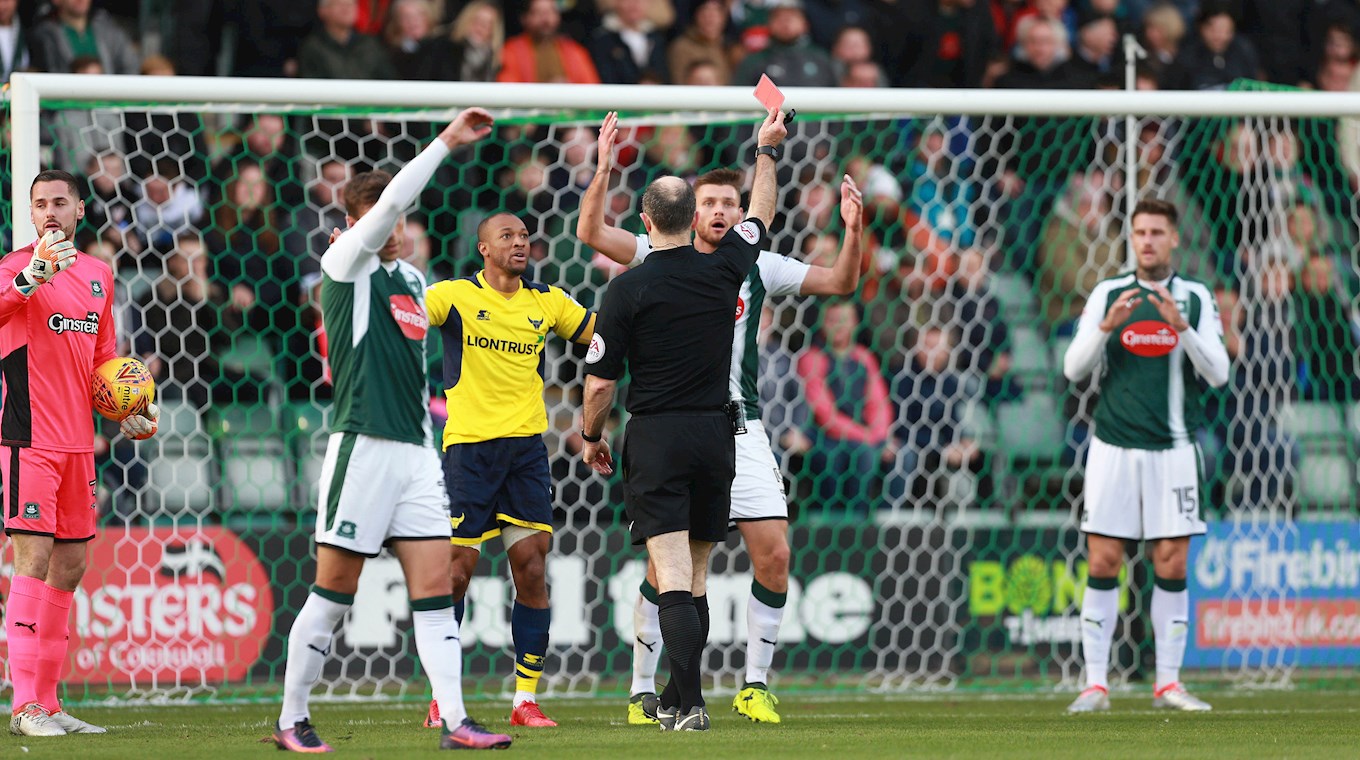 ARGYLE captain Gary Sawyer was as surprised as most of the 10,000-plus who watched the Pilgrims’ Armed Services Day defeat by Oxford United to see team-mate Ryan Edwards sent off.

Central defender Ryan was shown his second red card of the season after tangling with United forward Wes Thomas in the 14th minute, conceding a penalty from which Ryan Ledson opened the scoring in what turned out to be a 4-0 loss.

Under new directions, referee Graham Horwood would have had to be sure that Eddy either deliberately fouled Thomas, who went down easily in the challenge, or that the Argyle man acted violently, neither of which was obvious.

Gary said: “It looked a bit soft, to be honest. It looked like they got a little bit tangled up. Some ref’s give them and some refs don’t – unfortunately it went against us today.

“I spoke to [Horwood] after he’d pulled out the red card and just told me he felt it was a sending-off and he stopped a goal.

“I was expecting him to pull a yellow card out. I didn’t think he would send him off. Obviously, in years gone, you do get sent off for that – if he is going to give the penalty, he had to send him off – but because of how the rule is written now, I would have liked to have seen a yellow card for that.

“Obviously the referee didn’t deem that so he gave a red card.”

It was the sixth time in the last 15 Sky Bet League One matches that Argyle had been reduced to ten men this season – and fifth at home – and Gary said: ““It has happened too many times to us this season. Eighty minutes with ten men is a hard shift in any football and especially at this level we play at now. It’s a frustrating one.

“We have just come off the back of one of our best results, away to Bradford. I think that is why it is more frustrating – to then come home, not have the travelling, and play on a better pitch, and do that to ourselves, shoot ourselves in the foot.”

Despite the disadvantage of playing a man down for all but the opening 15 minutes, Gary felt that Argyle did not do themselves justice.

“You can’t use that as an excuse – we’re more professional than that,” he said. “Four goals is not good enough, with ten men or eleven men.

“Obviously it’s more difficult when you go down to ten men. We got to half-time 1-0 down, we did well to do that, I think. Then it just didn’t work for us in the second half. We let in sloppy goals, and that’s not like us, of late.”