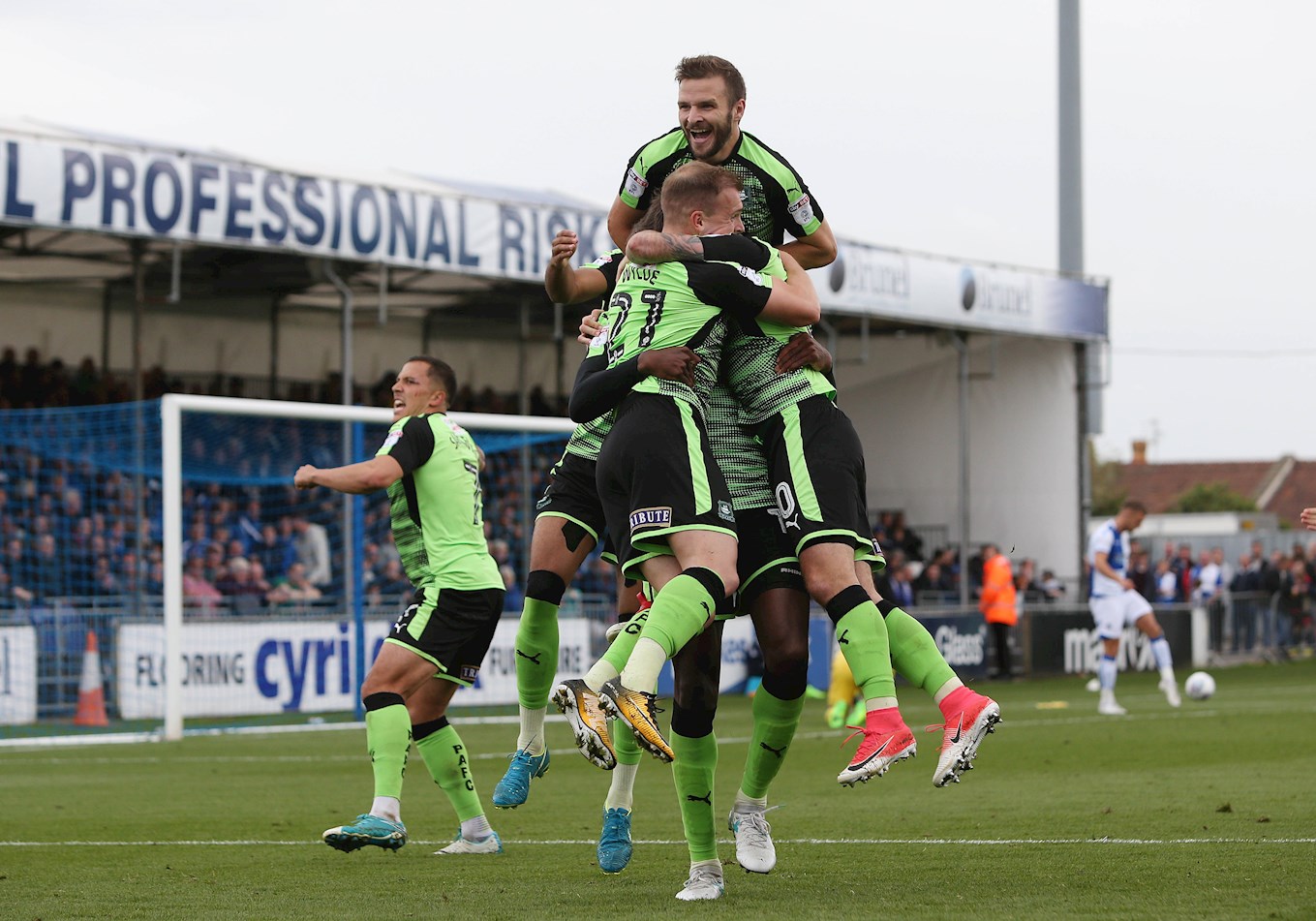 ARGYLE fan Chris Groves was one of 1,300 Pilgrims at the Memorial Stadium hoping desperately that the season could be kicked into life with a win against Bristol Rovers. As we all know, it was not – but he has not lost heart, and here, he tells you why...

EARLY on in Argyle’s game against Bristol Rovers, the hosts had a free-kick inside their own half.

Rovers defender Tom Lockyer opted to play a square ball to his full back. What he did not notice, however, was Graham Carey, standing directly in the line of the pass. Lockyer lazily played the pass straight towards Carey. With (understandably) no expectation of the pass coming his way, the ball rolled between Graham’s legs, denying him a one-on-one chance at goal, and went straight to the full back.

For me, that moment perfectly encapsulates Argye’s 2017-18 campaign to date.

Despite playing a division lower the last time Argyle paid a visit to Bristol Rovers, it’s fair to say that many of us were in higher spirits that day. Two Sky Bet League Two sides gunning for promotion met at the Mem in a physical, impressive game. Rovers had the early advantage and controlled much of the game, but a Pilgrims side full of heart and steel found a way to net a late equaliser, with Josh Simpson’s daisy-cutter finding the bottom corner, sparking delirium in front of a soaked Green Army.

Just two seasons on, moments such as those seem just about impossible to come by.

Over the past two seasons, only Brighton, among English football’s top four divisions, could match the cumulative amount of points Argyle had gathered. It was the kind of sustained success we had not seen in the best part of two decades at Home Park and, at least for one of those seasons, it was partnered with an air of expectancy when you arrived at a match. We expected to win.

It was not just points, either: unforgettable moments bullet-pointed that two-year run. Drama and glory in the play-offs; the somewhat clichéd ‘day out’ at Wembley; two clashes with Liverpool in the Emirates FA Cup; promotion and chasing a title. We have crammed more major moments into the last 24 months than the club has experienced in the last 24 years.

Some may find those moments a little frustrating to look back on, considering our current predicament, and understandably so. But days like those can become normalised and diluted when you experience them so often. Things have been very different over the past few weeks, and that drastic shift can be difficult to comprehend. Going from expecting your side to win to almost expecting them to not finish the match with ten men has been pretty tough for us all to adjust to. As extreme as those recent highs were, the mini-run of poor form Argyle are on feels equally extreme.

The upgrade in opposition is, of course a key factor in this shift, with two areas where a tangible difference can be spotted. The majority of League Two fixtures would see Argyle’s opposition be wasteful with the chances, whilst League One sides are much more clinical in nature. Energy levels are also up a notch, it seems, with much more pace and endurance for us to cope with.

Still, it is impossible not to place some of the responsibility on our own team. Discipline, concentration and ruthlessness have been lacking. Our red card total so far this season is already greater than the number we picked in the previous two campaigns combined. Our defensive resilience in multiple games last season which saw us heavily under pressure has gone missing at times, and our knack of converting chances has often abandoned us.

The talent is there. Anyone who watched us against Peterborough United, Charlton Athletic and spells of other games will tell you that we have the ability to compete at this level. It has to be something else, then, that is creating these problems. Perhaps that mental strength we exhibited last season has been chipped away over recent weeks. With confidence and momentum at a minimum, it becomes much more difficult to enjoy, anticipate or execute anything on a football field. That expectancy to dominate is replaced by anxiety about not being the next person to make a game-changing error.

Until something positive happens to eradicate all that doubt, teams get stuck in that rut. The words of Nathan Blissett after the Rovers game explain this perfectly. “One win. One scrappy win, and we’re back in it.” Performances matter not when teams are in a situation like this. They are simply desperate for something good to happen, no matter the circumstances, to kick them back into the positive mentality that guided them through the last two seasons.

Maybe it was time to look back to look forward, then – and there was a hint of this ideology when the team lines were revealed. Gregg Wylde made his first start since returning to Argyle, with Jake Jervis returning from injury to occupy the opposite flank. The same pair of wingers started our last game against Rovers. Blissett may not have featured in that game, but his selection possibly reflected that sense of going back to what we know: a physical presence in attack, similar to that which Reuben Reid, Jamille Matt et al have provided us in the recent past.

But the nerves were still clear to see. Argyle quickly dropped deep defensively and surrendered possession unnecessarily. Rovers capitalised and took the lead just after 20 minutes, as a reactive (instead of proactive) defensive line let a cross come in and fall to Rory Gaffney, who finished with poise.

That scrappy piece of luck that the Pilgrims are pursuing appeared to fall into their lap early in the second half. A Graham Carey cross was mis-hit and blocked, but fell straight to Blissett, who found the far corner with all the grace of an in-form marksman – impressive considering the aforementioned state of mind, not to mention it being his first goal of the season.

The cracks are never that easy to cover up, though, and old habits do indeed die hard. Argyle did not get back into shape during a Rovers counter, allowing Billy Bodin room in the box to score. An honest, but rash challenge from Gary Miller shortly followed and our ratio of red cards to league matches moved to just under one every other game.

When the inevitable bouts of head tennis concluded, Rovers were calm enough to look up and play a pass that gave them control. If the ball fell to a citrus shirt, it was all too often looped to nowhere in particular. We are obviously better than that; it is the difference in confidence and mental state that was making the difference. Antoni Sarcevic missed two chances that his more confident self would probably have buried in seasons gone by.

There would be no Josh Simpson-style late equaliser at the Mem. Sarcevic’s second chance came in stoppage time and rolled agonisingly wide, perhaps signalling the marginal differences that separate Argyle’s past glory and current struggles.

You are a football fan, so you would have seen countless sides go on poor runs like this. It has happened to us before and it will happen to us again. Perhaps our successes leading into this bad run have made it more frustrating and difficult to comprehend. Does it hurt? Yes. Do fans have a right to voice their displeasure? Absolutely. Listen to what any player says after these defeats, though, and you know that they are hurting just as much as we are.

All supporters want to know that their football club and the players they dedicate time and money to cheering on are listening to them; that they have a voice. Your collective voice has always been heard by the team; we have seen how it can inspire them to achieve great things. Now is the time when that influence you have is needed most. A struggling side needs a common goal to work towards, and if they can see and hear that the Green Army is still by their side, it could be the catalyst that eradicates those mental mishaps and lets the talent shine through once again.

Wycombe. Portsmouth. Liverpool. The examples of the power of the Green Army, inspiring Argyle to rise to the challenge. Now so more than ever, we need to make use of that power.