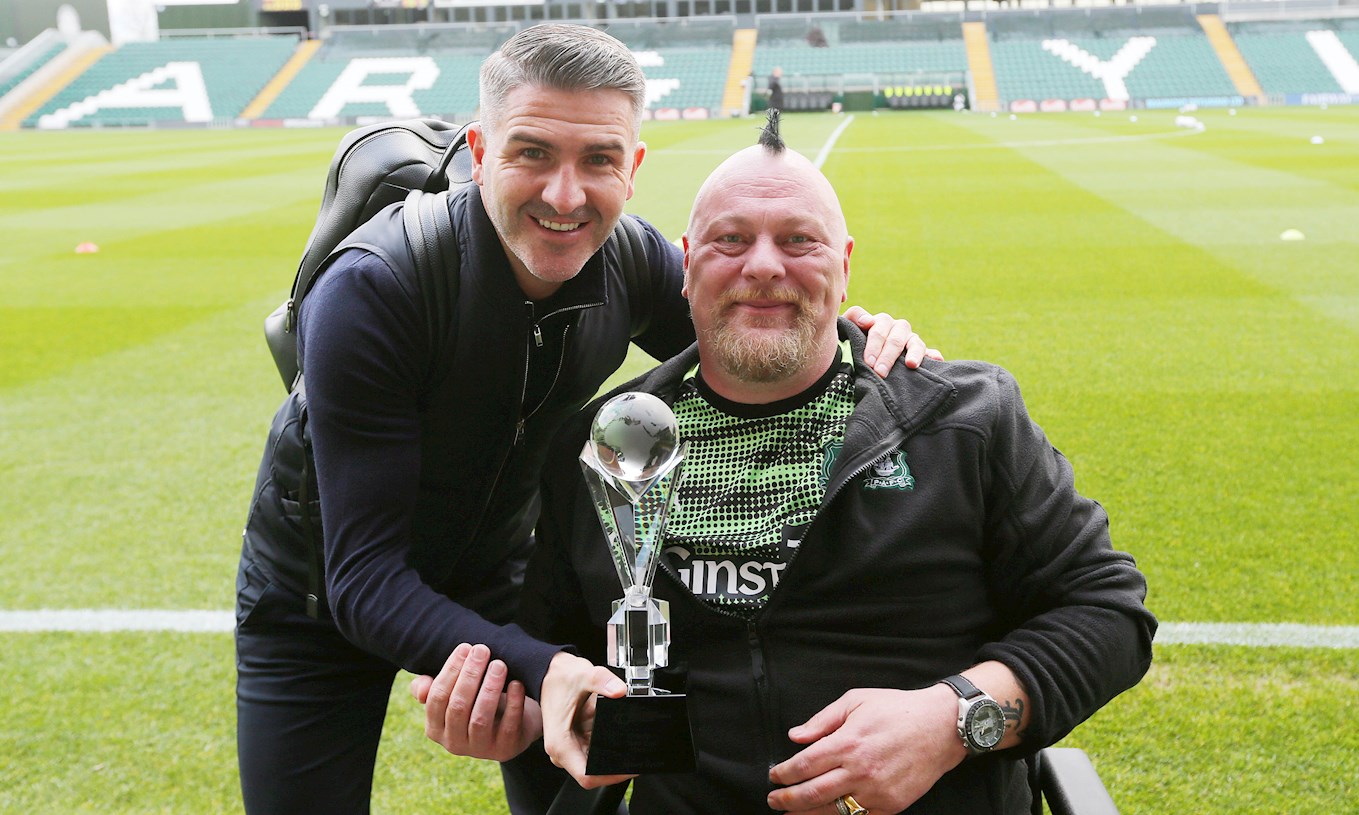 TUESDAY, December 3 marks the EFL Disability Day, here we pay a special mention to an inspirational figure, deserving of some recognition. That person is Argyle mad Snowy Dyson.

Snowy, a bilateral (below the knee) double amputee was a guest of the club at Home Park, where he watched his beloved Pilgrims beat Bradford City 2-1 in our most recent Sky Bet League Two fixture on November 23.

He was invited along to show off his World Disabled Darts Trophy that he had won after landing the winning double for England against Wales in a Disability World Cup which was the first of its kind, hosted in Belgium. The World Cup, an accolade which had contributed to elevating his position in the British rankings, and Snowy is currently the man to beat in the number one spot and is intent on establishing more players in the Westcountry, having founded the Disabled Dart League in Plymouth.

Snowy originally from Plymouth, served in the Armed Forces, after several tours which took him all over the globe, he started working security jobs at sporting events such as football matches, and of course, darts tournaments. The “Apache” as he is known in the darting sphere, started throwing arrows in 1992, and so too, did his love for the game begin to shine through. It was at those events where he would rub shoulders with arguably the greatest player ever to have graced an oche, Phil “The Power” Taylor, and several of his other darts heroes.

At that time, Snowy was able to play darts from a standing position, but that all changed in 2015. Due to complications from Type Two Diabetes, his leg had to be amputated. Adapting well on a prosthetic- and still remaining determined to throw darts- the infection had spread to his other leg, and a couple of months later, had to be removed from below his knee, too.

From speaking to the 49 year-old, you quickly gather that he combats his unfortunate set of circumstances with quick wit and a clever sense of humour, saying “I’m so glad I don’t get slippers or socks for Christmas anymore!”

He is certainly willing to explain his situation to anyone who is inquisitive, but it is fair to say he is much more keen to promote his positivity, and not least trying to gain some much-needed publicity for disabled darts.

“My situation is the way it is, I’m happy, joking about it helps I think,” he told me before the start of the game. “The main thing for me is that you just have to stay positive and get on with it. I’m still able to play darts, that’s what I love doing.

“In disabled darts, in terms of the actual game, the only difference is the height of the board. It’s 147 centimetres from the bull (the centre of the dartboard) to the floor. That way it makes it easier for people who are unable to stand up, to play. The aim is to get everyone playing. The problem is that there is not enough funding behind disability darts and searching for sponsorship is what I spend a lot of my time doing, but that’s so difficult,” he said.

Winning a major tournament in the able-bodied circuit can yield hundreds of thousands of pounds in prize money. Sadly, the same cannot be said for Snowy, or indeed anyone with a disability playing darts.

“You are number one in Britain, having just won a world title, the prize money must be good?” I said. Not so much interested in the numbers, I was curious to know if it was possible to make a living from the sport. “No, prize money is not good, because there isn’t any” was the reply. “In fact, I’m actually financially worse off. For every event I go to, I pay to get there, and I pay for my own food and accommodation. Over the year, that is not cheap because I could be all over Europe.” he says. “I don’t think enough people are aware of disabled darts and the commitment we give to it. Geographically, if you look at the UK, from Birmingham down to the South-west, I’m the only one who plays.“

Snowy had a short chat with the hospitality guests prior to kick-off, and on the park, goals from Byron Moore and Joe Edwards secured a big win. It was a pleasure to welcome Snowy to the Theatre of Greens to recognise his achievements.