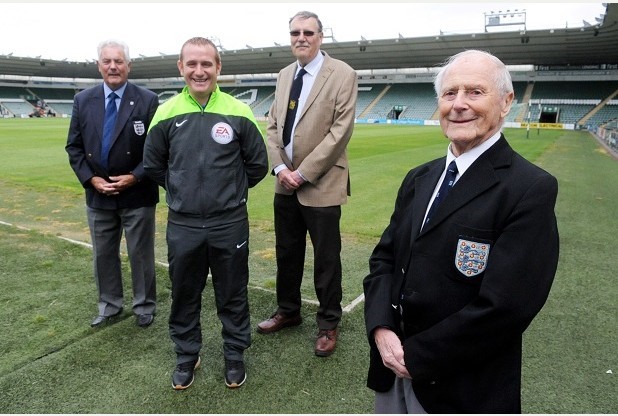 The club is saddened to learn of the passing of former referee Charlie Nicholls.

Plymouth-born, Charlie is forever associated with one of the most famous matches in Argyle history, officiating the 3-2 victory over Pele’s Santos in March 1973.

Nearly 40,000 fans were packed into Home Park for the match of a lifetime, and Nicholls would officiate another international fixture at the Theatre of Greens a few weeks later, as England amateurs defeated Finland 3-0 in front of just shy of 1,500 people.

A regular visitor to Home Park in later years, Charlie joined two other Plymothian Football League officials for a pitch-side photo in 2015 (above, with Charlie on the right of the picture), standing alongside 80s referee Alan Crickmore and current EFL referee Lee Swabey, who made his league debut the year that photo was taken.

Our thoughts are with Charlie’s family and friends.