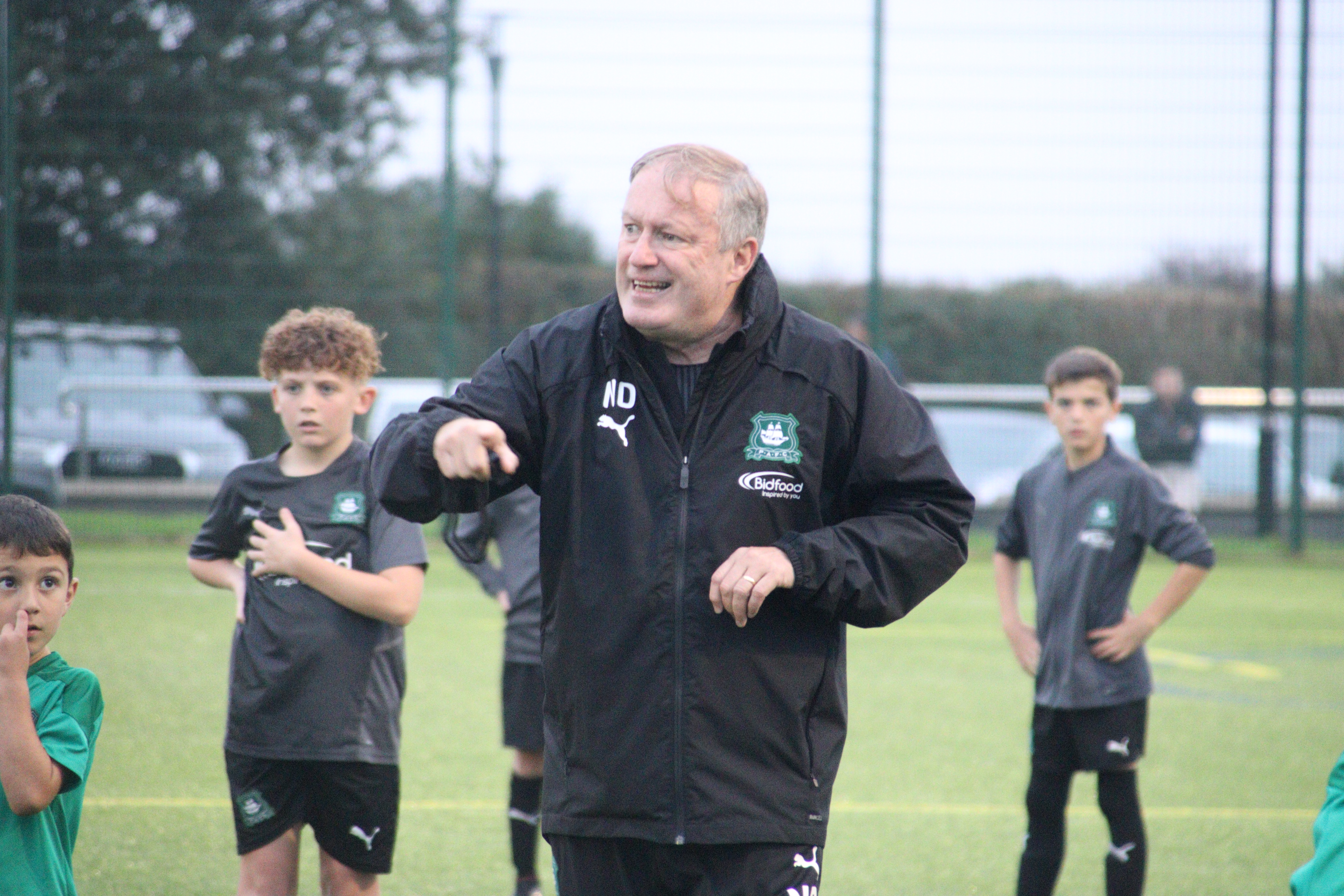 Cornwall Project off to Flying Start

Argyle’s ambitious vision for the long-term future of football in Cornwall took a huge step forward last week with the launch of the first of two Elite Coaching Hubs in the county, delivered in partnership with Cornwall FA.

The Elite Coaching Hubs, with an eastern site based at Callywith College in Bodmin and western in Penryn, form a crucial part of the Pilgrims’ strategy to develop grass-roots football in Cornwall, and provide greater depth of opportunity for youngsters to progress into the club’s revamped Academy set-up.

Argyle Director of Football Neil Dewsnip was joined by First-Team Coach Kevin Nancekivell and Cornwall Head of Recruitment and Development Paul Rowe, among many other Argyle representatives, to deliver a core skills workshop with Cornish coaches and players at the Bodmin Hub's inaugural meeting.

Dewsnip said: “It’s been a really successful evening, working with some of the best young players in Cornwall, which is a huge part of our strengthened partnership with the Cornwall FA.”

The launch of the new Elite Coaching Hubs also coincided with the beginning of Cornwall FA’s new Coach Development Programme, which will offer a mixture of online and face to face coach development events across the season.

Cornwall FA will be working in partnership with Argyle and The FA to deliver coach development events with the aim of enhancing the invaluable work grassroots coaches already deliver across Cornwall.

Neil said: “We’re helping the coaches of Cornwall to improve, showcasing what we do at Argyle’s Academy, and, obviously, we’re looking at the talent. We want the best talent in Cornwall to play for Argyle.”

While Argyle’s strategic focus to have more home-grown players progressing through to first-team level is clear, the partnership with Cornwall FA is also about giving Cornish youngsters the opportunity to develop, and providing access to professional-level coaching without having to travel for hours and hours to get it.

Neil continued: “We feel it’s really about giving the opportunities, and that opportunity should be with Plymouth Argyle. We hope if we can find the right talent, we can help to develop it in Cornwall.

“The distance from some parts of Cornwall to Plymouth is obviously quite large. We’re asking some of our young players, from the youngest ages, to come four or five times a week. That’s just unrealistic for some families in Cornwall, so what we’re trying to do is help bridge the gap by having our two centres in Cornwall. It’s about opportunity.”

Kevin Nancekivell, whose role at Argyle includes overseeing technical development in Academy players from under-23 age downwards, said: “I’m hugely excited to see all the boys enjoying themselves, running around and playing football in their Argyle shirts at this fantastic facility.

“We’ve launched the Cornwall project, which is what we set out to do, and this centre along with the Penryn one is going to be massive for our football club, our Academy, and for the future of football in Cornwall.

“I was an Academy coach before I became involved in the first-team. It’s important because there’s so many boys in the West Country that don’t get an opportunity, and I am passionate about giving them an opportunity.

“We want to get more boys into the Academy from Cornwall, rural areas all over Devon, and, ultimately, we want more boys from the West Country in our Argyle first-team, which we’re all passionate about.”

Daniel Greenough, Football Development Manager at Cornwall FA, said: “We’ve had a close relationship with Argyle, both the Academy and the Community Trust, for a long time.

“I’ve seen a big culture change. Having people like Neil [Dewsnip], Nance [Kevin Nancekivell]  and Lee Hodge [Academy coach] down here – that gives pulling power, it’s brilliant to have that involvement. It’s not a token gesture, we’re here to improve the opportunities for players, coaches and volunteers in football across Cornwall.”