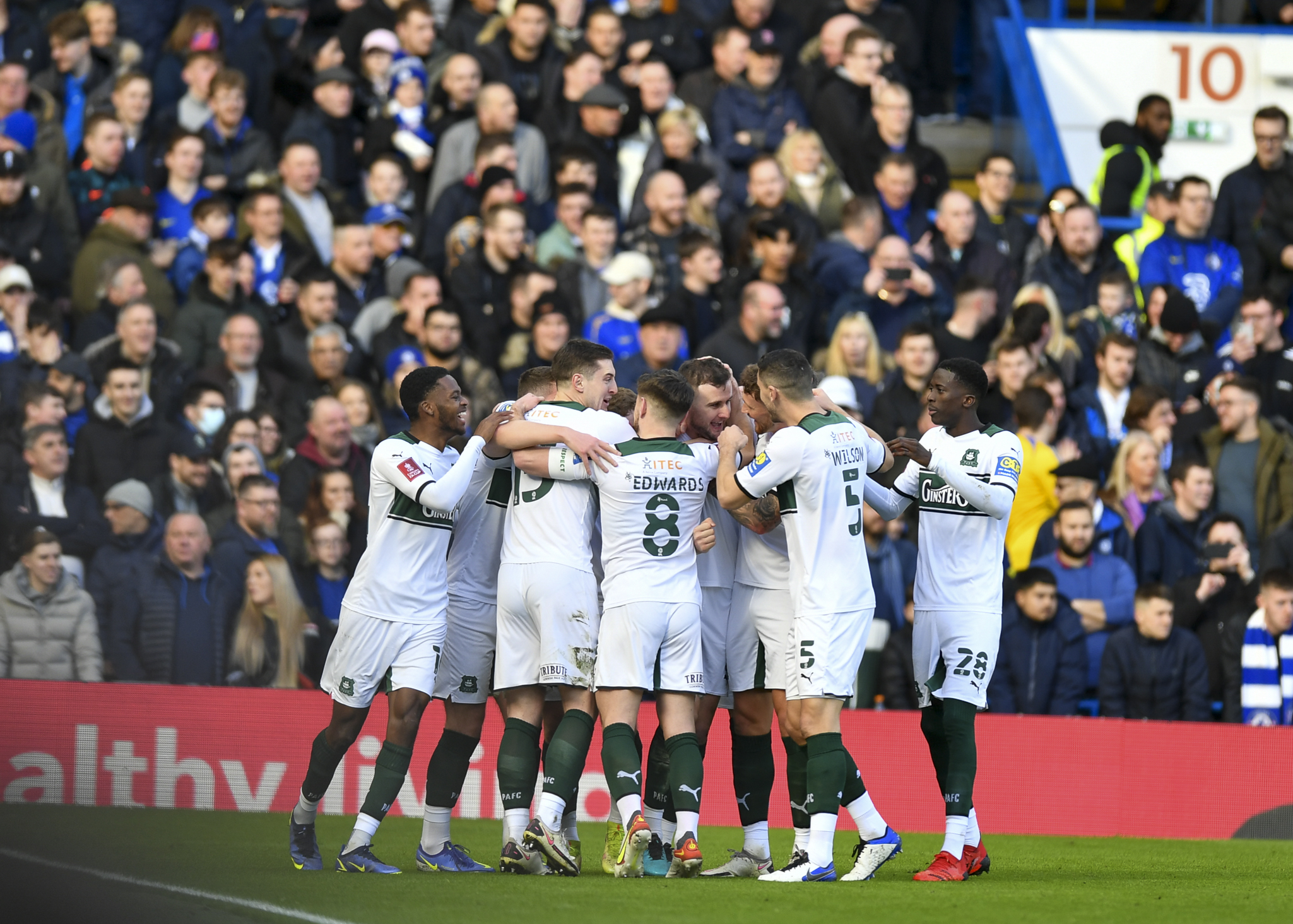 Green is the Colour

With the Greens' Emirates FA Cup tie at Stamford Bridge broadcast on BBC Red Button, Argyle TV commentator Rob McNichol had the rare opportunity to swap the commentary gantry for the press box on Saturday. Here is his take on a remarkable day in the capital.

On 65 minutes, Plymouth Argyle got a corner at Stamford Bridge’s Shed End. Never before has a referee pointing towards a flag been greeted with such rapture.

It was some moment.

Some 6,000 or so Argyle fans, occupying the famous Chelsea stand, had watched the second half to that point from a distance of approximately 120 yards, as the European Champions and their all-star cast lay siege to Argyle’s penalty area, at the other end.

My uncle was a West Ham player then, and I was in the away end to watch The Irons at Stamford Bridge. Had I had any clue of the hostility between the two capital sides, I might have been apprehensive. Instead, I watched in awe as Gavin Peacock put the hosts ahead, before Julian Dicks equalised for West Ham.

With me was my father, essentially neutral, but with a bookmaker’s docket saying ‘1-1, Peacock to score first’. He was the only person amidst the claret and blue throng not celebrating when Danny Williamson gave West Ham the lead, which they would hold on to.

With a familial connection to West Ham, I was lucky to watch many great players live: Beckham, Klinsmann, an emerging Rio Ferdinand. None, though, compared to Ruud Gullit. In my memory of that game, he is about eight feet tall, towering over all else on the field.

A year or two later, Gullit was Chelsea manager, and brought his new Blues to Home Park, where I tried in vain to get his autograph. How special it was to me, though, to have those experiences as a pre-teen fan.

I tell this tale for a couple of reasons. One, because I am spooked by the fact that, as I write, about an hour before kick-off, my seat in the Press Box is eerily close to the spot where I stood 26 years ago, although the ground is virtually unrecognisable. The second is because those memories feel so vivid to me, and I think it is wonderful that the youngest generation of Pilgrims get a moment like this in their life.

Never mind that Liverpool away was only five years ago. That’s a long time when you are young. The five-year-old who was too young to attend on that occasion will be 15 next time, if there is a similar five-year gap between these kinds of days out. While you can still enjoy it at 15, the sense of wonderment would probably not be quite the same.

From a playing and management perspective, Steven Schumacher and others are spot on when they suggest this is probably the least important game for the rest of the season. I am sure we would all trade in this game for Sky Bet League One success at the end of the campaign, but the two are not mutually exclusive. The Liverpool draw, one notes, came in a promotion season.

Similar sentiments go for the scoreline. The players have a point to prove against lofty opposition, both as a team and individually. However, for the rest of us, we really can enjoy the occasion over the performance. This is not Wembley ‘16, where defeat meant another season toil in the league you were trying to escape. It’s certainly not Rochdale. I only have to hear anyone mention Lisa Stansfield or the Co-op and I am reminded of the stomach-churning day in Lancashire when we nearly exited the EFL the wrong way.

Driving to London this morning, I considered a strange feeling that I had, in that I could not quite work out what kind of Chelsea line-up I wanted them to select. As weak as possible to give us a chance of winning? Or if we were going to lose, best to do it to a strong-looking line-up, so as not to lose any face? And it would be nice to see some world-class players close up. Either way, I imagined the most likely scenario to be a side consisting of players who were clearly outstanding individuals, but found themselves just outside Chelsea’s first eleven at the moment.

But I have just been handed a team-sheet. Apparently not.

Thomas Tuchel has shown Argyle a large amount of respect by essentially selecting his strongest team. Only Thiago Silva is missing from the Chelsea team that played Tottenham in their most recent Premier League game. It could be a long afternoon.

The above was all written as kick-off time approached. I leave it unedited as a true reflection of how I felt before the game unfolded. It turned out to be a longer afternoon than I had anticipated, but for an entirely different reason.

The two most comparable Argyle matches of my three decades or so of being a Pilgrim - Liverpool in 2017 and Arsenal in 2009 – both contained something we could emerge clinging to. Anfield the draw, prompting a replay, and Arsenal the fact that we scored and made it a game when it went 2-1. Even the home game against Liverpool had Luke McCormick’s penalty save.

All I wanted from this game was that similar feeling. That we were competitive, that we showed the watching world what we are about. Maybe even a goal?

I could not have dreamed about what I would see unfold before my eyes.

I did not celebrate the opening goal at Stamford Bridge. Part of that is a certain amount of press box etiquette, but it was mostly because I felt a combination of numbness and disbelief. After about a minute of watching the Green Army celebrate, and the peculiarity of a VAR check, I just started laughing. I could think of no other response to this entirely ludicrous situation. Had I not been wearing a mask I could easily have been mistaken for a braying madman. If the men in white coats do come for me, I shall insist on them adding a green hoop to their jerseys.

The little moments kept on coming.

The European Champions League-winning, European Championship-winning, Ballon D’Or-nominated Jorginho, went into the referee’s book for cynically pulling back Luke Jephcott. Promising England winger Callum Hudson-Odoi, who by the way has more Home Park goals than half of Argyle’s team, burst clear down the flank, only to be shepherded out of play by James Wilson, in front of a jubilant away end.

Wilson is, of course, part of the Argyle international contingent that rivals that of Chelsea. James made his only Wales appearance in 2013 – against a Belgium team including Romelu Lukaku, by the way - while of course we have Panutche Camara, whom we adore, but who it ought to be noted has three caps, and has been an international for just over a fortnight.

Look, let’s not pretend that the first half was anything other than Chelsea trying to unlock Argyle’s door, but using a hotel swipe card when it was actually a Chubb lock. They hit the woodwork three times before Cesar Azpilicueta’s flick levelled the match, and we went in at 1-1.

The next I recall is looking at the clock on the ground’s big screen at 83 minutes, and blinking. How could it say ‘83’, when the game clearly kicked off approximately 11 hours previously? Or was it two minutes? This was both torture and sheer pleasure

The moments had carried on. From the corner mentioned at the top of this article, Chelsea broke clear, and looked certain to take the lead. Somehow, Joe Edwards summoned enough energy to get round to foil Kai Havertz. Amazing.

Mike Cooper then made a save that defied everything: logic, belief, gravity. Mason Mount’s shot was surely goalbound, but at a ground the likes of Bonetti, Courtois and Cech have graced, few better saves would have been pulled off. For a perfect follow-up, Coops rose to catch the corner, imperiously.

With more desperate blocks than a high-level game of Tetris, Argyle’s heroes saw the game to the 90-minute mark, and though it felt like a bit of a shame not to have a showpiece replay at Home Park, what a thing this was, to say that over a 90-minute period, the champions of Europe could not beat Plymouth Argyle.

Schumacher and his team gave their players an unexpected third team-talk of the day. Meanwhile, I logged on to my parking app of choice to extend my parking period. I had not factored in 30 additional minutes.

And then Marcos Alonso scored and all those dreams we had begun to give credence to evaporated. But for 105 or so minutes, what a time we all had.

You do not need me to discuss the events of Argyle’s late penalty. Such hopes elevated and dashed in such a short time, even with a VAR check. Just note that despite his spot-kick being saved, Ryan Hardie’s name was still sung adoringly by the Argyle – and I mean this next word – faithful. One 12-yard miss does not change the way we feel about him. He’ll score Tuesday night. Just watch.

It would be easy for a supporter of a big club, Chelsea or otherwise, to mock how giddy I may have sounded here, but the difference between these two teams is not just two divisions. In truth, League One Argyle are not that much smaller a club – if at all – than some Premier League sides. But the step from Premier League probables to a worldwide mega-club, on a level where you are a global franchise, your brand recognisable in every country, is quite something else.

Chelsea might well win the FA Cup this season. If and when they do, they might not even remember who they played in the fourth round. But when they are reminded, they might just recall when Plymouth Argyle, of League One, gave them a fright.

If only for a moment.