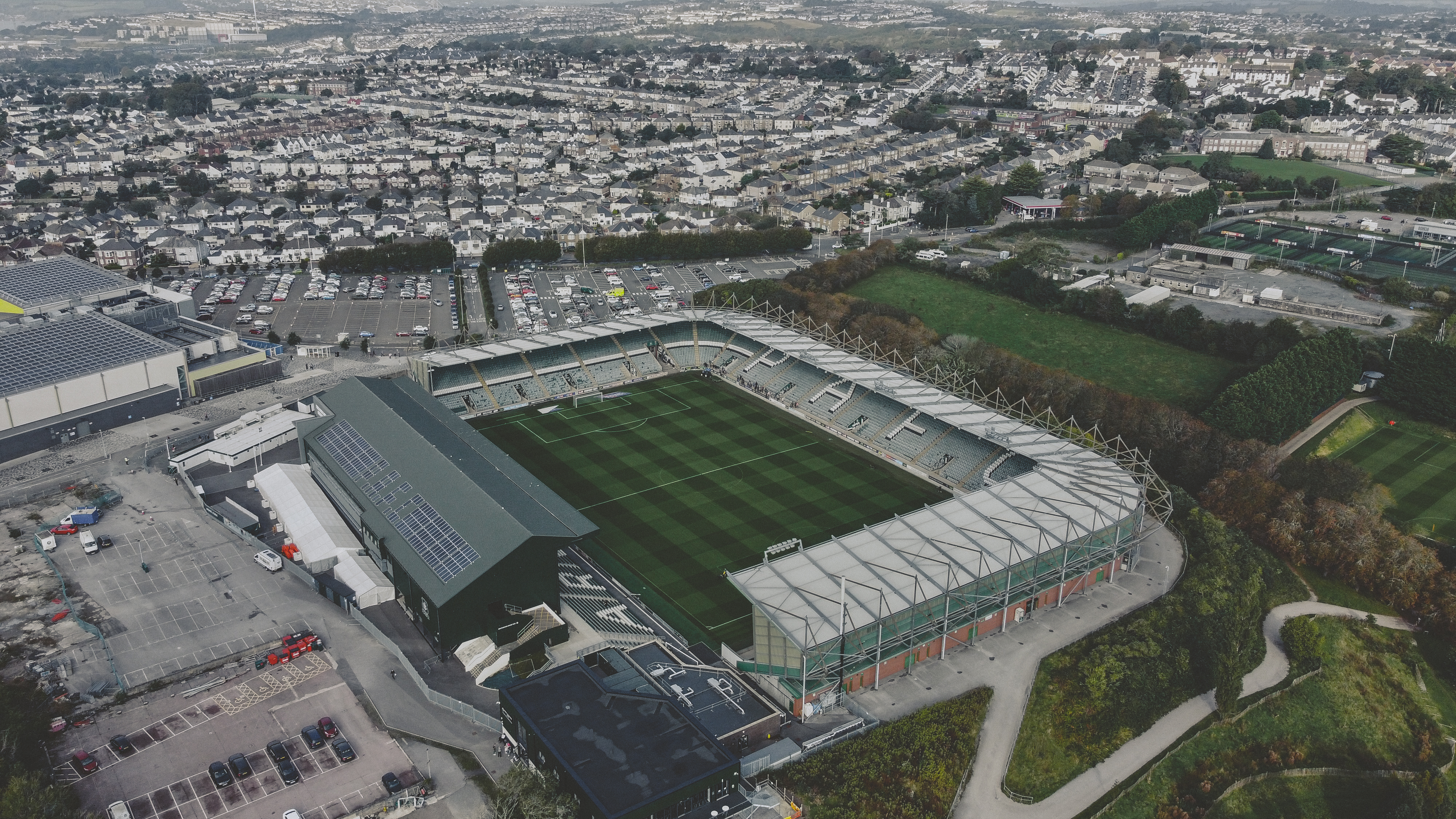 The next stage in the club's stadium improvement project begins next week, with substantial works taking place to redevelop the club car park and associated facilities adjacent to the Mayflower Grandstand.

Higher Home Park - the section of land reacquired by the club in 2019 which stretches alongside the Mayflower Grandstand to the Home Park Ticket Office - will be levelled and resurfaced in order to provide nearly double the amount of parking spaces for players, staff, and match-day officials, as well as reducing pressure on the Park and Ride car park used for supporters. In addition, the works will see the installation of 10 electric vehicle charging points, and significant improvement to the look and feel of the entire approach to the stadium from the Central Park direction.

The project, awarded to contractor Ryearch, will begin on Tuesday, 10 May, and is scheduled for completion before the first competitive game of the 22/23 EFL campaign at Home Park.

Additional infrastructure improvements in the area include the installation of a bin store, bicycle store, new lighting, enhanced CCTV, and hostile vehicle barriers in areas of high footfall – including the Home Park Ticket Office and Argyle Superstore.

Meanwhile, a whole host of aesthetic changes will also be introduced, including the installation of new trees, planters and other soft landscaping enhancements. In addition, large club-branded hoardings will also be erected around the land adjacent to the Life Centre which is not owned by Argyle.

For vehicles, the repurposed space will offer an increase in the number of disabled and motorcycle parking bays, as well as clearer designation of a cycle path alongside the Home Park footprint.

For the duration of the works, access to this area will be prohibited, although exceptions stand for events use at either the Green Taverners Suite or within Club Argyle. In each case, event organisers will make contact with guests ahead of time to organise access. Supporters will be able to access all club facilities, including the main Club Reception within the Mayflower Grandstand, the Home Park Ticket Office, and the Argyle Superstore, as usual.

Argyle Head of Venue, Christian Kent, said: “This is a really exciting opportunity for us to vastly enhance the public realm outside of the stadium, and it will really help elevate the way Home Park looks and feels on the upper side of Home Park.

“For a long while, work like this has been considered a ‘nice to have’, but the club management and Board of Directors appreciate the value of enhancing all areas of the stadium – inside and outside – to maximise the supporter and guest experience, and we are very excited to be moving forward.”

Mark Wildman, Managing Director of Ryearch, said: “Ryearch is delighted to be awarded this important infrastructure project for Argyle, and be an integral part of regenerating Home Park.  As a leading regional contractor, this regeneration of one of Plymouth's landmark sites represents an exciting opportunity for Ryearch and we are proud to be involved with it; not least because our own team includes many Argyle fans!”

The car park work follows the beginning of a seat replacement project, delayed until the summer due to supply issues, as well as the installation of energy-saving LED lighting throughout the stadium.

The stadium improvement project will not be limited to developments outside the stadium this off-season, though, and the club encourages supporters to keep their eyes peeled for a giant, high-definition announcement to follow next week.