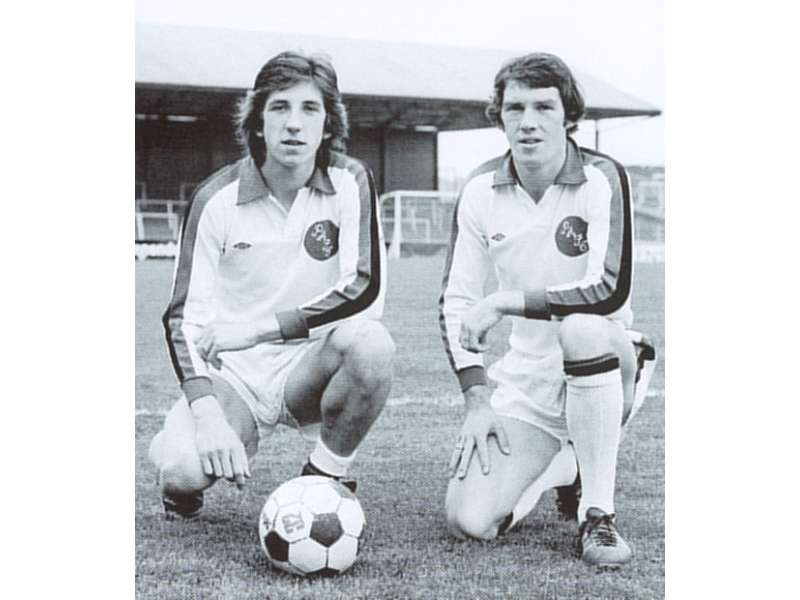 Very rarely in football do you find the sort of relationship that Paul Mariner and Billy Rafferty had and fortunately for Argyle supporters, we saw them at their best.

Between them the pair scored 101 goals for Argyle in what is the most prolific strike partnership the club has ever seen.

But what made that relationship so special? What was the secret behind the legendary Mariner Rafferty partnership?

Well, the answer isn’t a simple one, in fact it took a little while for the prolific goalscoring duo to hit if off.

Billy arrived at Home Park six months after Paul, making the journey south after spells at Coventry City and Blackpool and remembers that the first few matches in a Green shirt were not the easiest.

“I don’t think Paul played when I made my debut for the club, I think he might have had an injury.

“In fact, when I arrived I was playing with a knee injury and didn’t feature very much, I don’t remember too much about my first five matches for Argyle.

“The Mariner Rafferty thing didn’t get off to the best start really.”

But this was just the beginning, like any good relationship you need to get to know each other before sparks begin to fly and in the summer of ‘74 the flames begin to ignite between Argyle’s deadliest duo.

“I got myself fit in the close season and by the time all the other players came back for pre-season I was as fit as a fiddle.” Billy said, “It was during that pre-season that Paul and I got to know each other.

“Our games were quite similar and you would think on paper that it wouldn’t work but for some reason it was just like an uncanny relationship on the pitch.

“We always seemed to know where one another where and we very rarely got tangled up in each other’s space.

“We just loved coming in every morning, training together and playing – everything just seemed so easy. I never had that relationship with any other player again.

“It was something very, very special”

Special? It was legendary. That season has gone down in folklore as being the ‘Dream Season.’

Both players scored over 20 league goals in a campaign which saw Argyle promoted to Division Two and thrill the fans in the process.

Regularly Home Park was packed to the rafters with up to 30,000 people packed in to watch Billy and Paul.

Argyle were the entertainers, playing attack minded football, on the front foot and winning games with ease. It all just clicked.

“Paul was like another brother to me. Whenever you’re in Paul’s company you would always leave with a smile on your face, he was such a buoyant character and I think that helped when we played together.

“It’s funny because Paul said to me a couple of years ago that during that season there weren’t many games when we both scored and it worked out that it was a better way. If you’re spreading out when you’re scoring your goals.

“I remember Tony Waiters being so excited when I signed because he was sure that Paul and I would hit it off you know and as it turns out, Tony certainly knew his stuff that’s for sure.”

The following season Argyle held their own in a higher division and again Mariner and Rafferty were causing problems for defenders. Both got into double figures in the league as the Pilgrims finished 16th in Division Two.

Other clubs began to take notice and the 1975/76 season would be the last time that Paul and Billy would take the field together for Argyle.

That summer Billy left to join Carlisle United, and while Paul stayed for another six months it wasn’t long until bigger clubs came sniffing, Bobby Robson and Ipswich Town his preferred choice.

The move to Portman Road was the springboard Paul needed, after a season with the Suffolk club he was picked to play for England and the rest, as they say is history.

Billy believes that move was the making of Paul, “The move to Ipswich was the best thing he ever did.

“Bobby Robson was a massive reason why Paul went there and was great for Paul, he liked working with front players and I’m sure Paul benefited from him.”

Even though we never saw them play with each other again, those two full seasons were enough to build more than just a legend, it built a solid friendship and one that lasted long after their playing days.

Billy said, “We were good pals, very similar. We weren’t in constant contact though.

“Paul has been in the United States and I was over here but when we get together within minutes we’re back to all the banter and it’s as if we’ve never been away.”

And that friendship lasted until the end, Billy and his wife Elaine went to see Paul just days before he died, something that both Paul and Billy found comforting.

“It came as a big blow when I found out about Paul’s illness last year. We went to see him before he died and I was so pleased we did.

“He wasn’t able to talk but you could see there was a little smile out of the corner of his mouth. He knew what was going on and what we were saying. It was great to see him but so very sad.

“He was a very talented man, the media work and presenting that he did for ESPN was incredible, I’ve seen videos of what he has done out there and how much he’s respected by the American public. He’s a big name out there.

“That pretty much sums Paul up I think.”

If Rafferty doesn’t get you Mariner will.