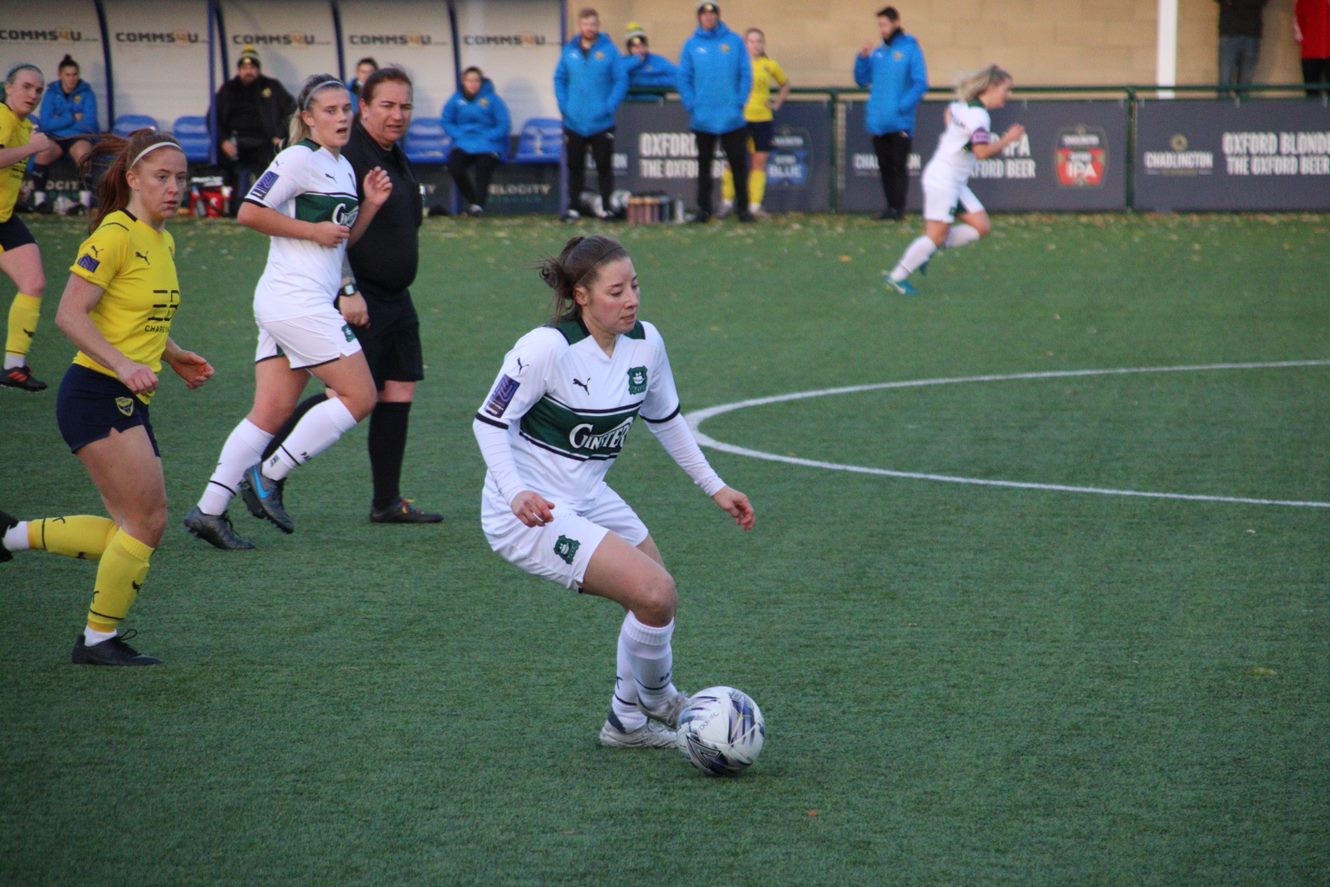 Plymouth Argyle Women put in a determined and battling performance in their 3-0 defeat against Oxford United.

While the scoreline didn’t go their way, no one could doubt the determination and commitment of the Argyle players who put everything into the game.

The versatile Tracey Cross dropped into the back five as Argyle set themselves up to defend and play on the counterattack against Oxford. Oxford saw most of the ball in the opening stages as Argyle settled into their shape. Oxford worked the first chance of the game in the 6th minute after a loose ball fell to Panting, but she could only fire wide of the near post.

Argyle defended well and restricted their opponents to very few opportunities. In fact Argyle nearly took the lead in the 18th minute. Perrin whipped a cross into the Oxford box, which Alexander in the Oxford goal spilt into the 6-yard box. The ball nearly fell to Zoe Cunningham, but it was agonisingly out of reach of the Argyle midfielder.

Having nearly had the chance to take the lead, Argyle were unfortunately punished 2 minutes later when Oxford took the lead. A cross into the Argyle box deflected off an Argyle defender and fortuitously fell to Panting, who did well to fire the ball into the bottom corner to give Oxford the lead.

After the goal, Argyle continued to restrict Oxford to very few opportunities until the 42nd minute. Lumsden found some space on the edge of the box, and her shot drew an incredible save from Poppy Soper, who somehow palmed the ball away for a corner.

Then from the resulting corner, Oxford managed to double their lead. Oxford swung the corner towards the far post and found Mackenzie, whose header struck the Argyle post and rebounded to Casley, who tapped home to extend Oxford’s lead on the stroke of half-time.

The 2nd half continued in the same vein as the first, with Argyle defending resolutely and restricting Oxford from having any chances of note. Argyle actually put together the best passage of play in the 50th minute when they played the ball from back to front to find Cunningham in space at the edge of the box, but she was prevented from getting her shot away by a last-ditch tackle from Beaver in the Oxford defence.

Then in the 56th minute, Oxford got their third goal. After Lumsden burst into the Argyle box, Cross got back to tackle her, but the ball unluckily rebounded back off of Lumsden and into the Argyle net with nothing the Argyle defence could do to stop it.

After the goal, Argyle went in search of a way back into the game, and Cunningham again tested Alexander in the 71st minute, but the Oxford keeper did well to hold onto her powerful strike.

Argyle continued to defend well but couldn’t find the goal to get back into the game. Despite the scoreline, it was a positive performance from Argyle, who on another day with a bit more luck could have gotten a result. Instead, the Pilgrims will look to next weekend when they take on St Austell in the Vitality Women’s FA Cup and attempt to get back to winning ways.