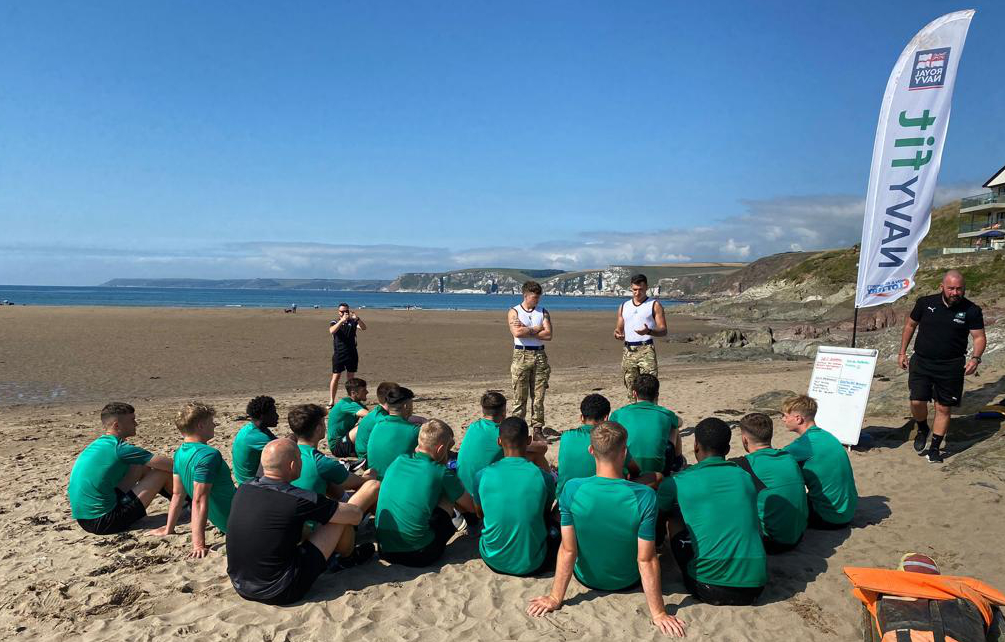 The next generation of Argyle talent were put through their paces by the Royal Navy in a gruelling training session last week.

Youngsters in the Academy took part in a military experience afternoon under the watchful eyes of two physical training instructors from HMS Raleigh; the Royal Navy’s new-entry training establishment in Torpoint.

The training took place at Bigbury beach, where the players experienced training similar to that undertaken by Naval recruits during their 10-week initial training course at HMS Raleigh.

Highlights included the ‘stretcher run’, while wading through the sea, casualty evacuations drills, which included recovering two casualties over a three-kilometre distance.

The players also experienced training known as Battle PT, which consisted of more casualty evacuations, leopard crawls and sit-ups in the sea.

Argyle Academy Manager Phil Stokes said: “We were delighted and grateful to the instructors from HMS Raleigh for coming to put the lads through their paces – it was a tremendous experience.

"It sometimes gets forgotten that part of the scholars’ development is to gain experience and lessons from other walks of life, and this certainly offered a small insight into the rigorous preparations that are required of our Servicemen and women. As a club representing a proud military city, it was fantastic.”

Leading Physical Training Instructor Kyle MacDonald said:  “The afternoon concluded with briefs on emotional intelligence and critical thinking to engage a greater teamwork output both on and off the pitch. The Argyle lads performed to an extremely high standard throughout each serial, attacking them with confidence and a great mindset both as a team and as individuals. It was a fantastic opportunity for us all, and they definitely seemed to enjoy the afternoon’s events, as did we.”