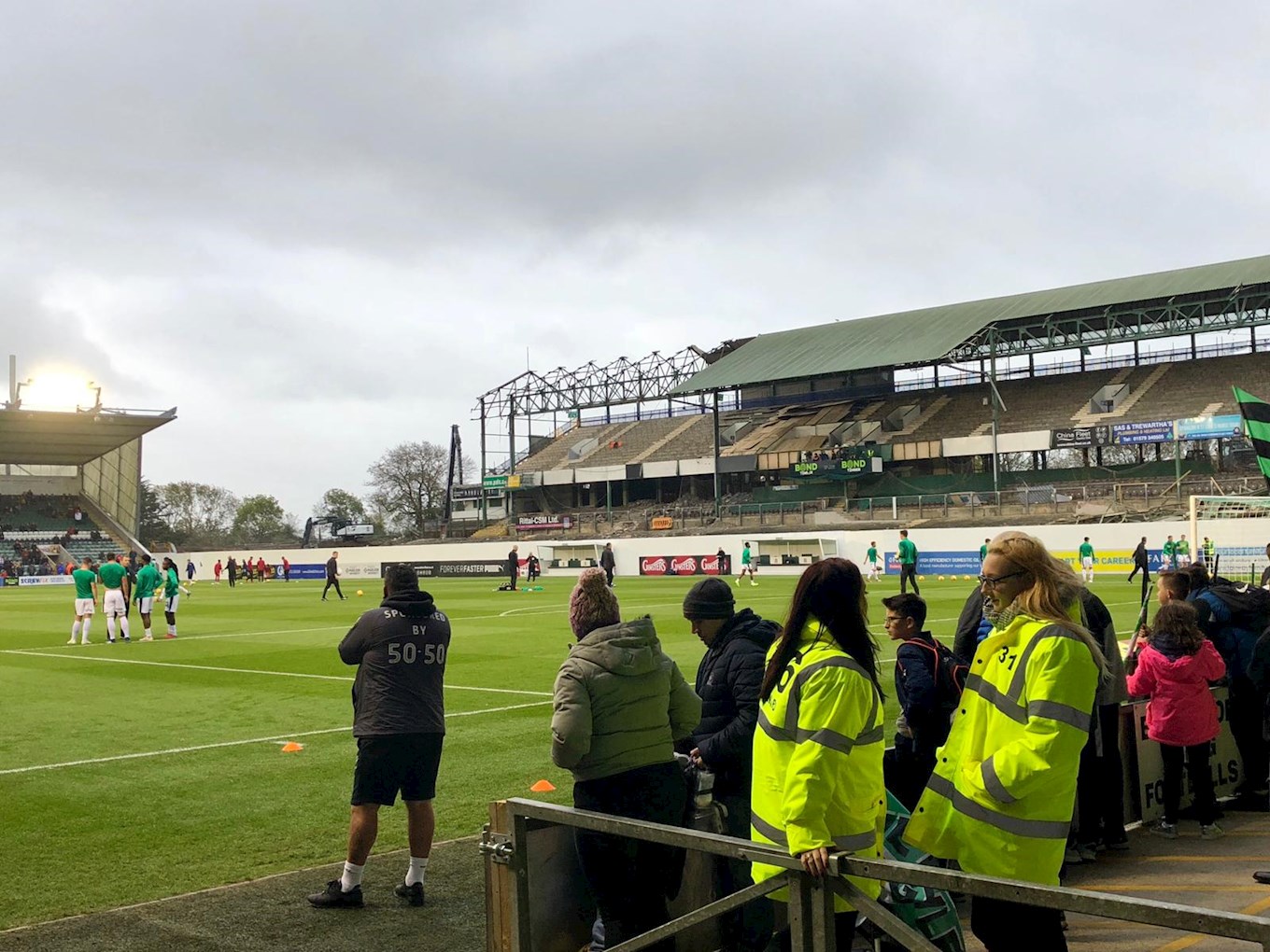 TO some, it may well feel like a lifetime ago that we started this project, but having signed the main contract only on August 9 – my 51st birthday, incidentally – and with a 14-month programme, we are just three down, with 11 to go. Crikey.

During my time on our project, I have had the benefit of speaking with my colleagues up deep North in Exeter, and it has been really interesting to compare timescales and similarities for these two huge projects. There were more than two years of complex negotiations before the work at St James’ Park started in May 2017, with demolition of their old stand commencing in the following October – as such, its grand opening last weekend was a real achievement.

The demolition at Home Park is trickier as, of course, we are keeping the super-structure of the 1950s Leitch-esque grandstand, which means that our contractors are having to proceed with more care than if they were simply razing it to the ground.

That said, anyone who has been up to the Theatre of Greens in recent weeks, or has seen any of the photographs that have been published, cannot be anything other than astonished at how much has now happened.

I have felt sorry for the old gal before, but seeing her in the state she is in now is a sad sight indeed, but – employing cliché number 19 – eggs, omelettes, etc.

There has been a lot of other work going on, too – we have made a design change to the new dressing-rooms which gives us a bigger home changing-room, a touch more storage, and a wider access road into the stadium between it and the Barn Park End – and, as you would expect, all of these changes were agreed under the gaffer’s hawk-like gaze. Construction of this facility has now started, with the foundations being laid last week.

The granting of the full, revised planning permission for the new supporters’ bar has now also been received, which means that our great friends the Green Taverners are about to crack on with this exciting part of the project. It has been a touch frustrating, having to wait this extra time, but the amount of extra space that these revised plans will give us, over and above the designs that featured in the original planning permission that the club secured, will be well worth it.

There have also been a couple of small delays within the project – the most obvious being that the new Superstore and Ticket Office did not open when I expected them to. There are a couple of factors at play here, the main one being that we delayed taking possession of the buildings until a number of snagging issues were resolved which, in turn, knocked out the schedule for the shop fitters to come in.

The manufacture and delivery of the ticket office windows has also hit a delay, but these should be installed in the next week or two. So, all understandable from an objective perspective, but I must say, I am disappointed. As we have our old shop and ticket office still up and running, it is not mission-critical but nevertheless, as we move forward, this needs to be an anomaly, not the norm.

We are currently revising the opening date of both the new shop and ticket office and are confident that it will be physically ready just before Christmas. However, given that this is possibly the busiest time of the year, our plans at this time are to hold the grand opening as a New Year event. I am sure that Rachel, Nicki and their wonderful teams will keep the mulled wine warmed for you, so make sure you keep some of your festive present money set aside!

The webcams have also been causing more angst than they should – apparently our Wi-Fi, the cameras, our private, firewalled intranet, and the EFL platform are having hand-to-hand combat. My excellent techie guru – Andy B – is on the case though and we are hopeful that we will have you back discreetly viewing the goings-on from a variety of angles from a corner of your desktop monitor at work very soon.

Going back to the design changes, we are also looking at installing Plymouth limestone material around the entrance to what will be the new club reception. This will also be echoed on the front elevation of the supporters’ bar. The idea of this is that it ties in our development with other developments happening across our city. We are also looking at having a brise soleil (never heard the expression before, so look it up – I had to!) on the main rear, extended elevation of the grandstand which will both look really smart, and will help keep internal temperatures lower when the Devon sun beats down. I will share drawings of these with you, once they have been finalised.

A blog or two ago, I gave an update on the stadium floodlights, where I talked about how our Board had signed off a rather large-sized chunk of additional expenditure on improving the entire system. Well, this has been fully specced, tendered and now ordered, so we will see work starting on the refurbishment of the existing lamps soon.

The rather harsh glare of the new bank of lights on the Barn Park End will be reduced when we will install a brand-new bank of upgraded, ‘capped’ lamp-holders as soon as our specialist installers gets them delivered from the supplier.

One other thing – the TV gantry. We have been looking at moving this for some time now and have decided – in consultation with scores of other people and organisations, including the EFL, the national broadcasters and our local teams – that the best place for its new home will be on the opposite side of the ground, at the back of the Lyndhurst Road stand.

We are still completing the detailed design for this, but one of the over-riding factors that we set from the start is that we must look after our loyal fans in that location and disturb as few of you as possible, if any at all.

There is a higher cost to the option we’ve gone with than the alternatives, which would have seen around 112 seats ‘killed’ in that area, but our Board of Directors have been adamant that our fans there are our priority, and that any extra cost that it takes to preserve the season-ticket holders’ seats in that location is well worth the spend.

Again, as soon as there is a final, signed-off plan, I will share it.

In the meantime, though, just to complicate matters, the demolition experts have told us in the last couple of days that, given the condition that they have found the grandstand to be in now they are pulling it apart, we will not be able to keep the old TV gantry going as long as we had planned to.

That is all for this week – I will come back to you soon.