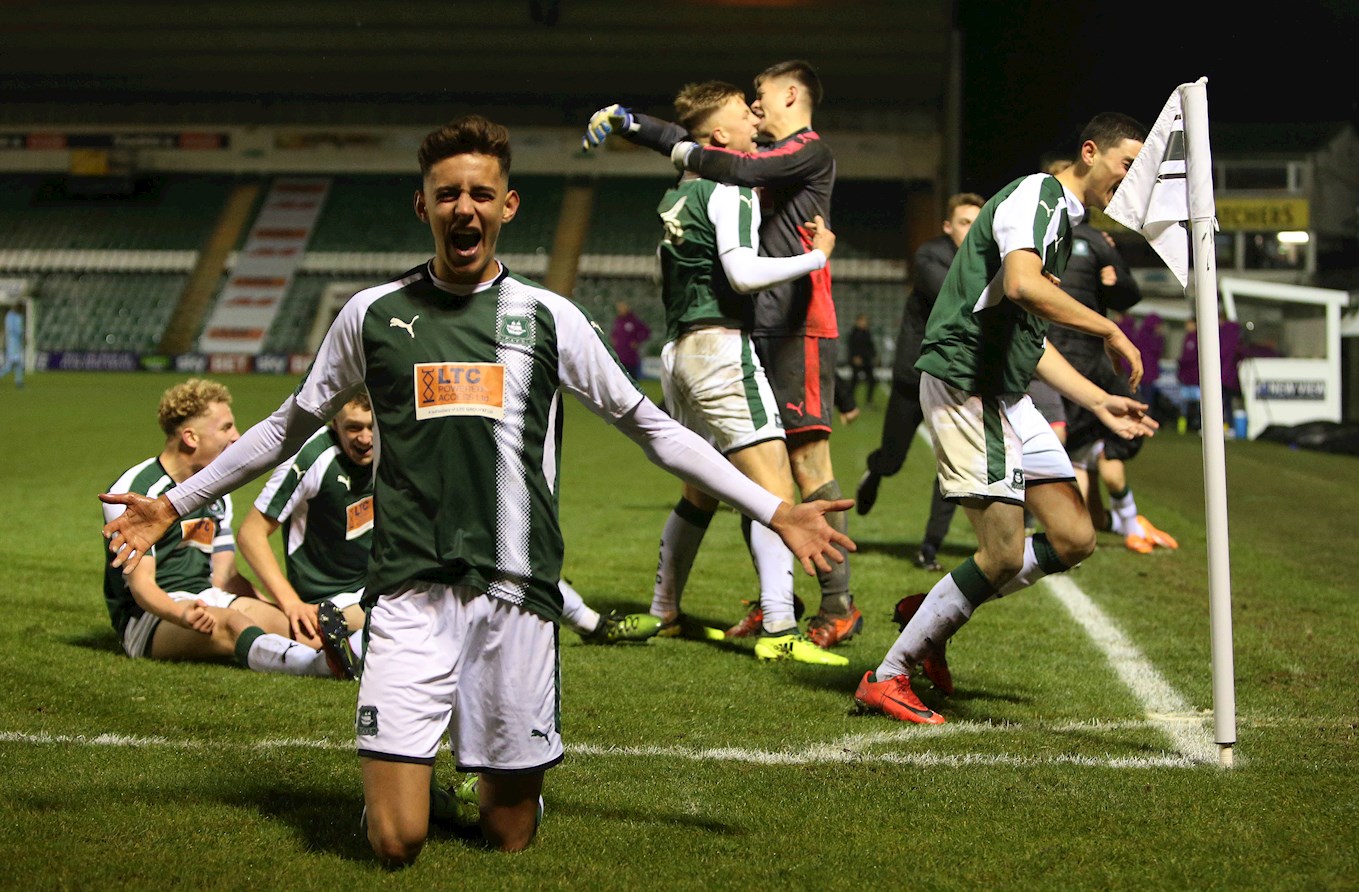 Michael Peck had the glory of converting the final spot kick after Michael Cooper had brilliantly saved from Ian Carlo Poveda-Ocampo, but there were many, many heroes in Green on this night.

At half-time, Manchester City – the under-18 side of the runaway Premier League leaders, an Academy that has produced a side that has reached the final of the FA Youth Cup for the past three seasons – had to make a substitution and change their shape.

That tells you all you need to know about how good Argyle were in the first half. Of course, City were on top, dominating possession by a vast margin. But how often did they get anywhere of note?

Early on, Nabil Touaiz missed his kick when in a good position. Argyle keeper Michael Cooper had to be alert to push round a cross from the same player, and later Benjamin Garre, on City’s left wing stroked a cross along the six-yard line that was begging to be put home. Other than that, City lacked ideas.

This was hugely to Argyle’s credit. A game plan was clear. When Argyle did not have the ball (which was often) Forward Klaidi Lolos would sit on Iker Pozo La Rosa, City’s deepest lying midfielder, preventing the short ball from the back. In turn, Rio Garside and Michael Peck occupied two Blue midfielders, leaving Cameron Sangster spare to either double up defensively, or be spare to start an attack.

It worked perfectly. There were shades of the Pilgrims’ senior side’s performance at Anfield about it, in the Emirates FA Cup at the start of this calendar year. Maybe Derek Adams had had just a wee input.

Whatever the case, credit has to go to Kevins Hodges and Nancekivell. This stage of their young charges careers is about their development, and learning how to work hard, play to shape and show huge discipline and commitment will serve them well, if they take in what they are being taught.

Before putting a bow on the first half performance, it should be noted that a marvellous Ryan Law burst down the left ended in a cut-back being cut out, but being played out only as far as Garside, whose shot was blocked. It was as good a chance as anything Argyle’s loftier rivals produced in the opening 45 minutes.

Indeed, Argyle frequently sought to play the ball from the back, rather than lump it clear and wait for the next onslaught.

At the interval, City took off left-back Tyreke Wilson and brought on Ian Carlo Poveda-Ocampo. This signalled a change in shape, with City playing three central defenders, two sitting midfielders, and four more advanced midfielders playing in support of a lone striker. A pretty complicated switch to have to try to best little old Plymouth.

With the change shape came more danger for Argyle. With two players available to take the ball from the centre-backs, City instantly looked more threatening, won a bunch of corners, and stepped up their play. Surely a goal was inevitable.

Or not. Argyle seemed to see out an initial spurt, then make some attacks of their own. Jephcott’s lung-bursting run down the left showed tremendous pace, strength and control. A run that began in the Argyle half ended on the goal-line at the other end; a 60+ yard burst stopped only by a blatant foul.

From the free-kick, which resembled a hockey penalty corner, Sangster’s cute chip found Elliott Crawford, steaming in with a strong header. It took an athletic clearance on the line by substitute Poveda-Ocampo to keep Argyle at bay.

With chances came confidence, but so too came gaps. The lightning fast Rabbi Matondo flew jet-propelled into Argyle territory with attempts to stop him – legally or otherwise – failing. Defenders were drawn and a chance looked on: cue Ryan Law to appear with a heart-stopping, shot-stopping tackle. Three team-mates were instantly upon him, with congratulations. A display of fine defending followed by pure camaraderie. This meant everything.

Felix Nmecha was introduced next by City, and soon hit a shot at goal with Cooper, naturally, and easily, saved. A minute later, Nmecha hit a notably more powerful effort above Cooper, but the latter instinctively raised a gloved hand and punched away in a terrific save.

Matondo raced around the outside and shot near post, where Cooper kicked away. Touaizi struck wide after terrific setup play by Pozo La Rosa, who shortly after shot low and found Cooper too good again. Smith’s shot was saved, too. Argyle were tiring, City’s flair was starting to create holes, but the Greens’ commitment, epitomised by Cooper’s shot-stopping, was doing enough.

Two minutes of stoppage time, then another whistle. Whatever would happen from this point, Argyle’s boys, becoming men, had drawn over 90 minutes with Manchester City.

No Etihad replay, though. No respite, either. The Argyle public address barely had time to play Last Christmas in full and we were back under way for extra time.

A crowded grandstand, and fans with tired eyes; yet players with fire in their hearts. City went close four times in the open quarter hour of extra action. Once a ball bouncing around in the area was flicked wide by Poveda-Ocampo, then Smith whistled one not too far wide.

Poveda-Ocampo was involved twice more, evading the tiring Tom Purrington, playing brilliantly though out of position, then toe-poking low and seeing Cooper in form once again. The same player, seemingly the freshest pair of legs on the field, then ghosted infield and fed Touaizi, but a clutch of Argyle defenders shielded the ball from the goal in front of the Devonport end.

A whistle, another change-around. City brought on Lorenzo Gonzalez while Argyle’s team and coaches huddled up. The near-2000 crowd roared encouragement. No-one, save for a couple of dozen folks with light blue hue, wanted Argyle to come this far and fail.

What am I saying, fail? Any result at this stage would see Argyle emerge heroically. As it happened, the second half of extra time elapsed almost without incident.

Matondo’s shot, deflected, was too close to comfort in the 17th minute of the second half of extra time. The sigh of relief as it missed was matched only by that of the referee’s whistle awarding Argyle a free-kick when Gonzalez apparently tried to handle the ball home.

Then, the noise was surpassed by a full-time whistle that indicated, per the laws of the game, kicks from the penalty mark.

Confident strikes abounded, but Jephcott’s penalty, well saved by Anderson, put Argyle at a disadvantage. That was until Nmecha’s pen went wide. Poveda-Ocampo, so impressive in the game,  could not get past Cooper who parried away.

That left Peck to plant home the winning penalty and give everyone in Green a stunning early Christmas present.