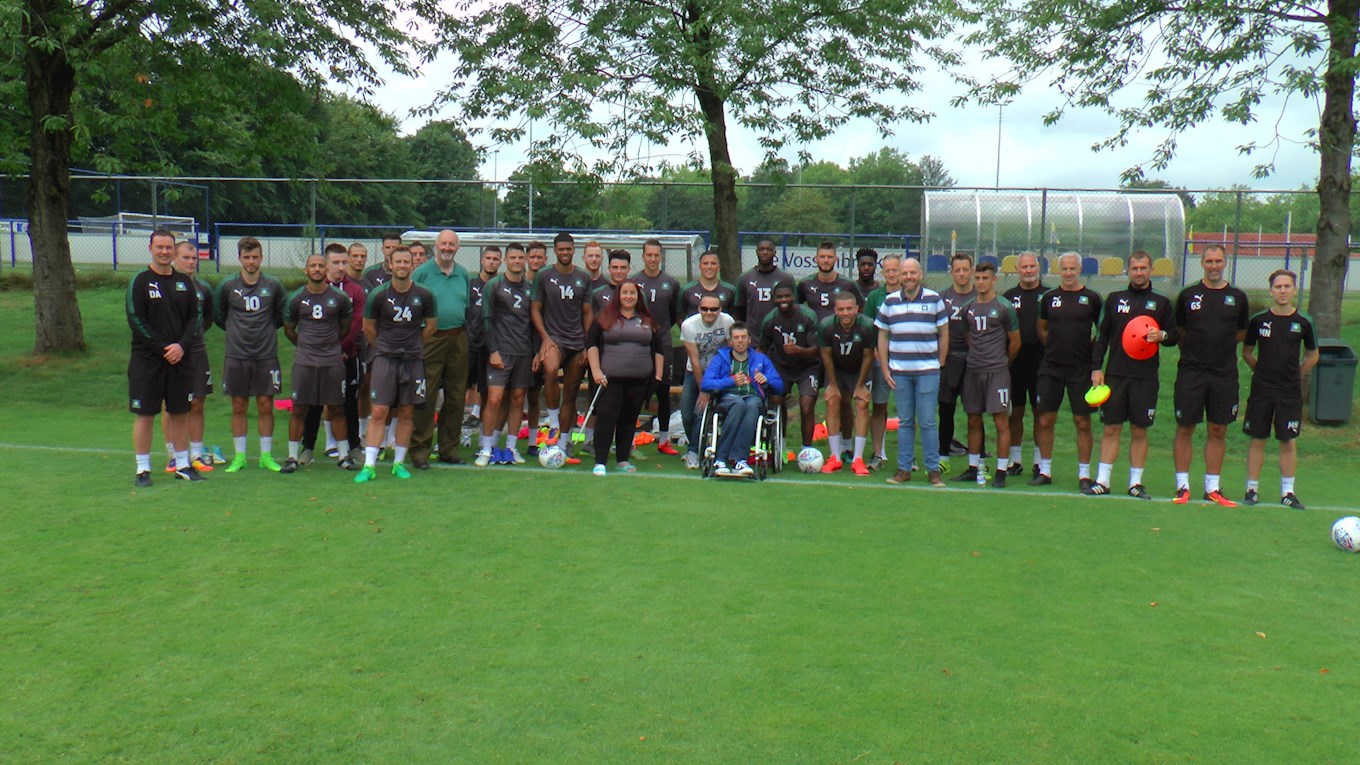 Delden Diary Day One: All Together Now

WE sent pafc.co.uk's Rob McNichol to Delden with the Argyle squad on their pre-season tour of the Netherlands. In his Day One diary, he would like us to be happy, together, as one. Except for mayors.

EVERYWHERE one looks, one sees familiar faces, and not so familiar ones.

By the week’s close, the latter will be immersed by the former, and we shall all be the better for it.

The build-up to Argyle coming to Delden - a small town in the east of the Netherlands - has been beset by hindrances, to the point where club Head of Operations Jon Back is considering changing his Christian name by deed poll to Set.

When the guest-list is drawn up for Plymouth’s 2020 Mayflower celebrations, the top table of dignitaries is unlikely to feature Eric van Oosterhout, the Mayor of the town of Emmen. After a period of Emmen and ahh-ing, old Eric decided that he did not want the entire population of Devon, most of Cornwall, and a few other sympathisers rocking up in his town, so he nixed our proposed game. Spoilsport.

Not to be left out, the Mayor of Hengelo, where Argyle were scheduled to meet FC Twente’s development side, also ran scared of the supposed Janner hoards.

It hardly amounts to a ‘nightmare’, though, as you may be told in some circles. For the club, it is not actually the worst thing in the world. Playing the games, although beneficial, is not the primary reason for being here.

More on that in a moment. In fairness, the people the hardest done by because of the having-a-mare Mayors are honest, dedicated Argyle fans merely excited at the prospect of watching their team aboard, perhaps using the two games to work a holiday around.

I did that once, before I worked for the club. That said, the two games I went to were at Charlton and Preston. Had one got called off, I could still stay in the Travelodge I had booked and then visited a local beauty spot in my trusty Vauxhall Astra I drove at the time. It is not quite the same if you have booked flights, hotels and more in another country.

Time will have been taken off work, too, looking forward to a game, all for nothing. Thanks, Mayors.

For Argyle’s part, the club are trying to get one or more games rearranged, or added in, and work on that continues as I write. The extra work-out before the season begins would be worthwhile.

What is easily more worthwhile, though, is the week that Argyle’s players are spending together. The complex in which we are housed contains not only some wonderful playing surfaces on which to play football, but facilities for tennis, table tennis, darts, ten-pin bowling, golf and more.

Training is going to be – and has already been – tough but during the times in between, to stave off the boredom, the lads are gathering to take on one another at various disciplines. It has been a regular sight to walk past the dartboards to see many players around it, playing killer. David Fox is claiming superiority on the ping-pong tables but Yann Songo’o’s time spent their will surely stand him in good stead for a rematch, while Graham Carey’s competitive nature will probably see him thave his day, too.

Now, all these leisure pursuits were available last year but little used in the early days of the tour. It was without doubt a quieter group 12 months ago, a group not yet accustomed to one another, with only a handful of players from the previous campaign being carried over and some naturally reticent characters joining the crew.

To last year’s nucleus, we have added the likes of Lionel Ainsworth, Joel Grant, Gregg Wylde, Ruben Lameiras and others; violets of the shrinking variety, they are not.

In fact, credit to Joel in particular, who has spent a great deal of time speaking with some of our fans joining us this year on tour. We will talk about these dedicated Green Army members a little more later in the week, but we are delighted to have them all with us. And it was not only Joel who spent plenty of time mingling, which was great to see.

You see, it is not just the players that must bond in order for a season to be successful. Over the past several seasons, it feels like the Green Army and the Argyle squad have become closer, which, in itself, helps performance. The scenes at Grimsby, and in Plymouth when Argyle were promoted against Newport, will remain special to me forever.

Here in Delden, our guests were personally invited by Derek Adams to stay all day, including for lunch with the players, and to both training sessions. There, they saw a morning filled with short passing drills, followed passing-based contests between four teams finishing into varying sized goals. Then, on drier pitches post-lunch, came a session replete with pattern-of-play movements, simulating how games may pan out during the season.