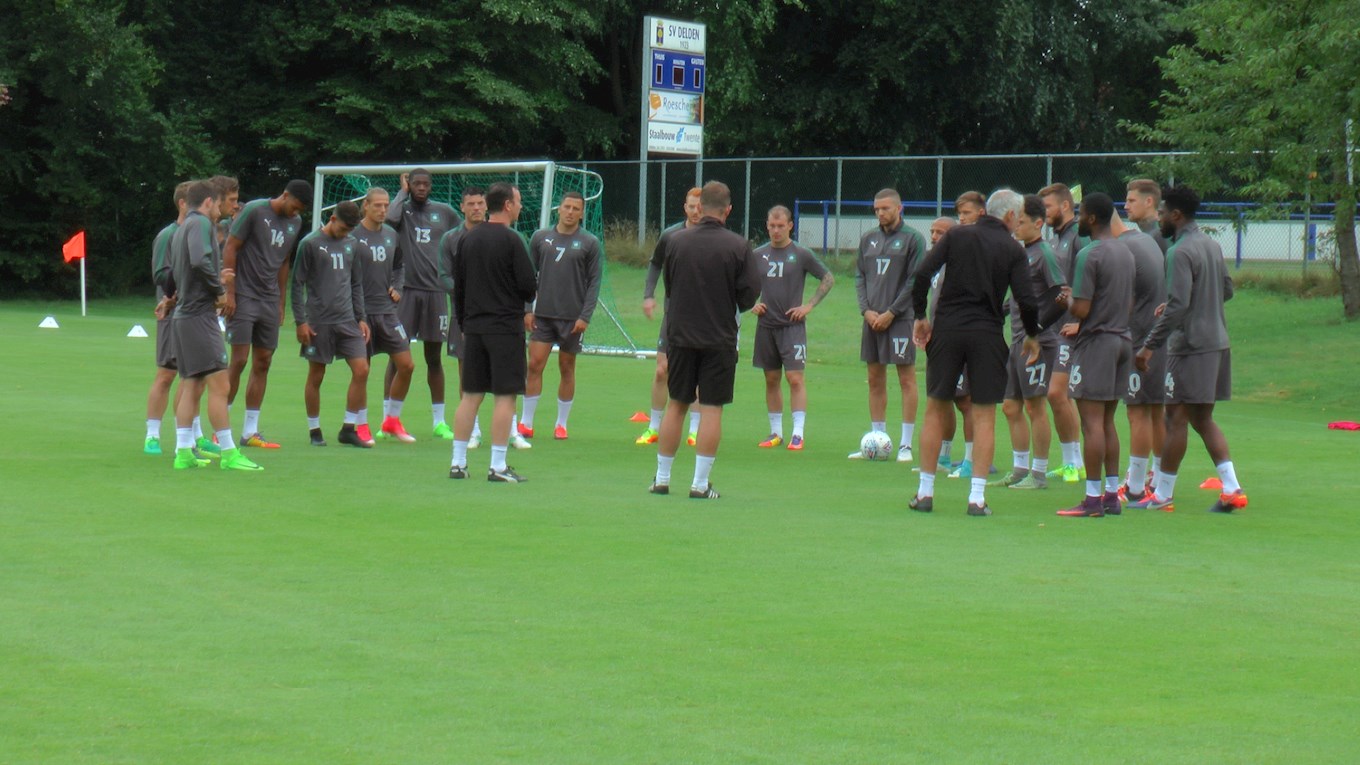 AFTER the second full day in Delden, our man Rob McNichol has a challenge for you...

IT will not come as a shock when I tell you one of the words that springs to mind when describing the Argyle squad is ‘competitive’.

Professional sportsmen tend to be ridiculously competitive all round, but this is not necessarily confined to their own sphere of expertise. One expects them to be competitive on the football field on a match day, and also on the training field during the week. What is not always so apparent is that the trait tends to flow through most of them 24/7.

Before coming to work for Argyle, I spent the best part of 15 years playing in, coaching in, refereeing and watching local football. I saw plenty of people during that time that easily had the ability to make a career as a professional footballer, for Argyle or otherwise. Some just did not get the breaks; most, though, made the wrong choices.

They decided to have that extra pint on a Friday night; they had that extra take-away during the week; they skipped training to watch the last two episodes in that box set. And now they are the best player every week in front of 80 people watching in a local park.

Ability is a large portion of getting to be professional footballer, but it is not everything. You need that extra drive, dedication and willingness to sacrifice.

Here in Delden, even away from the pristine grass of the training parks, you can find examples of it everywhere.

Let us step back a little. Some people will go by the adage ‘show me a good loser and I will show you a loser’. I agree with that to a point. I concur with the assertion that someone who smiles and laughs off defeat in an important contest will usually not rise to the top. However, there is plenty to be said for standing up straight after a victory, holding it together, reaching out and shaking the hand of the victor. That does not make you a ‘good loser’, just an honourable sportsman.

I think the appropriate halfway house is to take the honourable route as, but then to reflect as appropriate, and be annoyed about your defeat to the point of wanting to do something about it.

By my nature, I am a competitor. I have that edge that the very best need to reach the top. The trouble is I have precious little ability, so I have no chance.

Actually, I may be doing myself a disservice. I am annoyingly passable at many sports. I say ‘annoyingly’ because I would rather be garbage at nearly everything but amazing at one. Instead, I’m a six or seven out of ten at loads of things, which does not suit me, really.

I can tell you, writing this late on Tuesday night, that my Sunday evening defeat to our Football Analyst Matt Neil at head tennis is still rankling with me. Mainly because I was two sets up and made the stupid agreement to play best of five, then lost 3-2. And I had match point in the fifth.

Close to my defeat by M.Neil I lost a single set 10-0 to one D.Adams, but then that is surely to be expected, given the gulf in class between us. The Gaffer, though, was letting off steam. He lost three separate sets to our Chief Scout Greg Strong, and seethed after each. It gets mentioned at meal-times, it gets alluded to as an aside when setting up training drills. Derek will have his revenge, on this tour or the next.

I was looking forward to Adams/Strong parts four and onwards on Tuesday, but Greg got waylaid, so I got challenged. In fairness, I am delighted with my three sets worth of effort, losing 10-5, 10-4 and 10-8 (I even led 7-3 at one stage). I am quite proud of pushing the gaffer that far. However, I am not too naive to realise that, although I would not say he was letting me win, his focus was not quite as much engaged when playing a media bloke rather than a fellow ex-pro. That said, when it looked like a shock was on, the competitiveness came out, and he suddenly wiped the floor with me.

A short time later, I glanced to the head tennis court, where Jordan Bentley was about to take on the aforementioned Matt Neil, and beat him soundly. In a winner-stays-on environment Bentley won, then dispatched Alex Fletcher in a close contest. “Rob?” was the enquiry. I stepped up, and a shock looked on, but he beat me 10-8. Again, I had been taken for granted, but the pro pulled out the victory. After Jordan took his winning streak to five – “Stop giving him easy headers, lads” – I took my second chance. I was annihilated, 10-1. I am giving Jordan 15 years and about seven stone of an advantage, but that is not the point. He would not be beaten, then had to prove a point.

Then came the next challenger.

Jordan, as an accomplished young pro, has a bright future ahead of him. He does not, though, have what the gaffer has. Jordan – younger, nimbler, quicker – seemed to dominate the game. When the crunch came, it was an Adams victory, 11-9. Next on court: Adams and Fletcher v Oscar Threlkeld and Jakub Sokolik, and a 2-1 sets victory for Derek and Alex.

After every point missed, every mis-kick, every bad decision, came a reaction. Sometimes an expletive (mainly me, not the manager), often a self-criticism, always a sign of wanting to do better, wanting to win.

Our visiting fans here in Delden were taken by small examples of what might be misconstrued as ‘strops’ during the training sessions they have witnessed, where a player moaned about a decision or a team-mates pass, or similar. As was noted, though, in every case the ‘moanee’ is actually annoyed with themselves. They failed their own standards, and lashed out. In every case, no lasting damage was done.

All around the complex tonight, lay competition. I saw lads playing poker, darts, bowling, head tennis, table tennis, actual tennis. Everywhere I saw competition, I saw smiles. It was the right kind of competitiveness, spurring each other on, but with an appropriate amount of mickey taking. As it should be.

Best of all, I saw new recruits intermingling, playing with and challenging established players. The number one reason for our being here is to leave the Netherlands as more of a unit than we came here.

Then, and only then, can we be truly competitive in Sky Bet League One.