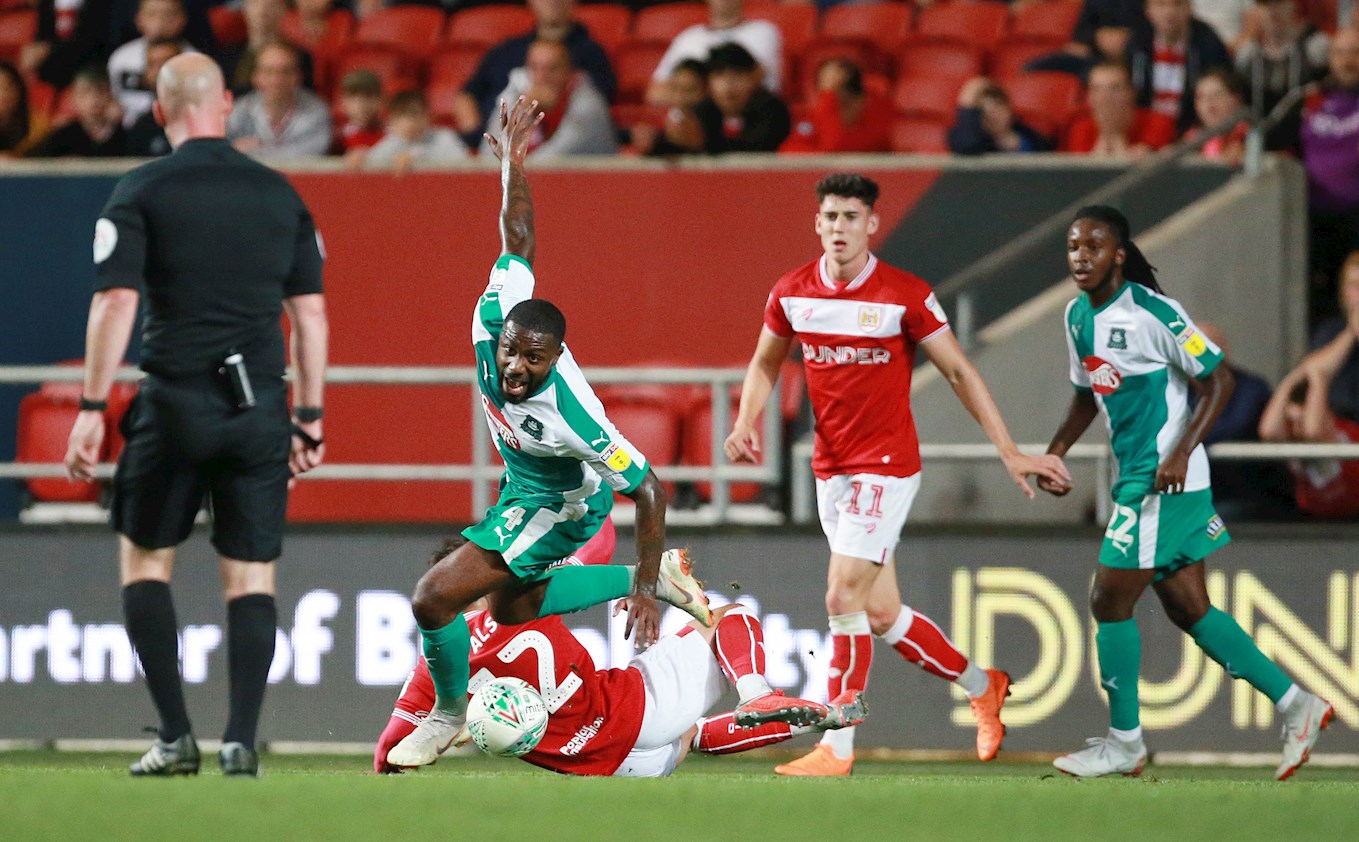 DEREK Adams was as surprised as anyone to see Yann Songo’o head Argyle into the second round of the Carabao Cup.

The Cameroon defensive midfielder found himself in the right place at the right time against Championship side Bristol City to convert Graham Carey’s 28th-minute cross into the six-yard box and earn a 1-0 win over last season’s cup semi-finalists.

Derek said: “He doesn’t score enough goals with his head, but I’m glad he did that tonight. I never give him licence to pop up in the box unless it’s at a corner-kick, etcetera. It just happened, and I’m glad it did.”

Yann’s goal was the high note of an impressive all-round performance on his first start of the season in which he patrolled the midfield in front of a back four that is yet to concede from open play this season.

“You need players like that in your team,” Derek said. “I had him when I was at Ross County – I took him on loan from Blackburn – and he’s a terrific signjng for me because he does a job that other players don’t like to do, but you need them in your team.

“His use of the ball was very good. He got booked after a minute – he was harshly booked, in my view – and he had to play the rest of the game under that caution.”

Yann was one of four players promoted from the bench following Saturday’s 1-1 Sky Bet League One home draw with Southend United, and all contributed to a fine team performance.

Derek said: “I changed the team because I felt we could have the running power of [Freddie] Ladapo; we could have the strength of Songo’o; Joel Grant deserved an opportunity to get on the run; and [Niall] Canavan came in and made his debut, as well.

“We had outstanding players. [Jamie] Ness, captain, was terrific; Ladapo, up front, was absolutely outstanding, his hold-up play – the two centre-halves did not know what to do with him; defensively, the back four defended well – the goalkeeper did not really have much to do, save-wise; he pulled  a lot out of the air.

“Songo’o, great on the ball; Conor Grant and Ness in front, and Joel Grant and Graham Carey gave us options in the wide areas.

“I’ve known Carey for many years; I’ve signed him twice and I know him inside out. He is an exceptional talent but, when he has to work off the ball, he’s even better.

“We had seven players on the bench who have all played in the first team and who have got good experience so we have got competition for places and that’s what you want.”