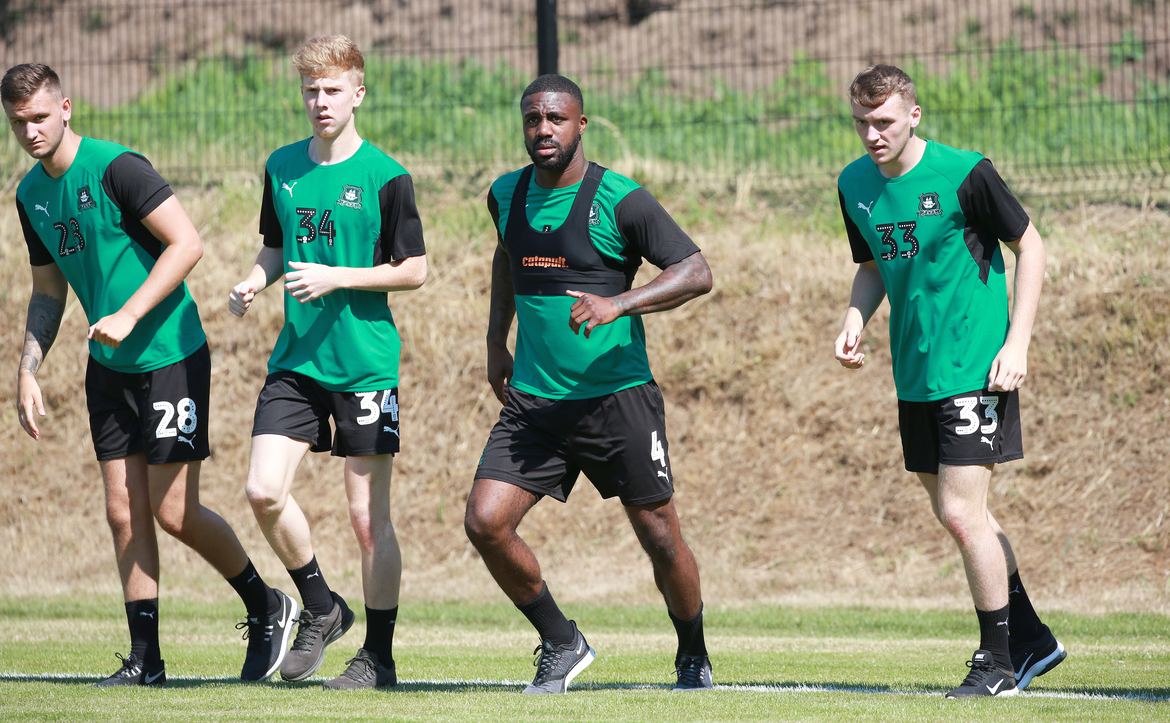 ACCOMPANIED by an image gallery of the second day of pre-season training, Rob McNichol muses on the season's regular beginnings...

IT begins in the Green Taverners Suite this year. The first gathering: intense, and in tents.

Normally, the home dressing room or the players' lounge might be the first location for the squad of the season to gather en masse for the first time. Now, because of Home Park development such locations are either out of bounds or increasingly isolated and threadbare.

To the tent, then, and arrival is oddly marked by the juxtaposition of ad hoc and the sophisticated. Many of the players arriving will as recently as last year have been doing so in the plush surroundings used by clubs like Everton, Manchester City and Arsenal. What must they think of us, in our makeshift canvas home, loaned from a fans group, indebted though we are to them?

Yet, when looking past such a thin veneer, the feeling of professionalism is as strong as in many a year. PUMA's training kit is as smart as their stunning pair of first-team kits this season, with kit men Neil and Sean having done a sterling job of readying it. Chef Chris and his team serve breakfast, while each player takes their turn posing in front of a green screen. This is not your novelty booth at a wedding, posing in Elton John specs while Waikiki Beach supplants your background.

"You just need to walk to that mark, look down the lens and pose," says Siobhan, in charge of the shoot. "It's for some videos we are making."

"Like Sky?" says more than one of the players.

The intention is for a social media reveal of squad number and sponsor, but the very comparison to the broadcasting giant is welcome.

Absent to this point is Derek Adams. Deeply familiar to some, about to become more so to others, whose interaction thus far has been in recruiting, perhaps only down a phone line, from one destination to another, the conversation bypassing Plymouth altogether.

Derek is everywhere in spirit, though. He has led the rise in professionalism and organisation at this club. Playing with the narrative, briefly, I can tell you that on day two, waiting for a media call, I saw a chocolate wrapper on the pitch - Double Decker, if you are interested - and immediately retrieved it. That may seem a little thing, but I will not lie and I can admit that a few years ago I may have let that blow away in the Home Park breeze rather than touch someone else's detritus. Now, instinct one is to remove it, as instinct two, close behind, is 'that pitch is going to be on telly later - what will people think if they see rubbish on it?' That's the Adams influence, because he would have picked that wrapper up without hesitation. It is an ethic he has learned from another Scottish manager. I think he is called Sir Alex somethingorother.

This is normally the cue for an 'I've seen enough rubbish on that pitch in my time...' quip, but even that wag's gag does not really work these days. Derek's squad building usually proves pretty useful, but for now these ten new Pilgrims are potential only. They are the only ten players in Argyle history to have never made a mistake.

At 9.30am on Thursday, though, they are wee boys again, on their first day at a new school. New uniform on, clutching to anything that breathes familiarity. Everton alumni Conor Grant and Calum Dyson are noticably inseperable, having the benefit of sharing a Goodison and Finch Farm history. Soon, Scott Wootton is nearby, possessing a softer tone of Merseyside accent - from Birkenhead, 50% of the ferry's destination - as geographical bonds are discovered, and clung on to.

In protracted groups, the new lads do their filming duties and head for those dressed in the same uniform, save for different numbers. Those already established as Pilgrims take it in their stride, sharing tales of the summer: golden sands, Dubaian selfies and missed putts. They do so while greeting old pals, trusted team-mates...yet cocking an eye at the new intake. The ones that have come simulataneously to join you in battle, become your new best pal - and nick your place.

Ah, it's all in the game. Everyone wants their place, but competition makes us all thrive, and any thoughts of getting picked on the teamsheet on August 4 will come a bit later. For now, we are all Argyle, and steadily some old bonds are discovered. Gregg knows Joe from Bolton; Tafari and Ash are already familiar to each other; Joel is counting the other Grants.

Almost imperceptably, Derek Adams has entered, to no fanfare, but sits with his staff, eats breakfast, and readies himself to become the gaffer once again.

Soon, we are at Manadon, on a brand new 4G surface, ready to start work in earnest. Actually, before that, we are in a dusty car-park doubling as a building site, as Manadon is yet to be completed. From here, a Harry Burgoyne goal-kick could take the wind and land on the superb new rubbercrumb surface, but a strike in the other direction would find the entrance to Plymouth Parkway's Bolitho Park, where fittingly the pre-season fixtures will start, nine days after this first training session.

It's a testing day, in more ways than one. It is likely the hottest day of the year to that point, not ideal for running about, or even for media department members who forget to wear sun lotion - red face to go with my glowing pink arms - like a fool.

The lads undertake sprint drills, agility runs, leaping tasks: all timed, all measured, all logged. This is analysed, and will be revisited to assess progress. Nothing is left to chance any more. No "Top of the hill and back twice, lads."

Finally, the dreaded Bleep test. A constant shuttle run, where you hit your mark to time. The more tired you get, so the pace you are asked for quickens. It is a punisher, but no-one is shirking. The players are split into two groups. As players begin to falter, so their resting team-mates roar them on. Results of such a task ought to stay in-house, but I will break rank just once to give a nod to Gary Sawyer. Talk about leading by example. Around 30 players take on the task, but only one or two best the skipper. Those that do are aged a lot nearer to 20 than 30, and are applauded heartily, and have their back slapped by those with much more seniority. One club.

And so the trudge back to base begins, fluids are replaced and stock is taken. Judging by the looks on players' faces, despite the 'oh no, not pre-season' rhetoric, they are glad to be back. Honestly.

The next time I see the players is the following day, at the now-stunning looking Harper's Park. We have invited some media to Home Park, so they will film and photograph parts of a training session,then be present at an open media session with the ten new signings and Derek.

Eye catching for some might be that, after a solid warm-up, there are some round white items to play with. In the dark old days, you needed to complete the distance from here to the tip of the Lizard and back before a chance to see anything with 'MITRE' printed on it, but philosophies change.

The players go into some basic drills, volleys on both feet, controlling and passing at speed. I note to one attendee how straightforward the drills are, that even top players look after the basics first, and that sometimes their sessions involve technique even we mortals could achieve. Then Derek makes them control a ball on their chest in such a way that they then head the ball back, and I sulk that I could never do that in a million years. They, of course, are virtually flawless.

And if they are good on the ball, they match up in the verbal stakes as well. We take our leave from the training session, then see the players a couple of hours later, as they are pressed by the press at Home Park's scorching pitchside.

The Herald are heavily represented, as are the BBC, with ITV and the Sunday Independent on hand too. When a journalist is free, we usher a different player towards them to ensure as many are as satisfied as is possible. BBC Radio Devon's Charlie Price comes equipped with quiz questions, but he is no Richard Osman, despite being tall with glasses. Some players deal better than others with his trivia posers, but his station in the away dugout soon becomes the focal point, as any players not paired up at the time are more than happy to see their team-mates squirm.

This is the biggest point of the week for us. Clearly, as Argyle employees - and more importantly, fans - we want to to see great training sessions, playings looking fit and well and in great spirits. But our remit is communications, and our best result comes when all players give good accounts of themselves to the assembled media members.

To our eyes, they do. Players, particularly those young and inexperienced, find this task a tricky one, but to my mind they all come through swimmingly. The aim is to be convivial and charming, and offer geniune insight without giving too much away. Thumbs up all round.

Harry Burgoyne strikes us as the most confident of the bunch, ready with a remark at all times. Perhaps, as a goalkeeper, swagger is needed a little bit more. Confidence does ooze out of him, which should be good news for any defenders playing in front of him this season.

Gradually, camera shutters lessen, tripods are taken down, and remarks of "I've got what I need, thanks." are muttered. All seem to depart happy, fromt either side.

These are early days. Right now 24 teams have an equal right to believe they can have a successful League One season, but we can only look after ourselves, and thus far it is hard to fault anything off the field. Players are in place, preparations are under way, and the atmosphere feels first-class.

But what we all crave - spectators, players and staff - is the smell of the grass, the sight of the goalposts and the shrill blast of a whistle. On Saturday, at Parkway, all that happens. And then, wouldn't you know it, it is only four weeks until we are off to Walsall, and it all begins again.

Football is back. Argyle are back.