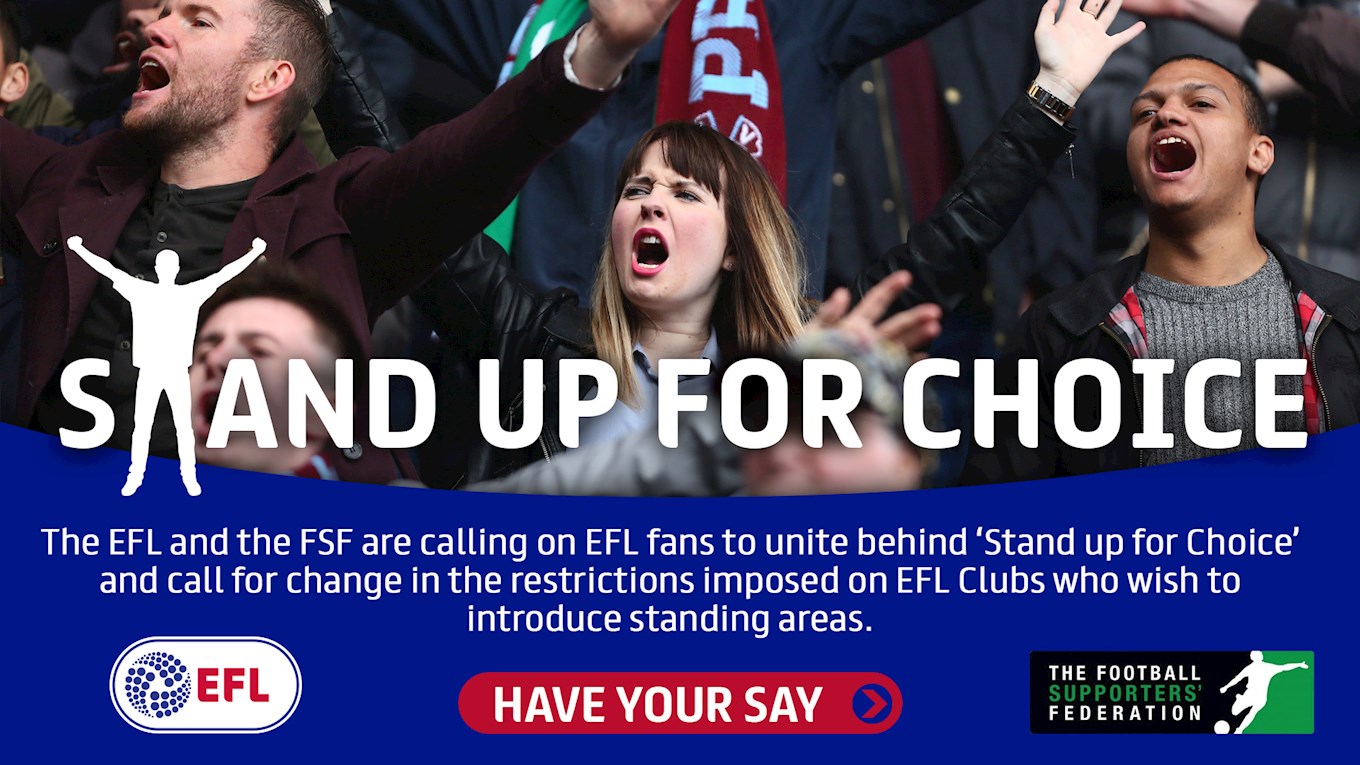 THE EFL has released a new video, entitled ‘Stand up for Choice’ to highlight the benefits that licensed standing areas can bring to EFL stadiums nationwide, ahead of MPs discussing the matter at the upcoming Westminster Hall debate on Monday.

In addition, EFL Chief Executive Shaun Harvey has outlined his view on how legislation should be amended to ensure EFL Clubs, across all three divisions, are able to give supporters the match-day experience they want, whether it is sitting or standing in stadiums.

Featured within Stand up for Choice are EFL Chief Executive Shaun Harvey, Peter Daykin, from the Football Supporters’ Federation, and senior club representatives, all extolling the virtues of choice and what having the option of being able to operate licensed standing areas has meant for their individual clubs.

The EFL is urging supporters of Stand up for Choice to share the video online ahead of the upcoming Westminster Hall debate, so that those involved in the debate can be as informed as possible and not let any misconceptions cloud their understanding. The video can be viewed here.

The matter has received widespread attention in recent weeks and months, with the views of football fans being made abundantly clear via a recent survey undertaken by the EFL in partnership with the Football Supporters’ Federation, whereby an overwhelming majority of supporters believe they should have the ability to choose whether to sit or stand.

Current legislation restricts the freedom of EFL clubs to offer this choice to supporters, with Championship clubs subject to all-seater requirements that were introduced more than 25 years ago.

However, amid a changing political climate with MPs set to debate the issue next week, EFL Chief Executive Shaun Harvey has outlined how he believes the matter should be resolved, with supporters being given the choice they desire in a manner that is safe and fully-licensed.

He said: “This is not a safety issue. Standing is safe and we currently have 22 EFL clubs across all three divisions offering full licensed standing accommodation to supporters.

“The matter being debated here is whether all clubs, regardless of the division they play in, should have the ability to offer fans the choice they want in terms of whether to sit or stand while they watch their football team play.

“While we understand the sensitivity around the issue, the debate is simple and we believe the evidence is clear in how making changes in approach to legislation could have a major impact, not only on the enjoyment of the many millions of supporters who already regularly attend EFL clubs, but also in attracting new supporters to the game, with evidence suggesting standing is popular amongst younger fans.

“This is a local issue, and we believe the legislation should be amended to provide individual clubs, and their local Safety Authority Groups to make the decision as to whether standing can be reintroduced to any given stadium and in what form. In our view, it is illogical and outdated to continue with the ‘one size fits all’ approach that has been in operation for the past 30 years.

“We are pleased that the Government has recently taken steps to review this, and we will continue to work with all the relevant stakeholders, and provide insight and guidance as appropriate, in order to see legislation amended in a way that benefits all parties for the good of the game.”

The ‘Stand up for Choice’ survey, which received more than 33,000 responses in less than two weeks, showed that 94% of football fans believe they should have the option to choose the type of match-day experience they want - whether that be seated or standing in safe, licensed areas of grounds.