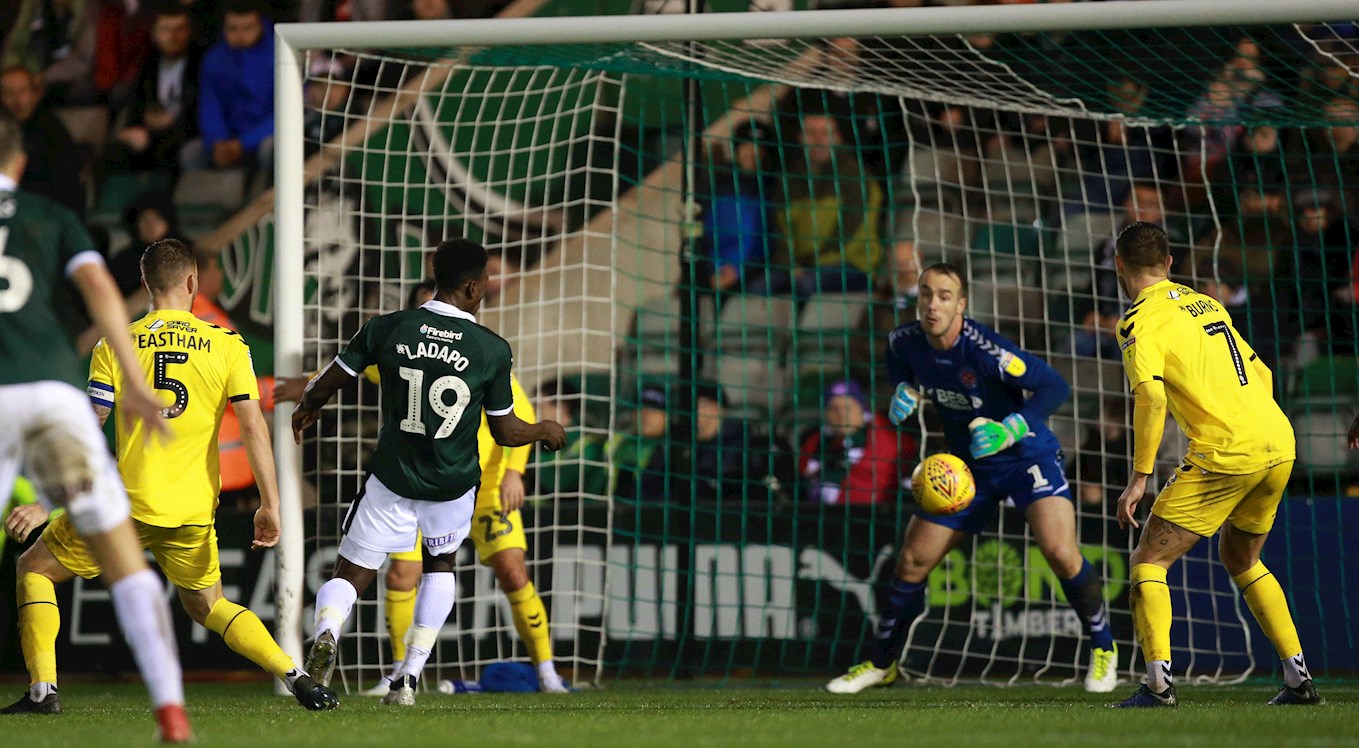 ARGYLE manager Derek Adams thought his Pilgrims were full value for their 2-1 Sky Bet League One victory over Fleetwood Town.

Two second-half goals from in-form forward Freddie Ladapo sent Argyle on their way to victory but a late Paddy Madden strike made for a nervy final ten minutes before the three points were confirmed.

Derek said: “Both sides, at the start of the game, were looking at each other and seeing who was going to make then first move. Fortunately for us, we did that.

“In the second half, we got a goal, and a well taken one at that, from Freddie, and went on to get a second goal, which gave us breathing space.

“We could have got a couple more – we hit the post twice with header and a shot – but, over the 90 minutes, a thoroughly deserved victory for us because we contained Fleetwood to diagonal balls, which they were very good at, trying to get a knock-down. We dealt well with them in wide areas, which is a threat; and also dealt well with them when the ball was going into the hole.

“They are all things that Fleetwood are very good at so, tactically, we did well to stop the threat and then, offensively, we got at them down the sides or directly through their centre-halves.

Although it seemed that the second-half momentum was with Argyle before Freddie struck twice in ten minutes, Derek was wary of Fleetwood’s threat.

“In football, you can never tell. It went a wee bit to and fro at times and you always felt that they were capable of scoring.

“They have got some exciting players in their side who are capable of doing that – with Madden and [Ched] Evans up front, they are a potent strike force, and they had the wide players in [Ross] Wallace and [Ashley] Hunter, who have always created chances this season.

“We dealt well with that threat because we picked up the second ball; we played forward; we got the ball into Freddie in the second half and deserved to get the lead.

“We felt that the players had the game by the scruff of the neck, but we had to get that goal to have the confidence to go on.”

Derek was pleased with contributions from all parts. He said: “We’ve got Freddie, who gives us that outlet; in the midfield, they were very good – [David] Fox, [Jamie] Ness and [Antoni] Sarcevic got about the two in the middle of the park; the way that we found forward passes, as well – Joel Grant always gives us an outlet going forward, but defensively does very well; and Ruben [Lameiras] came off the side and had some good bits play, as well.”

Ness and Sarcevic had been injury doubts before the match but showed no signs of any problems as they bossed the midfield.

Derek said: “They can get about the football pitch very well and when they are on it, they are up there with the best midfielders in the league.”