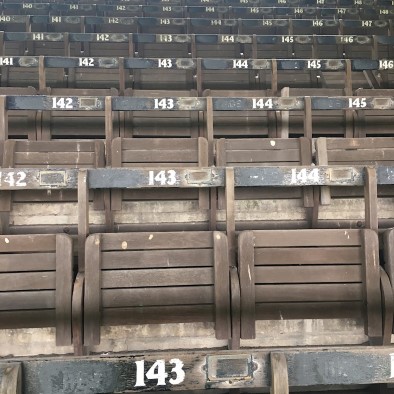 SATURDAY sees our fourth Sky Bet League One match since the closure of the grandstand, with Blackpool visiting an ever-changing Theatre of Greens.

Supporters attending the first three games will have noticed plenty of changes to the match-day experience at Home Park, and these will continue as the redevelopment gathers pace.

The biggest building project at Home Park since the construction of the original grandstand nearly 70 years ago is providing a huge learning-curve for all - Argyle staff, supporters, even the manager and the players - as circumstances change and challenges are met.

This Saturday, for instance, is the last time that the large vehicle access gate on the corner of the Devonport end and Lyndhurst Road side will be able to be used by spectators.

The club has other plans for that access route, which was built to accommodate emergency vehicles on match-days and never intended to be used by spectators.

Although, in the past, supporters have been allowed to leave the ground by this gate, that will necessarily stop following Saturday's match.

The club can assure supporters that, while this change might be an inconvenience, it has no effect on their safety - in the case of an emergency, if people leave by their nearest exit, everyone will be able to get out in the required time.

The area around the gate is one where new building work has started, with a section of the walkway around the ground fenced off, and spectators should bear this in mind when attending Saturday's match.

Another area which has proved a challenge is the new floodlighting at the Barn Park end. Supporters at the Devonport end of ground opposite the lights have contacted the club to say that they find them too dazzling.

Consequently, the club brought in experts to view and test the lights during the recent Premier League Cup victory over Portsmouth, and some adjustments were made. The situation will continue to be monitored and spectators are encouraged to feed back their thoughts into the club.

The club appreciates the patience and understanding of the Green Army as everyone adapts and gets used to new arrangements.