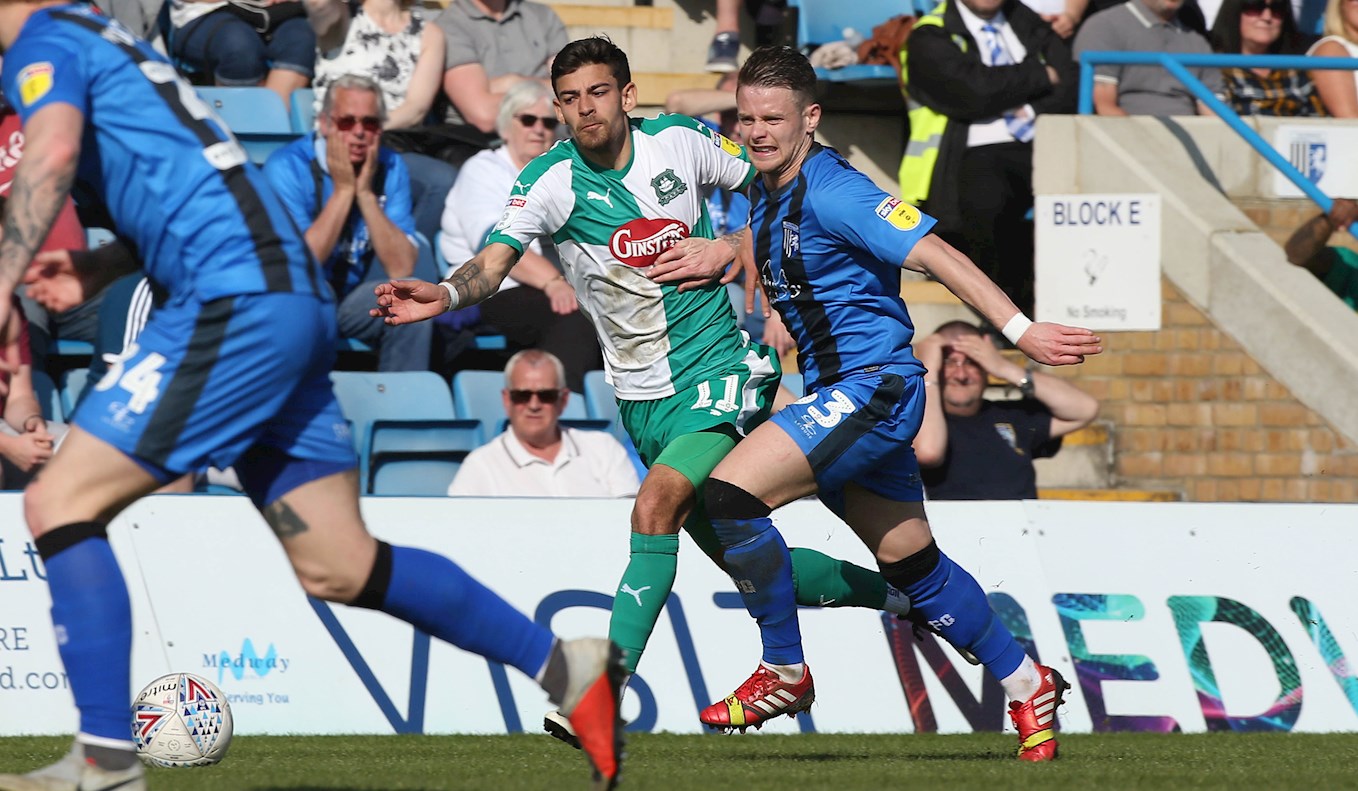 IT seems like months now that Argyle have been seeking the win that would see the points tally for the season reach the magical 50 that is generally felt to be the guarantee of playing in Sky Bet League One again next season.

The failure either to convert leads into victories or dominance into goals has meant that chances to cross the safety threshold have come and gone, which has made the recent past tense.

The past tense, as you will recall from your schooldays, comes in many forms.

Of course, all of this means that every successive match-day makes the present tense, too.

There was a palpably nervous air all around the Priestfield Stadium before kick-off, with Gillingham and Argyle fans acutely aware that whichever team picked up the three points would be pretty much on easy street for the last three matches of the season. The losers, on the other hand, would be reminded that there is a third tense – the future.

The early exchanges showed that it was not only the supporters who were feeling it, with first-touch nerves in evidence all over the pitch. You know that there is a lot at stake when David Fox, the epitome of calmness, punches the air to celebrate winning a throw-in.

If Foxy is getting antsy (to mix animal metaphors), then where can we turn to for reassurance?

As so often before, the answer is Graham Carey.

As Gillingham tried for once to play the ball to feet, having previously relied on punting everything in the vague direction of Tom Eaves’ head (and succeeding only in finding those of Ryan Edwards and Lloyd Jones), Carey anticipated Mark Byrne’s intentions and dispossessed him with a crunching tackle which put Freddie Ladapo away. Freddie had much to do, but not for nothing has he scored 16 league goals this season. The only thought on his mind was to shoot, the only questions being a) at which particular moment and b) with which foot. The answers were, respectively, the right one and the left one.

This was the nerve-settler that everyone in green craved. While taking the lead is no guarantee (if it were, we’d be safe long since), everyone would always rather be a goal up.

If the 836-strong Green Army were breathing a little easier, the home fans were not.

Having been extremely vocal in their support early on, they were quick to turn against their team as soon as Argyle scored. Groans took the place of cheers, and the half-time whistle was greeted with resounding boos.

The as-it-stands table at that point put Argyle in 14th place, on 50 points, and with Gillingham having barely threatened at all, things were looking up. Tense? Pah!

The fact that Gillingham boss Steve Lovell made two substitutions at the interval (including the anonymous Eaves) suggested that he was in tune with the general mood around the ground.

If Argyle fans were feeling a little less tense as the second half kicked off, that happy state lasted no more than 30 seconds.

A long ball forward, a slight hesitation between Smith-Brown and Letheren, a huge three-way coming-together with Tahvon Campbell, and the apparently jinxed Letheren coming off worst, although thankfully he was able to resume after lengthy treatment.

What Argyle really needed was a second goal, and it was starting to look like only a matter of time before it would arrive.

Firstly, Ladapo set off on one of those runs that puts you in mind of Faustino Asprilla, all rubber legs and unpredictability. Despite looking odds-on to lose the ball at least six times in the course of a 40-yard dribble, he managed to retain possession and fire in a shot that had Gills’ keeper Thomas Holy offering up thanks that it passed the wrong side of the post.

Then Edwards, up from the back for a corner, carved out a clear chance with a backheel and swivel that were as unexpected as they were deft, but his curled effort drifted just over Holy’s bar.

With things going so much Argyle’s way, Regan Charles-Cooke’s equaliser was a bolt from the blue.

The second goal, two minutes later, an unmarked header from eight yards by the miniscule Mark Byrne, was beyond belief.

They say that goals change games, and this one was suddenly transformed beyond recognition.

The tension that had been pouring down from three sides of the ground was suddenly transported to the fourth, where the Argyle fans were reliving Bristol Rovers and Blackpool all over again and pondering just how hard it can be to pick up those elusive three points.

The minimum return should still have been one point, but a clear chance spurned by Antoni Sarcevic at one end and a loose Niall Canavan pass picked off at the other produced a scoreline that barely told the story of the 90 minutes.

Yes, the past and present have been tense, but what if we beat Barnsley on Monday?