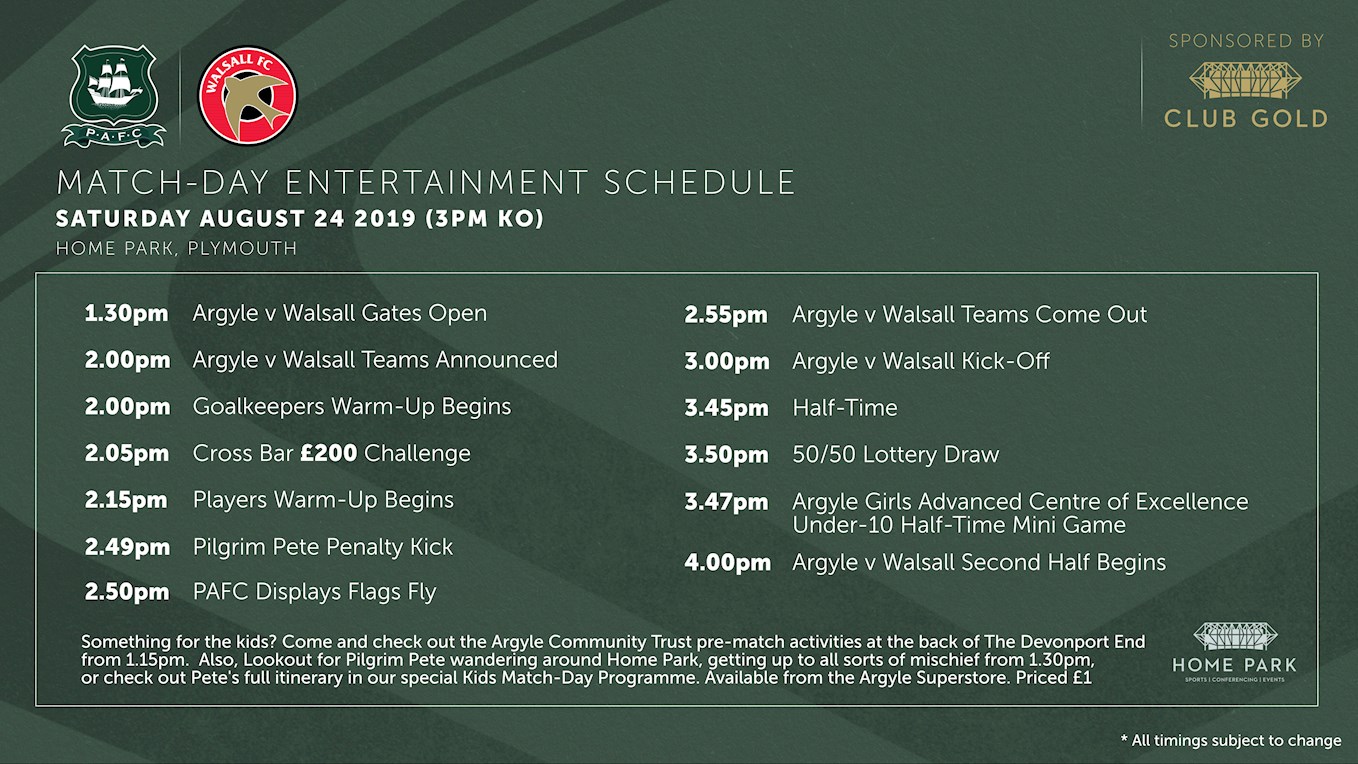 THE ground will be open from 1.30pm. For the Green army, Turnstile 15 on the Lyndhurst Road side will stay open until 3.30pm and Turnstile 6, at the Devonport end, will remain open until five minutes after the second half kicks off.

RECEPTION at Home Park is in the Ticket Office and will be open from 9am on match-day. The Home Park Superstore, where you able to purchase all three of this season’s kits and our match-day mania special offer of a half-price Argyle Baseball Cap, is also open from 9am.

THE official Pilgrim Match-Day programme freshly re-designed for 2019-20 will be on sale from the Argyle Superstore and around the ground for the price of £3. There is also our new for 2019-20 season special children’s programme, which costs just £1.

BEFORE the game, we will be holding the fourth instalment of a regular Crossbar Challenge, with someone selected from the crowd at this time at every home game to step on to the pitch and attempt to kick the ball onto the crossbar. A £200 prize awaits a successful challenger. In the event that the crossbar is not hit, the £200 rolls over to the prize fund for the next home game, making the pot £250. The prize fund will roll over by £50 week on week, until somebody is able to strike the crossbar.

WE only select from seats that are clearly occupied at 1.55pm – so to be in with a chance of playing the Crossbar Challenge, supporters need to be seated before then.

THE Match Sponsor is Ginsters, the match-ball sponsor is the 50/50 society and the Match-Programme Sponsor is Thatchers Cider.

THERE will be a 50-50 Lottery half-time prize draw, with tickets available from the usual sellers. Former Pilgrim Paul Gibbs will make the draw.

ALSO at half-time, Plymouth Argyle FC Girls Advanced Centre of Excellence Under-10s are taking part in a small-sided game organized by the Argyle Community Trust. It is the club’s intention to roll this out into a full package which includes match tickets, a stadium tour, lunch, shop discount, discounted Community Trust roadshow courses and a signed football from the first-team squad. We are trialling this initiative throughout August. Keep an eye on your official website over the coming weeks to see how you can get involved.

WE are asking supporters – especially those who come to Home Park early on match-days to experience our new pre-game entertainment – not to stand in the walkways between the front row of seats and the pitch-perimeter boards. Access to seating in many areas of the ground has become something of an increasing problem, especially for our disabled supporters, so it is essential to keep those walkways clear. Stewards have been asked by the club to keep these areas clear and will, if absolutely necessary, take action to ensure all supporters are able to walk around the stadium safely, and enjoy the on-pitch activity without having their view impeded.