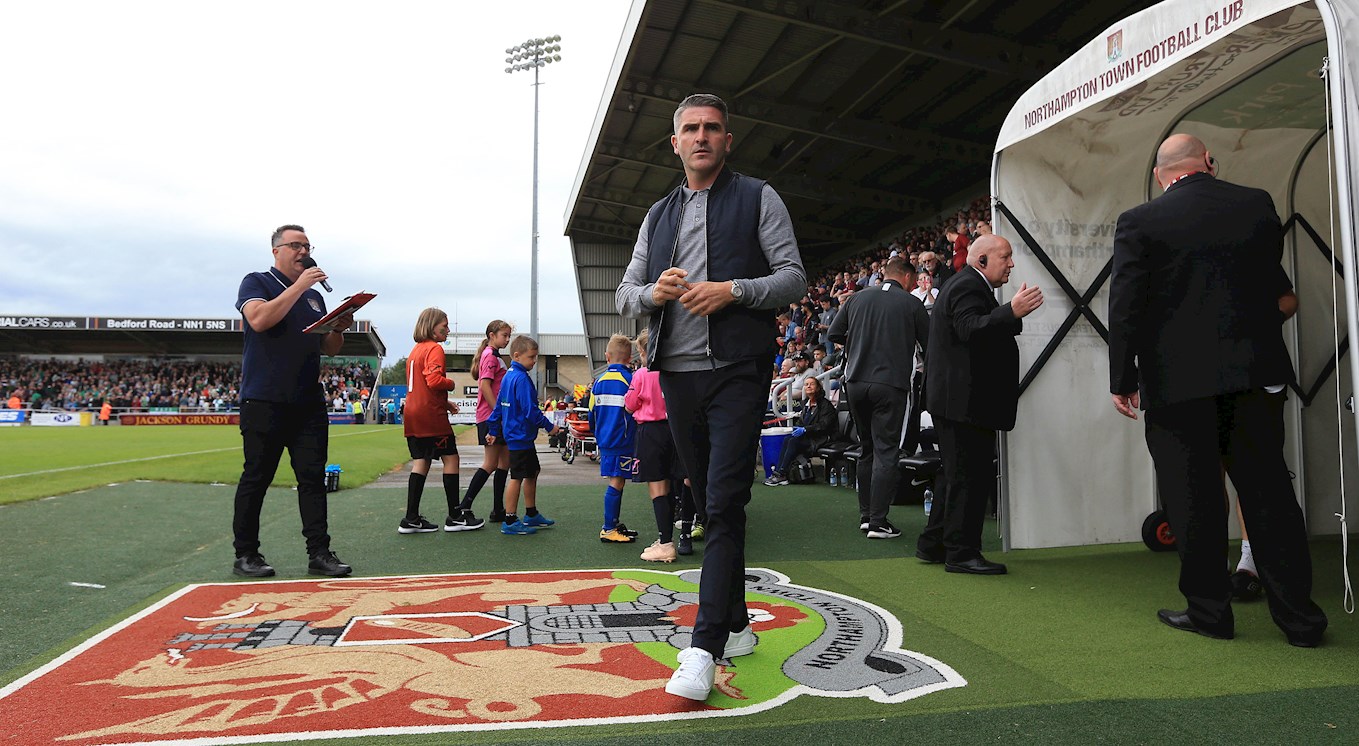 ARGYLE manager Ryan Lowe was disappointed to see his side move away from their usual approach against Northampton Town, falling to a 3-1 defeat in Sky Bet League Two.

Lowe and the Pilgrims took their inventive, attacking style of play to Northamptonshire in search of another win, but fell behind early as Ryan Watson converted a penalty after six minutes. Joe Riley quickly responded via free-kick to make it 1-1, but the hosts’ pressure and organisation saw them forge ahead, with an Andy Williams brace before half time sealing Argyle’s second league defeat of the campaign.

That aforementioned approach from the Cobblers caused the Greens to adjust their strategy in the first half, playing more directly at times. After the match, Lowe spoke about how he wanted his side to back themselves and their style of play a little more.

“Fair play to Northampton – they had a game plan, they stuck to it. The goals, I’ll always say, are avoidable – they’re at our cost. They haven’t ripped us open and played the way we play.

“Second half: we give a good account of ourselves and made a few changes. We brought a couple of players on who changed it for us, a little bit. We were more direct, looking to get the ball forward, but our first half performance cost us three points today.”

The cause of that switch in approach was a busy afternoon for Ryan Taylor, who worked diligently to turn Argyle’s directness into rewards before having to make way in the second half through injury.

“We kept going into Tayls, and I just said to him in there [the dressing room]: he kept getting balls wrapped into him and I don’t want that as a striker,” said Lowe. “It’s not what I want from a striker. I was fine with them pressing us, but we’ve got the ability to get through them. As you’ve seen in the last ten minutes, we can do it.

“He keeps getting a knock on his foot. He has a hell of a bruise on his foot and he’s taken painkillers to play through it, because he wants to play and he’s putting his body on the line. It’s always the way, when you’ve got a bruise, you keep knocking it. He said it was sore, so we got him off the pitch.

“I thought he was magnificent in the first half. He did everything for us. Tayls will do that; he’s strong, he’s solid, he’ll get on the ball for you, and he was a big plus in the first half for us.”

The second half did see the Greens revert to a more methodical approach, with multiple passing moves breaking down the Northampton defence, but not turning into goals. Lowe is keen for his team to completely buy into footballing philosophy, which has helped Argyle towards a strong start to the season.

“I was disappointed that they didn’t do what we were asked to do. They always listen, but in terms of still doing it… I’m not going to change,” said Ryan. “We play football; we play out from the back; we play through the thirds; we create chances. That’s how football should be played. We just weren’t brave enough in the first half to do that.

“In the first half we weren’t going around them enough. We were trying to go through the middle and that’s what they wanted. As you’ve seen, they’re very aggressive and on the front foot, trying to counter. That’s what Keith Curle’s teams do. We should’ve withstood that and kept the ball a bit more, and we didn’t.

“I was disappointed that we didn’t keep the ball today. I need 75% or 70% [possession], minimum 65%, and when you do get that, you end up winning the game most of the time.

“I didn’t want them going long. I feel we’ve got good enough players to do that [play shorter]. We’ve proved it; we’ve done it against Championship opposition last week. We’ll continue to do it. We have certain outlet balls but we kept going long.”