WHILE the contemporary Home Park grounds are in the throes of significant re-development, one member of the Green Army has been doing his best to immortalise the stadium from a bygone era.

Kenny Giles, an architectural visualisation artist and Argyle fan from Yorkshire, has re-created a digital version of Home Park from the 80s/90s in Cinema 4D. The work features a complete visual rendering of the stadium from that era, which includes a faultless reconstruction of the old Lyndhurst and Grandstand enclosures, as well as an inch-perfect impression of the terraces in the Mayflower, Devonport, Barn Park and the old Spion Kop.

The impressive rendering also includes several external areas of ‘old’ Home Park, including the iconic façade, which is currently getting a facelift, and the cladding of the Archibald Leitch-styled Grandstand, which only recently came off the Mayflower as a part of the redevelopment project.

Available on Kenny’s website, www.aquitar.com, is a video of Home Park, alongside a VR option for users to navigate their own tour around virtual Home Park, but what gave Kenny, a Yorkshireman, a passion for Argyle-related architecture in the first-place?

“My dad worked in Plymouth a lot and for my summer holidays I used to go down with him and help him out,” said Kenny. “I just fell in love with the city straight away, especially the seafront and the Hoe. We’d walk up to Home Park for a match – I’d never seen a team play in green before and I thought it was amazing. I just started supporting Argyle then.”

Kenny had his first season-ticket in 1990, and, despite still living in Yorkshire, only missed a few games that season. Childhood memories of wearing his Argyle shirt at school and impersonating his hero Tommy Tynan in the playground led him to undertake the project to immortalise the stadium of his formative years.

“I wanted to show how it looked back in the 1980s through to the 90s, when I first started following Argyle,” Kenny continued. “To me, it’s a proper football stadium and I really miss it. I love the old-fashioned floodlights, you know, the four floodlights. When you used to go to away matches, you’d always be looking for the four floodlights if you couldn’t find the ground.” 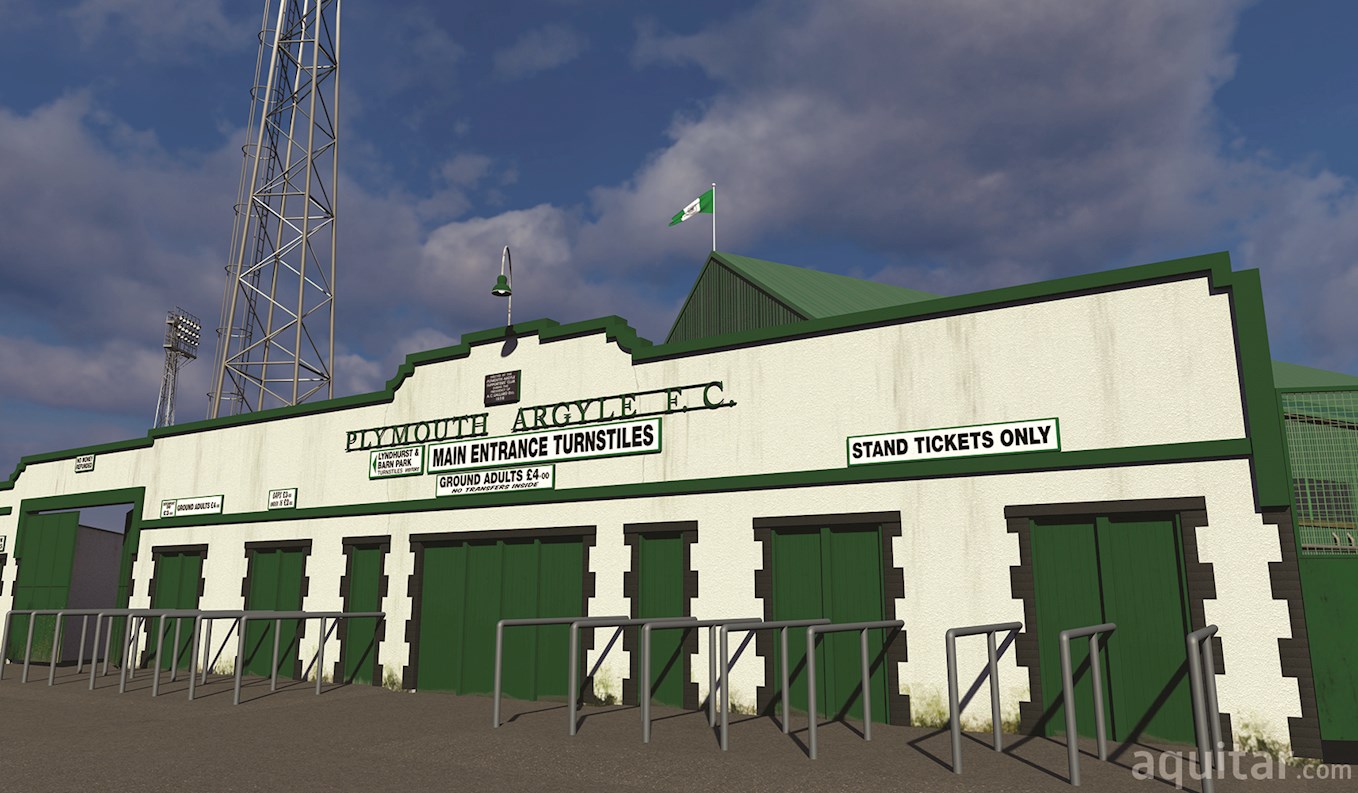 The attention to detail on the project is astounding. The historical accuracy, right the way down to the pitch-side advertising boards, is immaculate.

“I’ve got loads of personal photographs to work from,” said Kenny. “I used to buy old programmes from eBay and look in the programmes. I’ve got old videos, a season review from the 1990s, a game against Bristol City from 1986 – I looked at all the advertising boards to make sure they were in the right place.”

Adorning the hoardings are some Plymouth institutions, including the Western Morning News, Beacon Electrical and Radio Devon – all in the exact position they were found during the late 80s/early 90s Home Park era. Even more staggering, though, is the news that Kenny essentially created his masterpiece by estimates and counting, as no blueprint was available to him when he began work on the project.

“Originally, I counted the seats and the steps, and made sure I counted the barriers in the terraces,” said Kenny, whose last visit to an Argyle game came at Barnsley earlier this season. “I had no measurements at all, it was all guess work. I did it by the eye – also the city in the distance is Plymouth as well, not just a random city. I made sure everything was correct to the best of my ability.

“It took six months, on and off, basically. “I started in late 2017, but because of work commitments I had to put it aside.

“It took about three weeks to render, because for video, a one-second render might take between six to ten hours. With Home Park, the design spans round about 10 years, so what you’ll see is advertising boards from several seasons mixed together.”

Kenny is planning on attending a couple of games at Home Park before the season is out. Suffice to say, it’ll look a little bit different when he visits next time, although the spirit of Tommy Tynan and pylon floodlights will still be lingering somewhere.

To view the full video of Kenny’s labour of love, head to his website – www.aquitar.com. 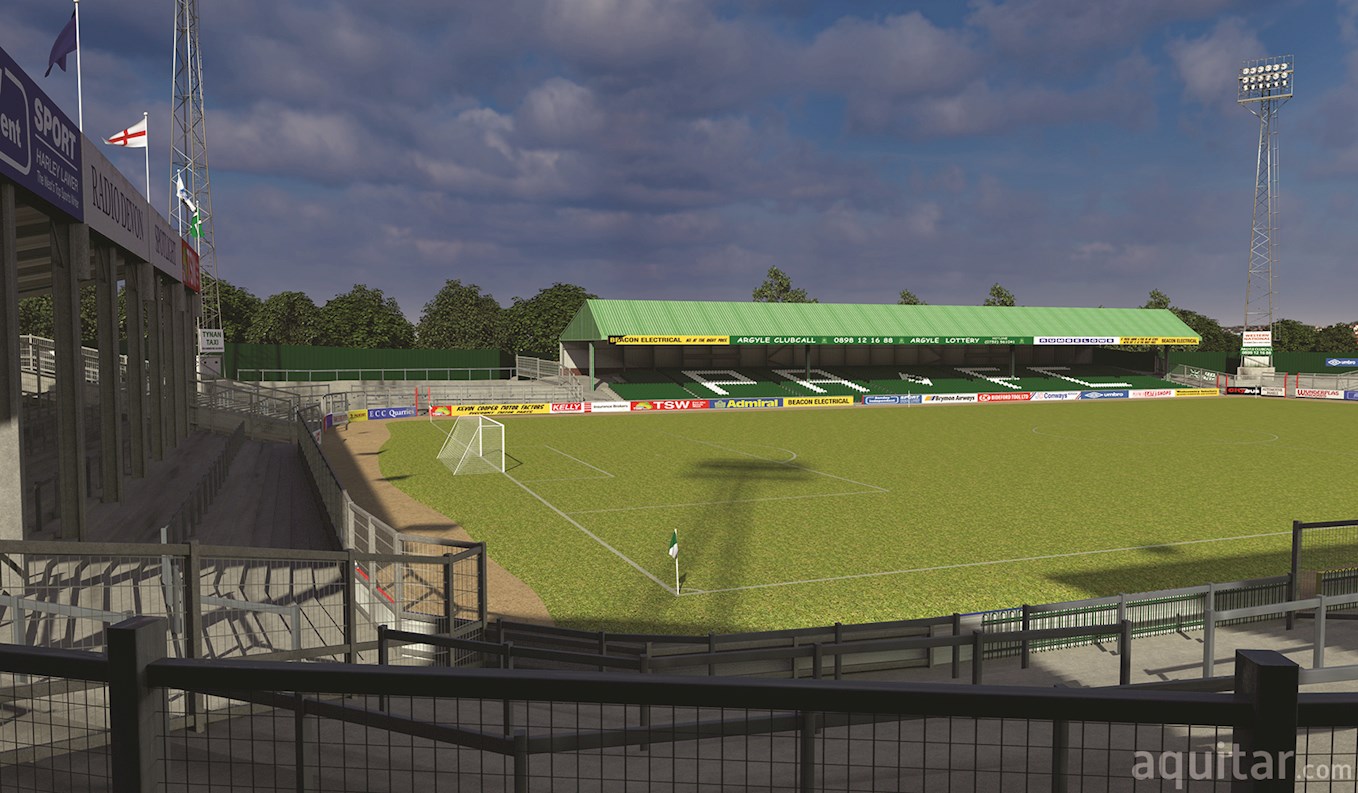