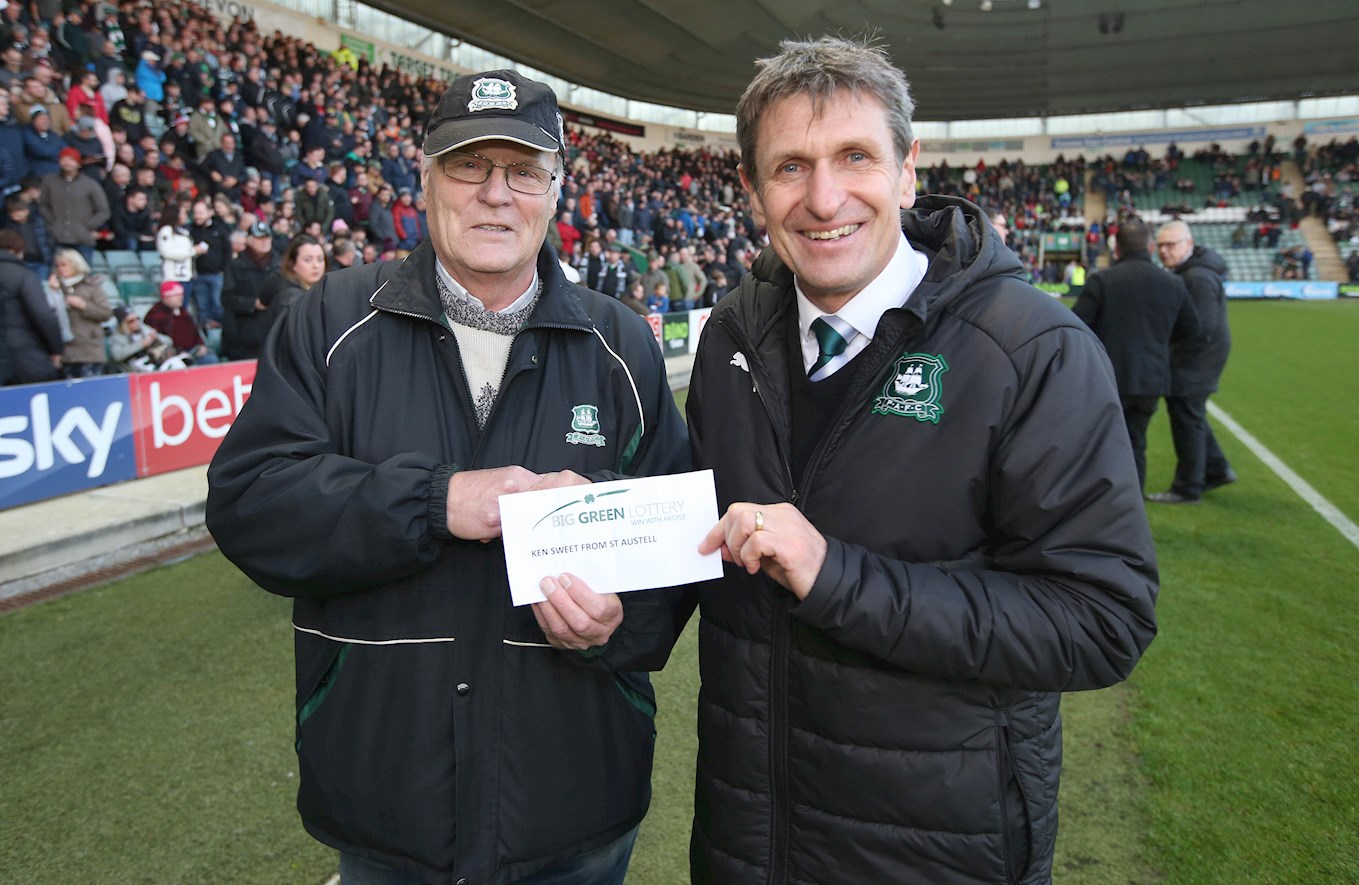 THE New Year started with a superb 3-0 win over Oxford United at Home Park but the day was especially sweet for one lucky member of the Big Green Lottery.

Ken Sweet from St Austell was chosen from 12 finalists on the pitch at half-time as the winner of our grand draw for £12,000 and plans are already in place for his unexpected bonus.

“Initially, it was just excitement to be going out on the hallowed turf,” said Ken. “When the other finalists were being eliminated, I was counting down the number of envelopes disappearing.

“I am not a person to show much emotion but I did put both arms in the air because it was a special moment. The money will go toward helping my daughter and grandchildren, plus an extra holiday for ourselves.”

It is particularly fitting that Ken was the winner, having supported the Lottery for over 10 years and, like all BGL members, playing a major role in raising funds for the Argyle Academy.

His Home Park memories go back a long way and Ken was keen to advise any potential members of the BGL that his story goes to show that the odds of winning superb prizes are very worthwhile.

“I remember my first game at Argyle was with my dad in 1962, an FA Cup tie against Spurs,” said Ken. “I must have gone to games before that but this one stuck in my head, with all the supporters packed into Home Park. The most memorable matches for me were the FA Cup run in 1983-84.

“I joined the Big Green Lottery [formerly Argyle Foundation] in 2008. It helps to bring young players through, which is the future of all football clubs.

“The other reason for joining is the odds of winning prizes. I have obviously won the grand prize now and previously won £500 [on the monthly draw], plus a day watching training when Paul Mariner was in charge.

“I tell people that the odds of winning are so good that it is worth joining the Lottery and helping raise money for the Academy at the same time.”

For more information on the Big Green Lottery, drop us a message on bgl@pafc.co.ukor you can just sign up online, win some money and help raise funds for the Argyle Academy.

As well as the weekly rollover, members of the Big Green Lottery are entered into a monthly draw for £500, the grand annual draw for £12,000 and monthly bonus prizes...plus a discount in the Argyle Superstore and big match ticket priority.