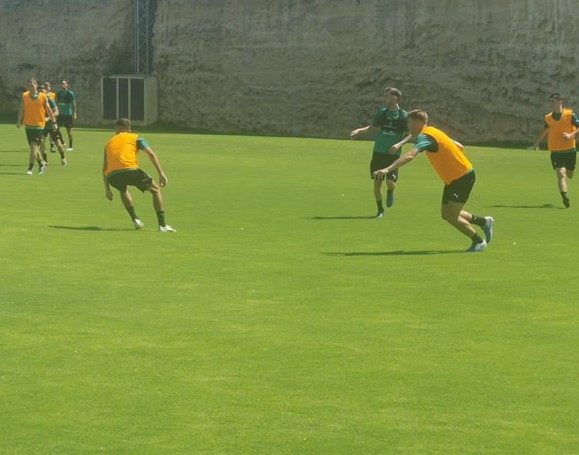 HISTORICALLY speaking, footballers and golf buggies are rarely a match made in heaven. I need not go into details but suffice to say a quick Google search would bring up a good number of tales about football stars and their questionable caddying skills.

Forgive me, then, for being a little apprehensive when I hopped into a buggy on within the resort of Campoamor with Argyle manager Ryan Lowe, who had just stepped off the team coach from Alicante airport. Lowe, with his sunglasses on and hotel bag still on his arm, understandably wanted to see the facilities his players would be adopting as their own this week – so much so that he was yet to check in to his room at the hotel.

“Show us around then, lad.” Lowe grins at me, assuming with confidence that A) I have any idea how to get around the sizeable resort of Campoamor, and B) I know how to drive a buggy without causing an international incident.

We launched the cart down the hill to be swiftly followed by Lowe’s right-hand man, Steven Schumacher, or ‘Schuey’, as he is affectionately known by staff and players alike. Our cart arrives at the base of the sizeable hill where the Pilgrims’ training pitch was located, and, thankfully, I have managed to avoid injuring our manager in the process. Lowe and Schumacher, followed by the rest of the coaching staff, step on to Pitch Two to assess their domain.

A quick stroll around the freshly-cut surface followed. Satisfied with what they had seen, save for a few holes in the pitch that Schuey filled with a little sand, we jump back into the carts and haul back up the hill, where a late lunch is due to be served for the arriving players and staff.

It turns out to be a working lunch, on the staff table at least, where discussions on technical, tactical and social objectives are set for the week ahead. As a fly on the wall (a rather large and conspicuous one, admittedly), what is most striking to me is that, despite only having been a collective management team for a couple of weeks, everyone within the back-room staff already knows their role inside out.

Schuey is diligently discussing the tactical approach with analyst Jimmy Dickinson, scribbling furiously into his notepad – only pausing occasionally to grab a bite of fruit or bread. Meanwhile, Lowe is discussing certain conditioning approaches with John Lucas, Argyle’s new fitness lead. This is clearly a well-worn path for the quartet, who have been doing this together, to great success, for a good while now.

Most pleasing, though, is how natural the dialogue between the new and incumbent coaching staff feels. Schumacher looks across the table on several occasions to seek the counsel of Kevin Nancekivell, a man who knows the club better than any other, and Rhys Wilmot.

But it’s not just the coaching staff that need to find their fit together. For a playing squad with the dynamic of this one, it is arguably the most-important period of the season. If you like, you can divide the playing staff into three distinct sections. First, there’s the senior professionals who have been at the club for a season or more. Second, young prospects early into their professional careers, looking to break-through to the first team. Third, newly signed players, a good proportion of which have come from Lowe’s previous regime at Bury. The key to the success will be to bring all of those together into one cohesive winning culture – as soon as possible.

After letting the clinking of cutlery and coffee cups subside, Lowe moves to the front of the room to address the entire contingent. His message is clear: “we’re here to work, and we’re here to bond.”

In the 12 or so hours that have passed since that speech, much work has gone into both of those objectives. In no particular order, the squad have participated in: a gruelling endurance session; a swimming session (which began as recovery and ended as a competitive pursuit); an early-morning run; gym work; and two sessions addressing the Greens’ shape when out of possession. It has been exhausting just watching from the comfort of my own personal buggy.

At the point of writing this, the players have only been on site for 24 hours.

Time for a siesta. When in Rome, eh?