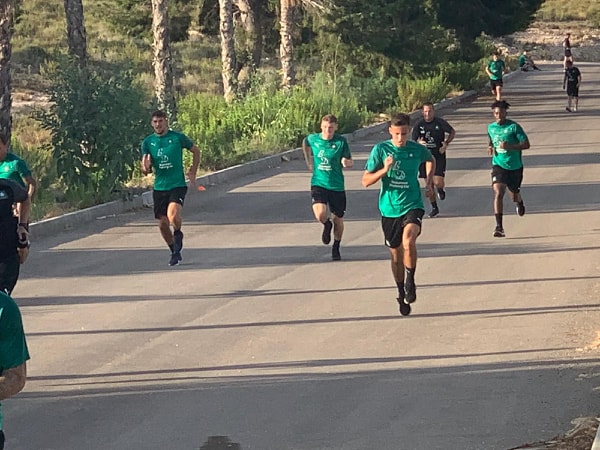 IF there’s anything I know about good relationships, professional or otherwise, it’s that you need to be able to compromise.

The staff arrived at Campoamor with lofty ambitions, and a tight schedule – but I think it speaks to their character, as people, that they are also willing to adapt their plans as evidence becomes available.

The level of instant feedback and analysis of physical condition available to the Pilgrims’ staff these days could rival that of NASA. The club has recently invested in Catapult’s GPS and athlete tracking technology, which provides real-time data on how the squad is coping with the robust training block, which is then analysed by the Pilgrims’ conditioning guru John Lucas.

Thursday, as you might have read, was a brutal physical test for Ryan Lowe’s freshly assembled squad. Between the tactical coaching sessions in the sweltering Costa Blanca sun, to John’s challenging hill sprints and gym sessions, the players had given their all – that much was clear when the management had their daily evening round-table, which I have been privileged enough to sit in on.

Let me be clear (to borrow a Theresa May-ism), that the players have not once complained about the training schedule put in place. In fact, the opposite is probably closer to the truth. Such is the competition for places, and Lowe’s promise that he will select his squad meritocratically, each and every player is running through walls to try and prove themselves worthy of a place in the starting 11.

To cut a long story short, the decision was taken to modify Friday’s schedule to ensure that the players received adequate recovery time ahead of the double session lined up after lunch. The morning’s scheduled hill blast, which makes me feel nauseous merely from taking pictures on the sidelines, was pushed back to early afternoon to aid recovery; switching places with a video analysis session led by Steven Schumacher and analyst Jimmy Dickinson.

Thursday’s training sessions, which evidenced, to my untrained eye at least, an improvement in the cohesion between defensive and midfield units, was scrutinised in an open forum. Specific focus was applied to Saturday’s La Manga opponents, AFC Wimbledon, as well as our opening day clash with Crewe in Sky Bet League Two. “We’ll get there” was Schuey’s closing comment, as the players left the video room and prepared for their afternoon run.

Of course, I cannot disclose any of the finer details of the meeting, as my classified access will surely be revoked - and I do not fancy my chances in a scrap with former police officer Rhys Wilmot.

What I can disclose, though, is that the players clearly appreciated the gesture, and a morning of mental, rather than physical, toil. With an extra few hours’ opportunity to refuel and recover, a sea of Puma-clad Green gladiators hauled themselves up and down the hills of Campoamor in the early afternoon with renewed vitality.

On the third day of the tour, I am starting to get an idea of the coaching philosophy that Lowe and his staff espouse – and the squad might just be, too.

The biggest test of our development will come on Saturday morning against AFC Wimbledon in La Manga. Whatever happens in that game, though, I tend to align my views with those of our Assistant Manager.