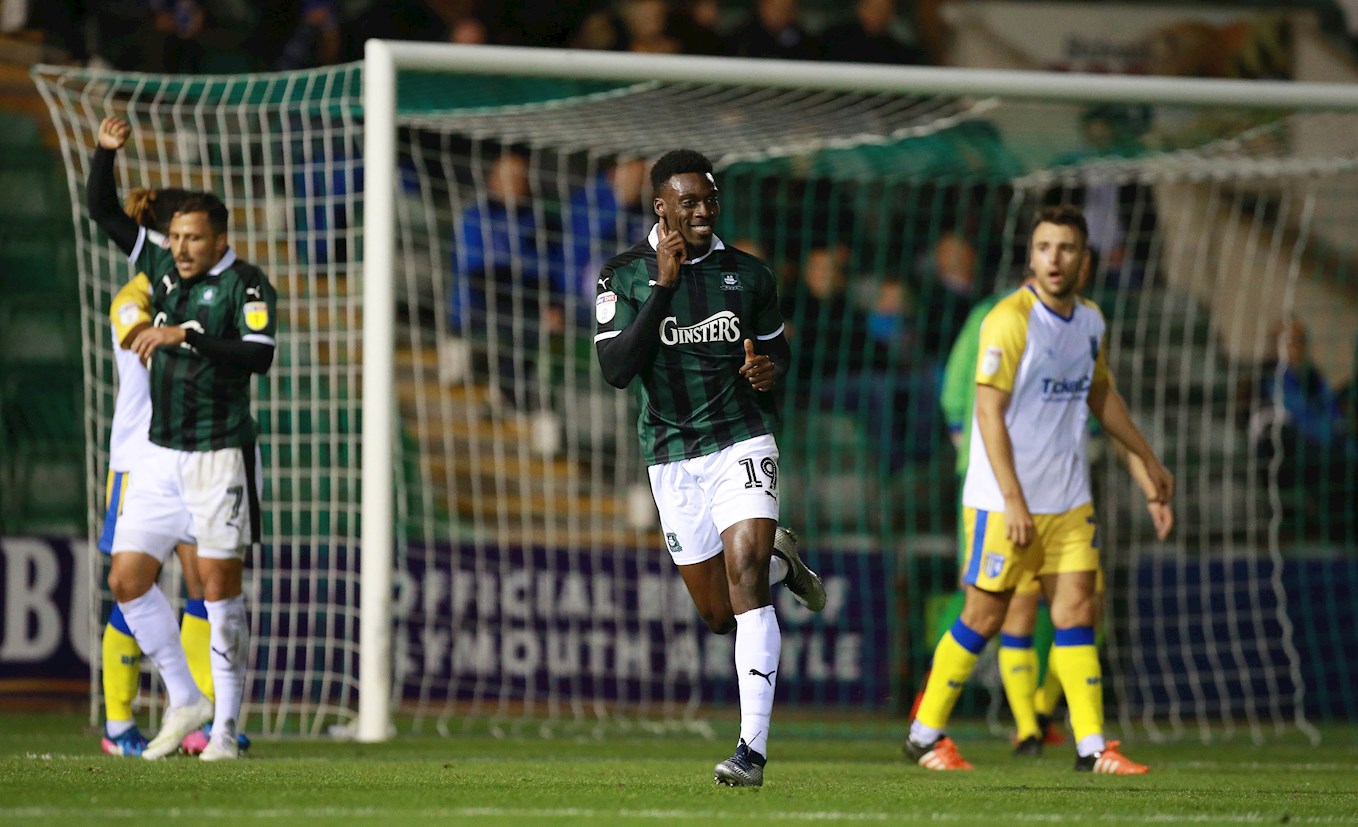 WITH just 11 games of the season remaining, Freddie Ladapo is looking to increase his total number of goals further.

Argyle’s leading scorer already has 15 to his tally and there have been five occasions where the striker has netted two goals in one game.

Luton Town visit Home Park on Saturday in Sky Bet League One and Freddie will again be a major goal-threat for the Pilgrims.

“Whenever people tell me my stats, I don’t think it surprises me because last season I was making my Premier League debut, so it’s not like I’m coming from somewhere not good,” said Freddie.

“I hope to get back there, I think I need to keep proving to people that I’ve got the quality and the ability to score braces and everything.

“From my first interview, I always had my targets and I’ve still got quite a lot of goals left to score but I’m on track. My ambitions are to get back from where I fell from, good performances and a lot of goals.”

Freddie was at non-league side Margate back in the 2015-2016 season and pushed his way up to sign for Crystal Palace in the Premier League before being released after going on loan to Oldham and Shrewsbury.

“When you drop down a couple of leagues, it is sort of like falling but I don’t think it’s a bad thing as long as you pick yourself back up and get where you need to be, that’s all that matters,” he said.

“It’s a huge learning curve, life throws a lot of curveballs at you that you have to then deal with.

“You may find yourself in the promised land, good scenery, good facilities, and then all of a sudden you might find yourself in a non-league facility and then you have to take that with you, and try to make the best out of it.

“When you make that push from non-league to Premier League, it is drastic and I’m not sure many people make that direct move.

“When you have players that have been bought for millions and are on a lot of money, it’s hard to break into the team, so to come down and actually prove to people with regular games that I can score goals is what I’ve always wanted to do.

“That’s what I came here for, the regular games and to prove to people that from those games, good things can come of it.

“To have scored 15 goals right now is obviously what I wanted and where I’m looking to see my career.

“The reason that brought me to Plymouth in the first place was seeing the quality of Graham [Carey] and Ruben [Lameiras]; the assists, the good link-up playing and everything they do on the pitch helps me to score more goals.”

Freddie has often taken the role of Argyle’s attacking fulcrum between Carey and Lameiras this season, but the option of playing alongside Ryan Taylor in a different formation remains available to manager Derek Adams.

The key for Freddie is to study the best in the business, learn from them and try to implement that in his own game.

“Most of my career I’ve played up front as a solo striker,” he said.

“Coming to the club, I watched them play the 4-3-3 with the one striker, so that is what I’ve been more used to because we’ve played it more regularly but Ryan [Taylor] has a lot to offer to the team, and hopefully we can find a way to get around things.

“I watch the best, so I want to be the best, those guys score goals out of nothing.

“When you watch them, you can pick up and learn things from them and from some of the goals I’ve scored, you might be thinking ‘he must’ve been watching some of these players`’,

“I obviously had ambitions as a player to return to the Premier League and make a lot out of my short career, so hopefully good things happen from now until the end of the season.”