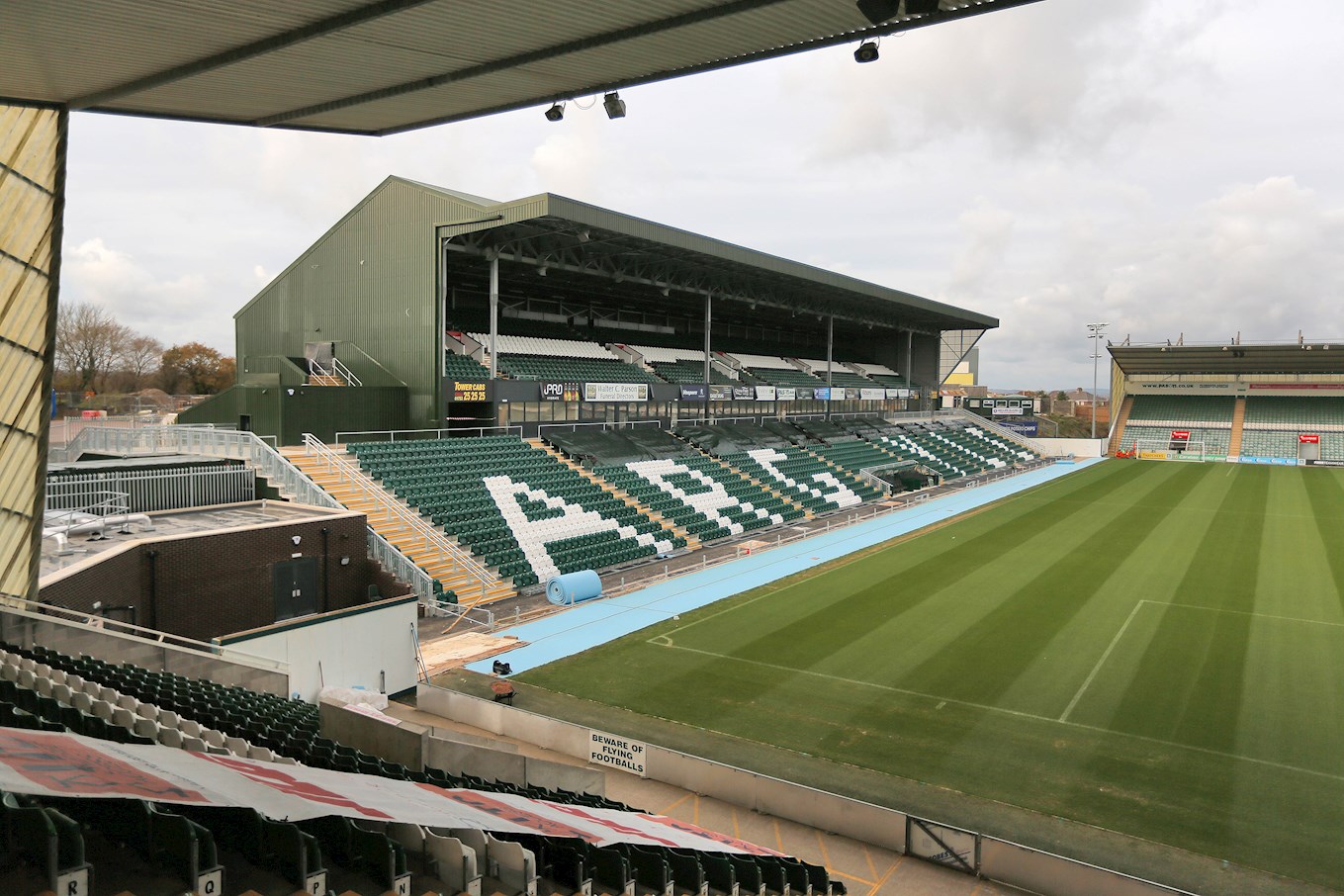 WITH Christmas just a month away, we are on the verge of being able to host the Green Army back in our splendid, beautiful, awesome Mayflower grandstand.

Goodness me – it has been a tough, testing, challenging, yet incredibly rewarding, couple of years.

We are extremely excited to be entering the fit-out stage of the development, and our first test event on Sunday, December 8, for the Argyle Ladies game against Watford.

The following test event, the visit of Derek Adams’ Morecambe on Saturday, December 14, will see just two years to the day that the planning officers of Plymouth City Council received an ovation when they approved the plans for Home Park Stadium.

April and May 2018 saw the start of the enabling work, with the old Far Post Club finally saying a fond farewell. Remember, too, that we were still using the old grandstand up to the end of the 2017-18 season. It is just amazing how much has happened in a relatively short period of time since.

After the Far Post Club bit the dust, the enabling work continued apace, with the first installation – our new match-day control room – being lifted into place mid-July.

With the main contract signed on the August 9, 2018 – my 51st birthday, as it happened – we really started to see big changes afoot, with the old Chisholm Lounge and Mayflower terrace making way to the excavators in the same month.

The start of the 2018-19 season saw us install an entire temporary mini-village for the players outside of the Devonport End, complete with a temporary match-day tunnel coming out next to the old Spion Kop.

Then, over the following year, we have seen a whole new changing facility built and opened; a new shop; ticket office and fantastic two-storey supporters’ bar.

During the tail-end of 2018, we saw the old gal herself unceremoniously stripped back to her bare bones – remember, she still had her roof on last November – before the detailed remodelling, extending and re-building commenced.

Wind forward to today, and wow! I think that everyone who was inside the stadium on Saturday, for the game against Bradford, was just blown away at their first full look of the new Mayflower Grandstand. Simply, it looks just magnificent.

For me, and many that I have shown around, the first thing that hits you is the sheer size and scale of the building. It looks great from the rear – indeed I love the attention to detail that has been taken. From the overall design and shape, to the smallest detail, such as the colour-keyed extraction system, it looks a quality, handsome building.

It is when you stand on the new lower terrace and look up that the scale hits you most. It is awesome, and I have lost count of the number of players, coaching staff and visitors that have told me that it is one of the most impressive stands than they have ever played in front of.

With four main areas on the ground floor – the main Club Argyle hospitality and conferencing area; two large suites in the middle (one our new Boardroom); plus, maybe my favourite space, the new players’ lounge at the far end. Thanks to the quality of the facilities, both the match-day experience and the scores of different, flexible non match-day uses will be unrivalled in our area.

Every single room faces the pitch, so whether you are wining, dining and cheering on the lads on a Saturday; meeting and greeting colleagues at a conference, or holding a special family event in any one of the four main areas, it will be a high-quality experience. There is a space for everyone and everything. I love it. Genuinely, I love it – even though it is all high-end with modern facilities, you never forget that you are in the middle of an historic piece of football architecture. You will love it, too, I am certain of that.

If you are interested in being part of it, get in quick – the match-day Club Argyle packages have been flying out, and the response from the South West business communities has been remarkable. We have already secured tens of thousands of pounds of bookings – every penny of course going back into Plymouth Argyle Football Club. No loans, no mortgages, no debt. Thanks Simon and Jane!

In fact, one of the many things that happened over the past few months saw Simon and Jane (and the wider Board) quietly agree to a number of upgrades to the project which will be really noticeable when you are in there. At an additional cost of several hundreds of thousands of pounds, improved fixtures, fittings and finishes really lift the already great end result, and the addition of things like high-end resin floors throughout the grandstand will aid maintenance and longevity, as well as look fantastic.

So, what is next?

Well, we are currently working through the end of project sign-off and certification process. This is a wide-ranging and complex matter; more so because of the building being part of a football stadium. In addition to the already onerous requirements mandated by building regulations, we also need to satisfy the requirements of our Safety Advisory Group, the body that will grant our new safety certificate.

As we move through this process, snags and small issues will arise, but we are ready and prepared for, to coin former US Government Secretary of Defense Donald Rumsfeld’s phrase, our ‘known unknowns’.

We have now already secured sign-off for the ground floor and are working hard to finalise every single outstanding issue for the upper floor.

There is a tremendous amount of Is to be dotted and Ts to be crossed before we can get up and running for the December 8. I must say, it is going to be close, but I remain hopeful that we will have the Green Army sitting in at least some parts of the Mayflower Grandstand for what will be a very special day when our Ladies’ team hosts Watford in under two weeks’ time. Not certain, but very hopeful…

Those of you at the game on Saturday (or who may have seen the photos) will have seen that I played around with some temporary green lights in the upper tier of the Grandstand – I wanted to add to the buzz that the entire stadium had last weekend and I must say, it has given us food for thought about what to do in the future.

I really should thank our long-time club sparkies – and main project sub-contractors – CTI Power, for helping make the green-light thought a reality. There are scores more people that I will thank in due course, but let’s get the Home Park full, open and rocking first!

Finally, thanks to everyone for the messages of support over the past few weeks – the positivity that is now flowing about how great Home Park is looking is tremendously uplifting. I am really appreciative of every single comment.

So, thanks everyone. Not long now.