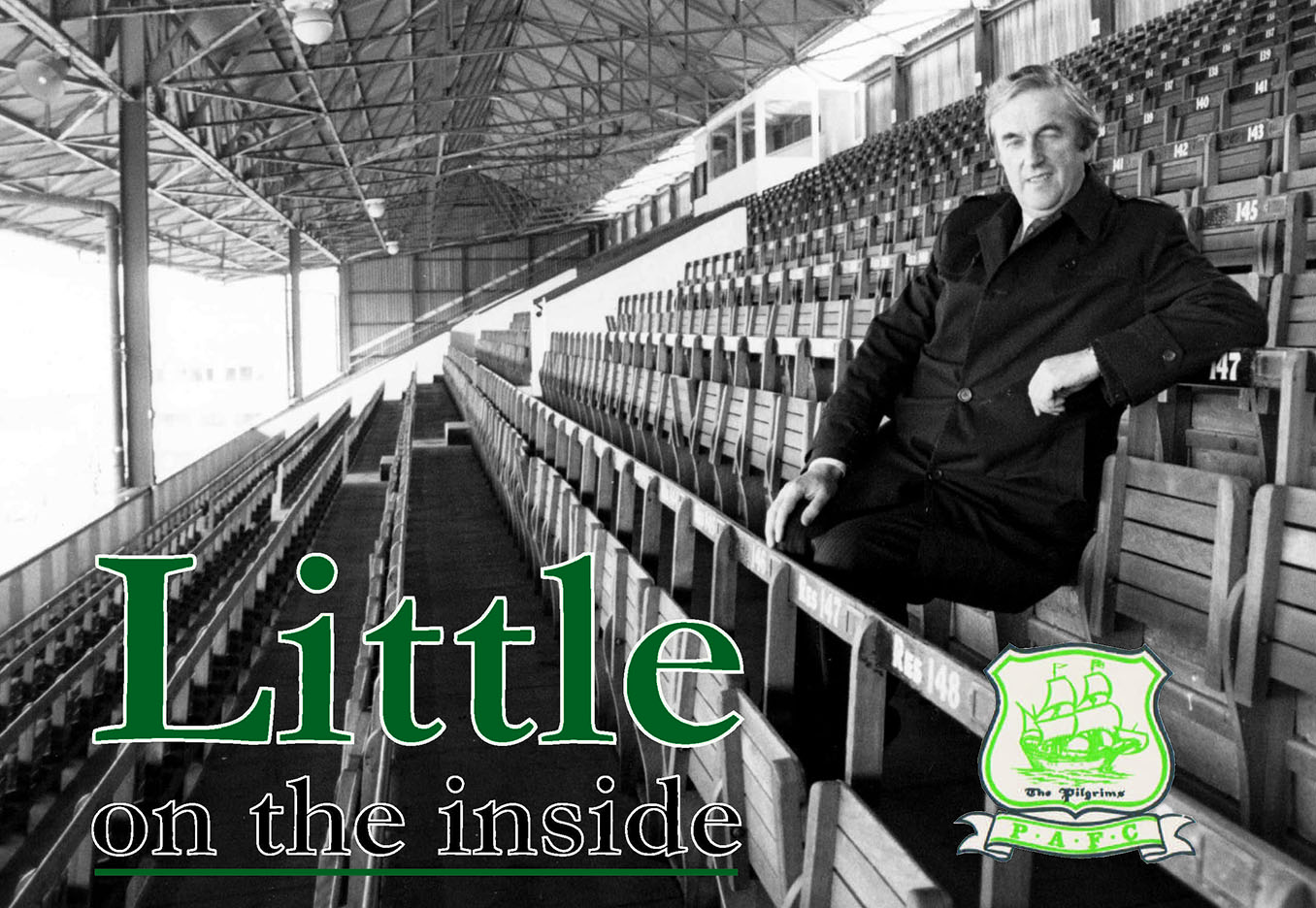 Little on the Inside

CHRIS Groves has spent months in conversation with Graham Little, Argyle’s Club Secretary for 26 years, to produce Little: On The Inside – a compendium of insightful and entertaining stories from Little’s career at Home Park. Here, he tells us the inspiration behind the newly released book.

Sentiment has never been less relevant in professional football than it is right now.

For every badge kissed and vote of confidence made, a transfer request or managerial sacking is often forthcoming. All the way from the top, with trigger-happy owners, down to the terraces, with vocal minorities using the consequence-less power of social media to hurl abuse at players after a bad performance, the concept of backing anything in football that doesn’t purely constitute success is, today, pretty extreme.

We usually accept – and borderline embrace – these sociopathic tendencies in our game, justifying it as “just business” or “a sign of the times”. It may sadden me somewhat, but it’s a strategy I respect and understand. Any modern-day football club stands to jeopardise their progression by making decisions based on emotion, whilst their adversaries are busy making theirs based on balance sheets. Romantic stories of club loyalty and sound moral compasses are all very well, but they count for very little if they’re not contributing to points or prizes.

In case you hadn’t noticed in the opening throes of this introduction, working within the weird and wonderful world of football tends to give you a hardened view of the sport, which can often drop into the realms of cynicism. I do love football. Honestly.

An unwavering love of football was exactly what I found when I attended the Plymouth Argyle Heritage Archive’s inaugural exhibition of club memorabilia on May 25, 2017. The event displayed a terrific selection of artefacts, items and tidbits relating to the football club’s rich history. An array of photographs tracking the Pilgrims’ ups and downs, moments in the sun and tussles with disaster, caught the eye of all in attendance. Some images told their own story, whilst others were simply a curious platform for a tale to be told by the supplier of the majority of those photographs: Graham Little.

Little gave 26 years of his life to taking on the role of Club Secretary; a role almost as precarious and short-lived at that time as a modern-day Manager. A Plymothian born and bred, through and through, Graham took his love of Argyle, his management skills and his unquestionable loyalty, and used them to forge a legacy at the club. Through thick and thin, promotions and relegations, joy and despair, Graham was there – doing his job, making the lives of others easier, and being the ever-present conscience of a football club that each one needs.

One of the first things Graham said to me in our initial chat was: “people keep saying I should write a book”. It didn’t take too long to find out exactly why so many people thought this was a good idea. Later that night, Little would have the whole crowd smiling, chuckling and shaking their heads in disbelief, as he reeled off tale after tale of his dealings with Argyle heroes, unheard tales of the inner workings of the club, and his chance meetings with some global footballing legends. As he said to me himself, Graham could’ve gone on all night with his stunningly vivid recollections of his experiences within football. Little had plenty more anecdotal nuggets stored away in his memory bank, many of which being tied to a specific photo or piece of Argyle paraphernalia he had relentlessly collected over the years. I knew that Graham’s stories and collections had to be made more publicly available. I just wasn’t sure how to make it happen.

It was Rick Cowdery – Argyle’s Head of Communications, and the person who has opened more doors for me than I could care to remember, or he would dare to admit – who, shortly after that meeting, mentioned the idea of designing a book solely based around Graham’s stories and mementos. I can be a naturally cautious person at times, unwilling to take on something that carries a high degree of risk or uncertainty. My initial reaction to the idea of writing this book was pessimistic and non-committal. Writing a book was something I’d never done before, and the plan was to write one about a person I’ve only just met, juggling my day job and my commitments with Argyle at the same time. I genuinely feel like if the book was based around almost any other person, I would have played it safe and turned down the idea. But, I just couldn’t do that, because I already knew at that point that I had just met someone rather special, whose stories and achievements deserved a far greater audience.

When I visited Graham at his house for the first time, it immediately became clear that we wouldn’t be partaking in some kind of bland, processional question-and-answer sessions until we had enough content to justify publishing a book. He was simply eager to tell me about his time at the club and all the unlikely capers he got up to. All I had to do was ask the right question or mention the right person, hit record on my Dictaphone, and we were off to the races. The thought of how a story would fit into the book rarely seemed to cross his mind, and it hardly ever crossed mine. Graham was simply enjoying telling these tales to me; the fact that what he was saying was perfect content for a book was simply a bonus.

Graham and I met once a week for a number of months to gather these tales together. Once he began to run a little dry on stories he hadn’t told me, we met once every fortnight. Often, we would spend half of our time just talking about Argyle’s last match and the rest of the weekend’s football. He would be eager to know how the club operates today, compared to his time, and just wanted to talk football like any other fan would. Graham’s passion for the game that helped him become such a success as a Club Secretary has certainly not subsided. Not one bit.

The tales Graham has told me justify the idea of writing a book on their own, for sure. From meetings with the stars, to the inside scoop on major stories, to hilarious escapades with friends and co-workers, a simple collection of his stories, presented without context, would be a good read. The reason this book has become so important for me to create, however, is that context: the man himself. All of those moments were lived out by a person who wanted nothing but to live his best life, and to help those around him achieve success. I can’t stress that point enough as, for me, that makes what you’re about to read even more enjoyable. If you’re anything like me, it will remind you why you love football all over again, too.

Graham is a truly remarkable person. Boasting an outstanding memory, a deep sense of perspective and a desire to enrich the lives of others through his own experiences, I’d have to urge to write a book about Mr Little, even if he wasn’t a cornerstone of the club I – and so many of us – love. His personality, combined with his tremendous stories and personal items to augment them further still, make for an incredible collection of footballing tales. Here, you’ll find so many of them, split up into over 30 chapters, lived and recalled by the man himself, purely formatted and presented by myself.

I sincerely hope and, dare I say, expect, that you will enjoy hearing what Graham Little has to say as much I as I did.

Little: On The Inside is available to purchase in the Argyle Superstore for £15.99