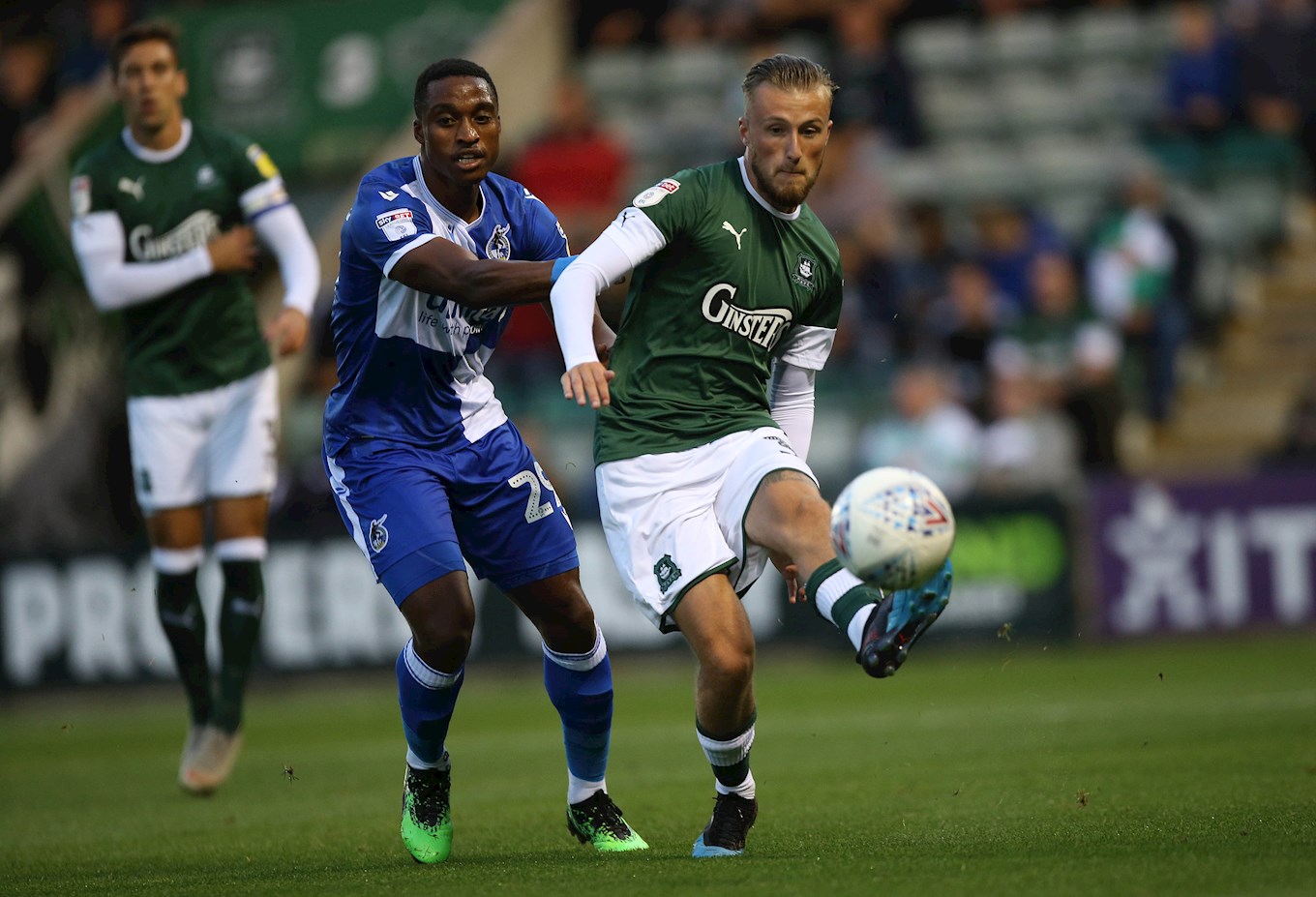 ARGYLE came from behind to beat Bristol Rovers 5-3 on penalties after the Leasing.com Trophy after the fixture finished 1-1 in normal time on a special night for some debutants.

The Greens lined up with a much-changed XI from Saturday’s 3-1 loss at the hands of Northampton Town. As a result of the wholesale changes, full first-team debuts were handed to last week’s loan signing George Cooper, Academy products Klaidi Lolos and Adam Randell, and a long-awaited run out for defender Will Aimson.

Aimson joined Argyle from Bury in the summer but an injury he obtained prior to signing meant that he had to wait for his first chance to don the Green jersey, and Argyle manager Ryan Lowe was happy the commanding centre-half was able to get his first minutes of the season.

“He was fantastic,” said Lowe, “I’m pleased for him because he’s worked hard, and we’ve had to put him back a bit to make sure it’s the right game he plays.

“He was only pencilled in for 45 minutes, and I did want to give him a bit more, but we’re cautious, very cautious that if we did, he could have done something.”

Lowe was also very pleased with another of his new boys, George Cooper. Although he joined on Thursday and came off the bench on Saturday [against Northampton], this was Cooper’s first start.

Ryan said: “He’s exciting, isn’t he? That’s what he’s got – both feet, he can play [left] wing-back, right wing-back, left of the three in midfield, right of the three, off the front as you’ve seen. He’s an excellent talent, he’s exciting and that’s why we’ve brought him, but he does need to get fit.

“He was unlucky with a few [against Rovers], on another day he probably could have scored two or three, but he’s a big coup for us and he’s going to excite the fans.”

The gaffer was full of praise for the two Academy products who started the game, Adam Randell and Klaidi Lolos – both of whom scored their penalties in the shootout.

Lolos was a doubt for the game after dislocating his shoulder on the weekend, many Argyle fans could be forgiven for thinking the young striker would have been out for some time due to a tweet which pictured his arm in a sling, a sentiment Lowe shared.

“I think he just wanted a nice picture to put on twitter to say that he was injured,” said Ryan. “Apparently, he’s done it before a few times last season and it goes in and then after a day it settles down and to be fair to him, he’s made himself available which was good for him.”

“I’m happy with him in certain aspects, he’s only a baby, he needs to get better at certain things and they’re the games he will get better in.”

Adam Randell came in for Joe Edwards at the base of the midfield three, and Lowe believes Randell can benefit from being around the man he replaced. “We know Adam, he’s a very good player, intelligent player,” said Ryan. “He’s a little miniature Joe Edwards if you like. He’s got a lot to learn from Joe, who has been terrific as well.

“I think when you give a young boy his debut like that, they’re always cautious aren’t they? They want to make sure they don’t give the ball away a lot.

“The two of them [Lolos and Randell] were fantastic, they didn’t put a foot wrong. I want them to do a little bit better but that’s just the standards. I’m sure the more they train with us, the more games they play in and get on to the pitch, whether it’s as substitutes or whatever it is – they will get better.”