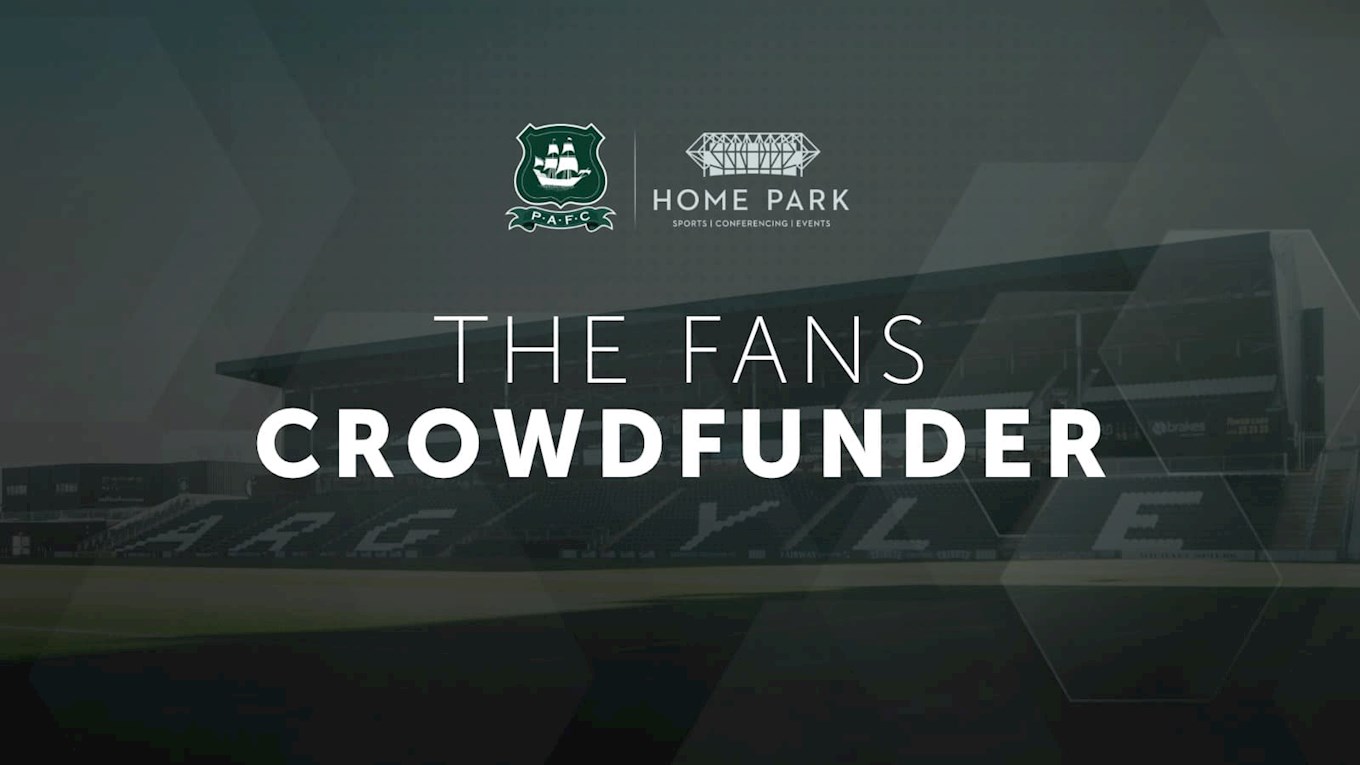 AS our Crowdfunder campaign nears the £40,000 milestone, the club would like to place our thanks on record for the incredible generosity shown by our community.

The response to our Fans’ Crowdfunder from the Green Army has been nothing short of exceptional. Nearly 350 fans, from all corners of the globe, have supported our efforts to improve cashflow while there is no football to be played, which, in turn, helps us to support our local suppliers.

On top of supporting the club’s financial position, our pledge to donate one ticket for every £100 raised in the campaign to NHS workers from Devon and Cornwall, as well as the option to purchase a ticket for NHS staff directly, means that over 400 tickets have been generated for our health heroes to be used during the Pilgrims’ 20/21 EFL season.

Rewards start from as low as £10, rising to £25,000 – the price of the as yet unclaimed Barn Park Stand sponsorship.

While the majority of pledges have kindly been made by individuals and their families, a couple of high-value contributions have also been delivered by two Argyle supporters’ groups.

Speaking of the commitment, the AFT’s John Lloyd said: “When Plymouth Argyle launched the Fans’ Crowdfunder initiative two weeks ago, the Argyle Fans’ Trust was delighted to be amongst the first to make a major contribution to the campaign, committing £2500 from our reserves to secure one of the Platinum packages.

“At this difficult time for us all, it was a great way for the AFT to demonstrate our ongoing support for the club, its board, players and staff - and for all of those who are a part of the Argyle family.

“The AFT was originally formed at a time of great crisis for the club and we are happy to have been able to lend a helping hand again now.”

Meanwhile, the Argyle supporters’ web forum PASOTI has pledged a contribution of two Gold Packages, entitling them to eight season-tickets in total, and eight home shirts.

“Every year, one of our kind sponsors, a businessman in Dubai, buys four season tickets for PASOTI to distribute to less fortunate Argyle fans,” explained PASOTI’s Ian Newell. “He’s done it for the last four or five years. We hand them out on a match-by-match basis.

“I was about to head out to Dubai on holiday, but I had to cancel it because of what’s going on. I was chatting to him about it, and I asked him if he fancied contributing a bit more money, showing him the Crowdfunding campaign.”

“This way, we get the usual four tickets, plus a few more bits like shirts, which we can raffle off and raise some more money. In the end, he’s contributed to two packages.”

The man behind the donation, Dean Kemble, was a season-ticket holder at Home Park until moving to the UAE in 2007.

“It is something that I’ve done ever since administration by purchasing season tickets for others every year - it’s my way of giving something back. A man from Liskeard by the name of Ray Body, who unfortunately passed away in recent months, took me to my first Argyle game as a 15-year-old -a local derby against Bristol Rovers in 1994. I’ve been hooked ever since.”

Despite initially planning to donate four tickets to NHS staff, and retaining four for other uses, members of PASOTI have opted to donate these season-tickets directly to Argyle supporting members of the NHS.

An Argyle-mad married couple, Charlie and Graham Pattison, were blown away to receive theirs.

“As huge Argyle fans, when PASOTI contacted us about wanting to say thank you for the work we are doing, we were very touched,” said Charlie, who works as a Doctor’s Assistant on bowel and liver surgical wards. “I was a season ticket holder for many years but unfortunately had to give my membership up a couple of years ago, so when we were approached it was a wonderful feeling! We are extremely grateful, we never expected it.”

The strength of public sentiment towards the NHS at this time is unprecedented, and the staff at Argyle share in that feeling. The club’s Board of Directors moved swiftly to offer up Home Park Stadium to be used for essential phlebotomy and antenatal services, while the club’s head groundsman, Chris Ralph, sculpted a ‘Thank You NHS’ message into the pitch to serve as a motivational message for those working within the Mayflower Grandstand.

“Whenever there are big changes within a workplace, it can cause great anxiety and create new challenges,” said Charlie, whose husband works as an oncology nurse. “No one has experienced anything like this before and it has been uncertain times for everyone, not just for NHS staff.

“The support from the public has been very special, it is uplifting and appreciated by all the frontline staff.”

“We are tackling this head on as one big team. We have had to diversify and change our ways of working. This wouldn’t be happening without excellent planning and everyone embracing the challenge, we are the sum of all our parts and many small changes have made these results possible.”

Charlie continued: “I do feel that Argyle deserve recognition during this period and would like to thank the club for their support. Allowing the NHS to use the Grandstand for outpatients’ services has been a huge help in maintaining services in a safe manner and avoiding patients entering Derriford Hospital unnecessarily during this period. It is these gestures of help that can make such a big difference and as a city we can be proud of our NHS Trust and football club.”

Such is the strength of affection for our NHS heroes at this time, PASOTI has gone on to receive further package donations from a Las Vegas-based supporter, as well as generating enough funding through its members to purchase an extra season-ticket, bringing their total to 17 season-tickets.

There are still several weeks left to show your support to our Fans’ Crowdfunder initiative, and a number of great rewards to choose from – for all budgets. Click here to find out more.