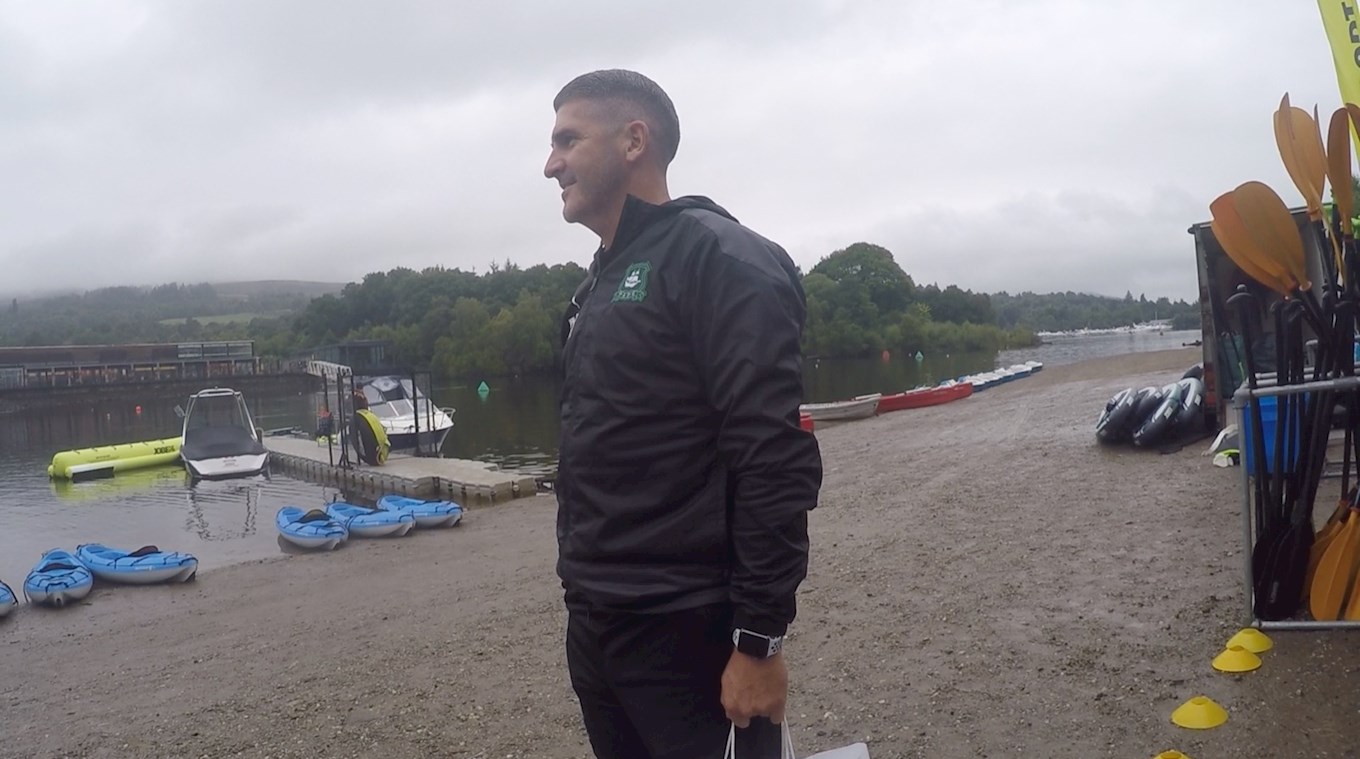 Argyle in Scotland: Part One

We sent pafc.co.uk's Dan Cole to Scotland with the Argyle squad to document the Greens' unique 20/21 pre-season excursion. Here's his take on the tour so far...

I have barely had the pleasure of dumping my luggage into my hotel room, which I am sharing with Matchday Moments legend Charlie Rose this week, before our first-team manager has hooked me on the phone and instructed me to meet him in the lobby.

Mask on, elevator button pressed, I head down into the reception area to find our manager and director of football Neil Dewsnip deep in discussion about the days ahead.

As I sit down, Lowe turns his attention away from Dewsnip and focuses on me: “We’ve got a new player coming up, he’s arriving now. Get something ready.” He flashes me a grin, as I process the information with a clearly gormless expression upon my face. “We don’t hang about, lad.”

A quick conversation on the announcement protocols follow: Who is he? Lewis Macleod. When will the contract be signed? Tomorrow lunchtime.  What is his squad number? 16. What time can we announce it? As soon as the paperwork is filed. The coffee on our table is still piping hot and we are already flying.

He catches me off guard again: “Right, let’s go for a run. Can you run?”

I suppose the answer is relative. For those who have not yet had the misfortune to witness me waddle around pitch-side on a match-day, I would describe myself as built for comfort, rather than speed. Ryan Lowe, on the other hand, has had a two decade long professional football career, in which he was rarely injured, and only recently hung up his boots.

We are off. We agree that I will let Ryan know when I can no longer keep up, and begin to jog side-by-side through the streets near our hotel. Lowe moves effortlessly alongside me, talking through the week’s plans, while I sputter one-word responses at him and try not to fall over.

The information is relayed – an intense training regime led by head of fitness and conditioning John Lucas is a given. The itinerary is packed with double sessions and team-building activities. The function of the trip is evident: to help maintain the winning culture which took hold last season, to bed in new players, and to enhance cohesion. It would all sound so good if I could focus on anything other than being so very out of shape.

Two kilometres in, with the manager still having barely broken a sweat, I wave him off and make my way back to the hotel at a more pedestrian pace.

Ryan is out of sight in seconds. “We don’t hang about, lad” springs to mind once more.

Back in the hotel, the coaching staff run through their aims and objectives for the tour. Having been the only member of non-football staff privileged enough to attend both tours of the Ryan Lowe era at Argyle, much of it appears familiar to me. And with this team’s record, two promotions in their two full seasons of management, there is no denying the methodology is proven.

Of course, there are some quite significant differences between this tour and last. In order to get the go ahead for this training camp to take place, the team were required to be COVID tested back at Home Park before setting off – and once again at breakfast after their first night in the hotel.

We have two members of club staff on site administering the tests, and they have set up two stations in the team’s private dining area. While the task they are undertaking is identical, their professional backgrounds could not be further apart.

Servicing the left queue, you have Champions League winning physiotherapist Dave Galley. Testing on the right, you have John Spreadbridge, a man who took a job as the club’s head of facilities the week that lockdown began and was swiftly handed the poisoned chalice of becoming Argyle’s designated COVID officer. Stinking timing. He has been nicknamed ‘Covid John’ by the playing staff – and I suspect that will stick with him for as long as he works at Argyle. He wears it with good grace. He has little choice.

In my experience, Dave is slightly gentler when administering the test – a tickle of both tonsils, and then a jab up the nose – but there is not much in it. Once you have had your turn, you are free to grab some breakfast, with the ambient noise of Scott Wootton gagging on a nasal swab occurring five metres away. Yum.

By the time the lads have completed their first training session (in completely COVID-secure conditions, I must stress), the results are back – all clear. After lunch, we head up to the Loch Lomond region for some team-building.

There are two options for the afternoon’s excursion, and the players can select which they attend. Assistant manager Steven Schumacher takes half of the group for a game of golf at a local country club, while Ryan Lowe leads the others to a kayaking and watersports session. It is bucketing it down outside, so you are getting wet either way. Being no good at either activity, I opt for the water.

First off the bus is the manager. He wants to make the most of our time allocation on the water. “We don’t hang about, lad.”

The players have already been through a gruelling session on the training pitch by the time we hop into the kayaks, but, by Niall Canavan’s GPS calculation, it’s a further five kilometres into the arms and legs on the foggy waters of Loch Lomond by the time the activity is done.

Back on the coach, and the much-louder buzz of chatter suggests that day one was a success. WhatsApp images come through from the golf group, and news follows that Will Aimson was the winner.

At dinner, when we are all reunited, Joe Edwards collars Charlie and begs him not share imagery of his shanked tee-off.

Now, where would the fun be in that?