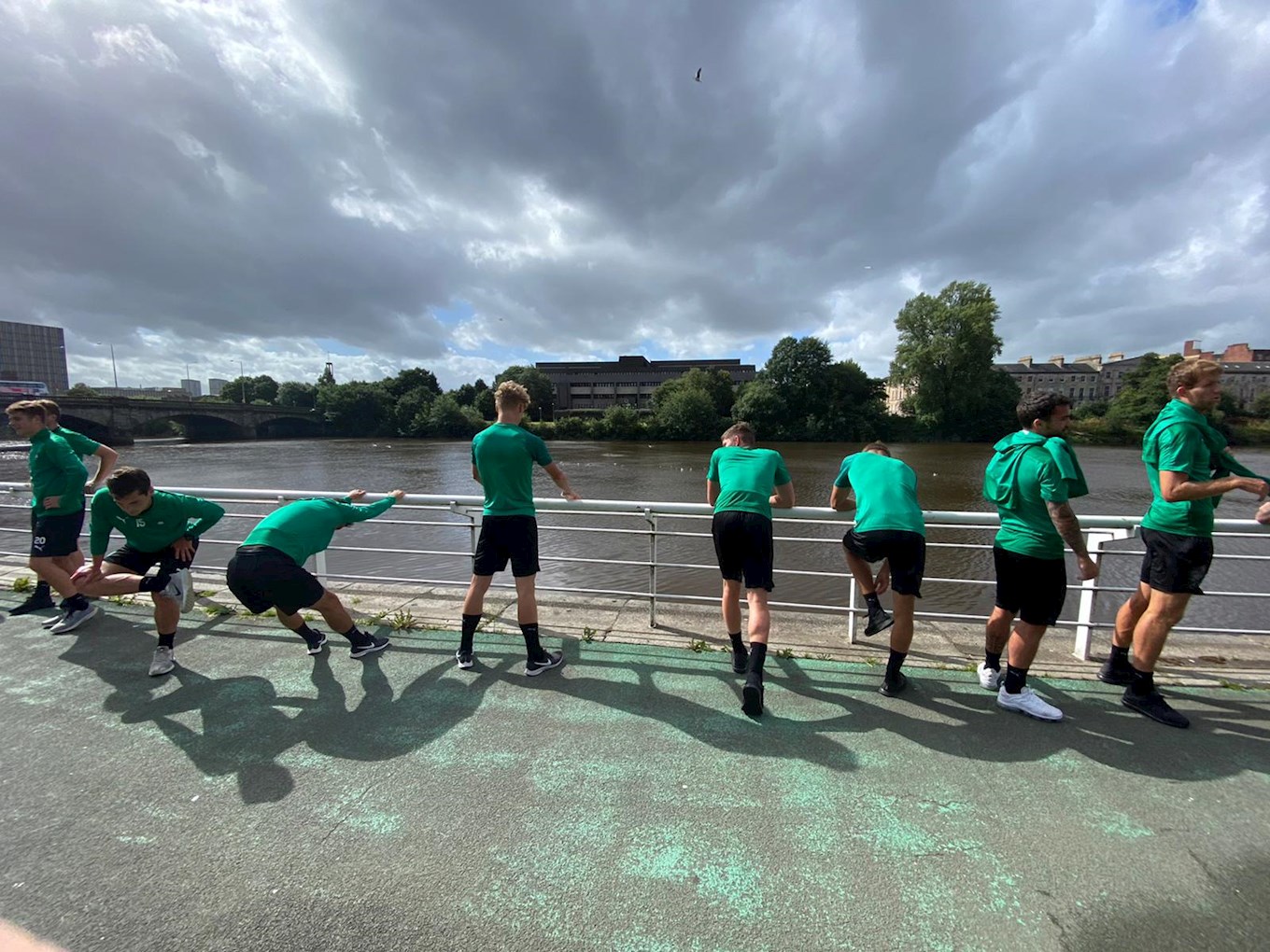 We sent pafc.co.uk's Dan Cole to Scotland with the Argyle squad to document the Greens' unique 20/21 pre-season excursion. Here are his thoughts as the tour draws to a close...

“There’s going to be a togetherness like you’ve never seen.”

That was Ryan Lowe’s message to the Argyle squad a week before the Greens’ 19/20 Sky Bet League Two promotion season kicked-off a little over a year ago.

To set out your stall in such a manner – to require ultimate, 100% buy-in from players, staff, and club officials – is ambitious. It sets a benchmark. It gives your critics, always in plentiful supply in professional football, something to shoot down.

One year on, though, and even the most cynical of naysayers will struggle to argue that Lowe, Steven Schumacher, Neil Dewsnip, Kevin Nancekivell and the rest of the coaching team at Home Park have not delivered upon that mission statement, so far.

We witnessed a culture developing all the way through our promotion season last time out – never losing twice in a row; players running through walls to secure crucial last-minute winners; a strong connection with the loyal Green Army - and I have been privileged enough to see it in action once again this week in Scotland.

It is early days, of course, but the bounce match against Rangers at the famous Glasgow club’s training facilities on Wednesday afternoon evidenced that very same culture in spades. Having fallen two goals behind, struggling to contain a strong Gers side looking to prove a point in front of top brass watching pitch-side, we found a way back into the game, and were unlucky not to take the lead before fading a little at the death.

I will take a leaf from the manager’s book and avoid singling out individuals – but the desire and commitment from the collective to force our way back into the game bodes well for the season ahead. So, too, does the number of youth players – including Academy scholar Brandon Pursall, more on him later – on display against the Scottish heavyweights.

Of course, I understand that this may come across to some as standard PR fluff. After all, I am the club’s ‘standard PR fluff’ officer, but casting my mind back to a year ago – a new manager, a group of players suffering from the scars of a painful relegation, the difference in atmosphere among the group is striking.

Back at the hotel, having assisted the manager with delivering a unique post-match Zoom conference with the local press back home,  I had no choice but to formally cross the threshold into ‘one of us’ territory by means of my initiation song.

Initiation songs, as I have come to learn, are a tradition in professional football circles, whereby a new member of the team is asked to stand up at dinner and perform a song in front of their new teammates. At Argyle, unbeknownst to me, the decision had been taken to extend this ritual to members of non-playing staff, too. Team-building. Togetherness. I feel sick at the prospect.

The nature of our COVID-tested bubble means that we are confined to two floors of the hotel during our down-time, in order not to mix with other guests of the hotel who are not tested. The same applies to excursions into the city of Glasgow – nothing within striking distance of another person, or inside a building that is not exclusively accessed by COVID-tested individuals.

As a result, Charlie Rose, Argyle’s videographer and content man on the trip, and I, had no means of escape, and were subsequently added to the evening's line-up, which included, but was not limited to:

Physiotherapist Dave Galley: Lovely Day, Bill Withers. A solid 7/10 – he has had quite a lot of football clubs in his illustrious career, and you could tell it was not the first time he pulled this one out of his treatment bag.

COVID officer John ‘Covid John’ Spreadbridge: Yellow Submarine, The Beatles. 2/10. He gets the two for turning up. It was barely an attempt at singing, truth told, and he changed the lyrics to ‘Green Submarine’ halfway through.

Frank Nouble: Easy, The Commodores. 7/10. Big Frank can sing, but he seemed keen to get it over and done with.

Luke McCormick: Stand By Me, Ben E. King. 5/10. It was actually very good in the end, but Luke fluffed his lines first time, much to everyone’s amusement, and had to have another go.

Panutche Camará. N/A. I am not sure what the song was, to be honest. Charlie tells me that it was on one of the recent FIFA video games. There were a lot of impressive dance moves involved and he seemed to be enjoying it. It would be unfair to award a grade either way.

Lewis Macleod. A Little Respect, Erasure. 6/10. What Lewis lacked in singing ability (particularly the higher notes), he made up for by generating audience participation.

Darren Way, the Academy coach responsible for mentoring the younger lads on the trip, delivered arguably the stand-out performance of the night, (The Wanderer, Dion. 9.5/10), and the Academy players did not disappoint either. Finley Craske (Shape of You, Ed Sheeran. 8/10) and Charlie Miller (Shotgun, George Ezra. 7/10), preceded Brandon Pursall. Who proved to be a spectacularly difficult act to follow.

Brandon opted to perform Bob Marley’s Three Little Birds. Understandably a little nervous at his big debut, he is quiet for the first few lines – with everyone in the dining hall silently willing him on.

Then, out of nowhere, Brandon, a 16-year-old from St Austell, arrives at the chorus, and carries off an imitation Marley impression – causing the room to erupt with delight. If he can replicate that level of performance and versatility on the pitch, he will surely go far. 9/10.

The same can not necessarily be said of me, or Charlie. Having lost out in a fairly heated discussion over which one of us would get to perform Savage Garden’s 1997 hit, Truly Madly Deeply, I played it safe in a room full of north-westerners by butchering the only Oasis song I knew the lyrics to, Don’t Look Back In Anger, and delivered a disappointing 4/10 performance.

Charlie? Well. He had three attempts at getting through the first verse before being cut off by the evening’s DJ, Dom Telford. He will think twice before scrapping with me over song choices next time. 0/10.

The following morning, before heading back to the airport and casting their attentions to next week's fixtures against Middlesbrough and Forest Green Rovers, the players head out for a seven kilometre run around the hotel.

Fortunately, on this occasion, I was not required to attend.