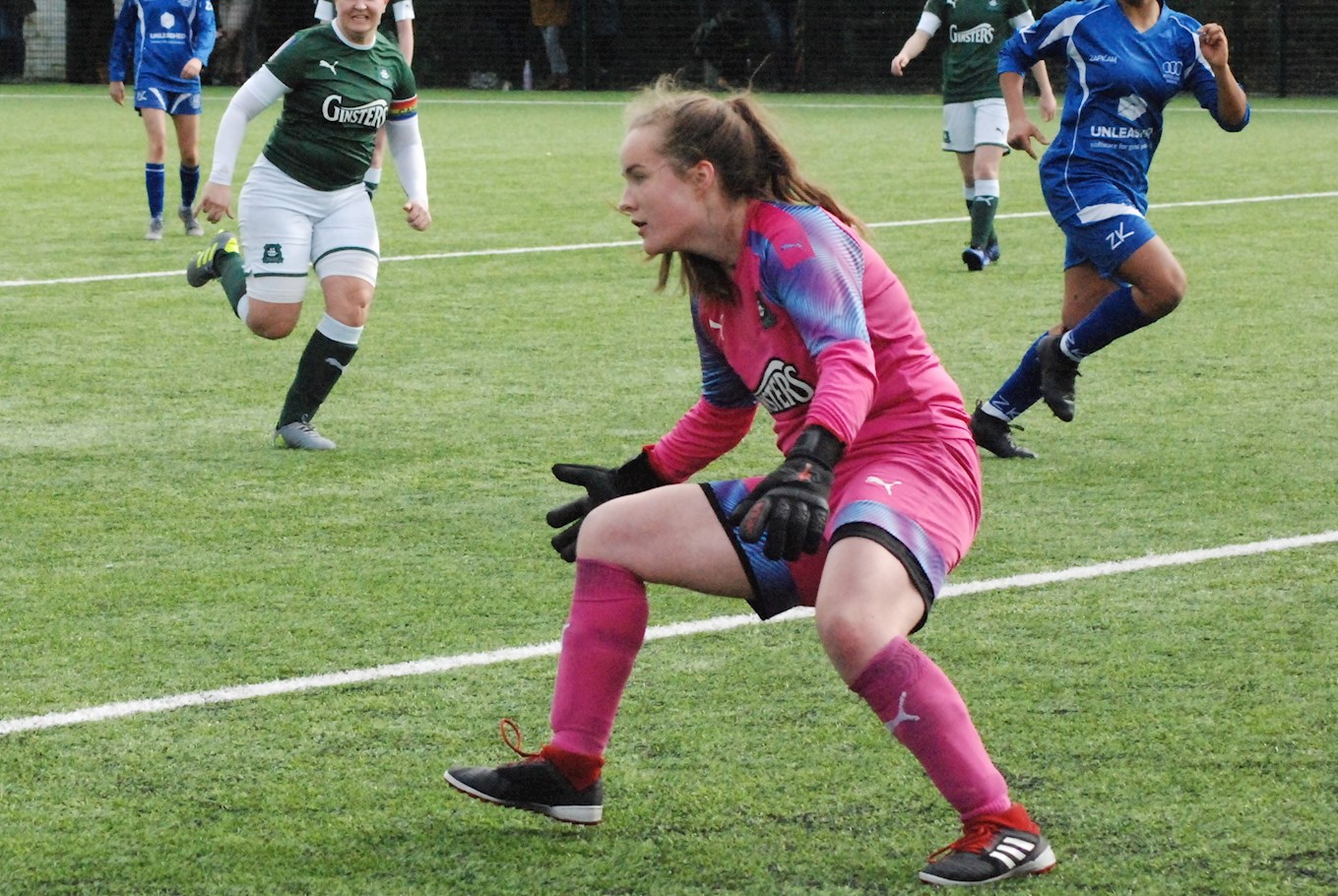 While it has been well-documented that professional footballers have had a difficult time during the lockdown period, it is no different for the players at grass roots level.

This certainly applies to players of the Argyle Ladies development team. Many of the squad are young teenagers who are still at school or college but aspire to play at first-team level. Their enthusiasm in continuing their efforts to keep fit, as well as juggling education, is a testament to their desire.

With their season cut short due to the coronavirus pandemic, we take the opportunity to get to know more about the Pilgrims’ young charges, and how they have been keeping active during their enforced break from football.

It has been a long hard trek for midfielder Immy, whose season was cut short early through a serious injury.

Unfazed, the youngster said: “During lockdown I knew it was important to keep up my levels of fitness.

“To do so I have followed many online fitness videos and set myself workout routines, as well as running 3-5 times a week.

Immy, who is currently studying for her A Levels, suffered is on the recovery from an injury which saw her sidelined for nine months.

“I have used my time during lockdown to work extensively on my body strength. Any free time I’ve had I work on my touch and ball skills in the garden, and have focused on a healthier diet. Whilst doing this I have also been studying for my 'A' levels.”

Maisie, whose impressive form saw her average goal a game last season, said: “I am coping well. I’m still working full-time from home so it’s giving me some structure in the day.

“I have been going for a run every day and do some core and resistance band workouts at least once a day, so I am ready for when the football does start again.

“I think the lock down has given me time to focus on myself which has been nice. I have even had some time to do a bit of baking which is something new for me.”

American full-back Rachel has settled in well at Argyle, with her experience greatly appreciated by the younger players.

She said: “I am coping well. I am a bit of a home body, so I am enjoying the time at home with my family.  I have also been working intense hours working on the UK ventilator programme with Babcock. Walks with my family, working out, and working. I am trying to do runs in accordance with our training regime. I also have added some HITT workouts, skipping rope, and some weights.”

Alongside her fitness, Rachel has been keeping her football skills up to speed by training with her husband, Mike. Rachel continued: “One thing I have learned is that I have started to be more patient with myself. Also, to reorganise my Pinterest, bake and do more things I usually say I want to try but never get around to doing.”

Up and coming goalkeeper Maddie has been busy while in lockdown but, unlike outfield players, goalkeepers face bigger logistical challenges in order to train.

Maddie said: “In lockdown I have been keeping myself entertained by going for runs along the beach in the morning, and then heading over to a local pitch to practice my football skills. I usually end the day by cooking a big meal for my family, which helps them put up with me.”

Nicola is the development side’s top scorer, and, with a trait she shares with many top strikers, she struggles to cope with periods of inactivity.

She said: “I’ve been making sure that I keep busy, which is quite hard for me as I get bored so easy.

“Every morning I’ve been doing Joe Wicks [workout sessions], and, when it’s possible, I’ve been going out and doing different fitness things like working on speed and agility, just trying to keep myself as sharp as possible ready for pre-season.

“Since lock down me and Nelinha Barros have set some challenges, for fitness and different things to try and help keep each other motivated. Our recent challenge has been skipping, I have ruled myself out of this one already as I’ve nearly broken my ankle! It’s been quite nice to try new challenges that I wouldn’t normally get time to do.”

“I'm missing games on a Sunday but keeping myself fit is just as good. I've learnt how to do the around the world skill, and also I've made a few up. Also, I have been doing things I wouldn't usually do, like see all of my family at once.”

Teenager Beth, who ended the season with a stretch of involvement in the first-team, said: “I feel like I have been coping well, however there have been times I’ve gotten frustrated at being stuck inside.

“I have been doing loads of A Level coursework to keep me busy and pass the time away.

“In addition to this, I have started a new workout plan which keeps me fit everyday as well as a new diet. Not only that, but I have been doing the fitness classes with the Argyle team and if I can’t do it that night I’ll catch up the next day.”

Another up and coming young star, wide player Beth has been juggling her education with fitness sessions. She said: “I have been coping well, but have become frustrated sometimes.

“I have been completing college work from 9am until 4pm most days on my laptop at home. The things I am doing to pass the time include baking, fitness circuits, improving football skills I’m not so good at and following a new diet.

“I have been doing are HIIT sessions three to four times a week and, on Thursdays, completing Bow’s [Jackson, first-team defender] fitness sessions.”

Midfielder Maddy is another who has found plenty to do during the lockdown, saying: “I’ve been coping alright, even though it’s strange not being able to go out and play football.

“I’ve been mainly doing college work, but, on the days where I don’t have any work to do, I’ve been getting my sisters into fitness by training them.

“At nights I go out for runs - as I have asthma I don’t want to make contact with anyone [because of the virus]. I’ve been doing it with my dad as I’m helping him with couch to 5K.”

Rosie is the youngest of the team who made her first team debut against Hounslow, which unfortunately will be expunged from the record books as a result of the season’s cancellation.

Rosie said: “I’ve been coping OK. It’s been really hard without playing football as a team! I really miss training, the team and matches. To pass the time away I have been doing online fitness classes via the Nike app and I’ve been practising some new football skills and beating my keepie-uppie record, which now stands at 2357.

“I have been setting up training sessions in the garden every day and also playing football matches with my brothers. I’ve been going on a four-mile run every morning and then doing some workouts at home.”

The development squad’s experienced captain said: “This lockdown has so far been a roller coaster.

“I’m currently furloughed from my job at Tenpin and therefore became a full-time parent/teacher. I have the utmost respect for nurseries and schools.

“Teachers are saints and deserve so much more praise and acknowledgement for what they do.

“It hasn’t been easy to change habits to accommodate this pandemic but it’s starting to become the ‘norm’, which is scary to comprehend. I’ve been doing the odd food delivery for vulnerable family members but was also able to help a fellow football player’s family. She plays for Swindon but her family live in Plymouth. So she reached out on social media and I was able to offer my help.”