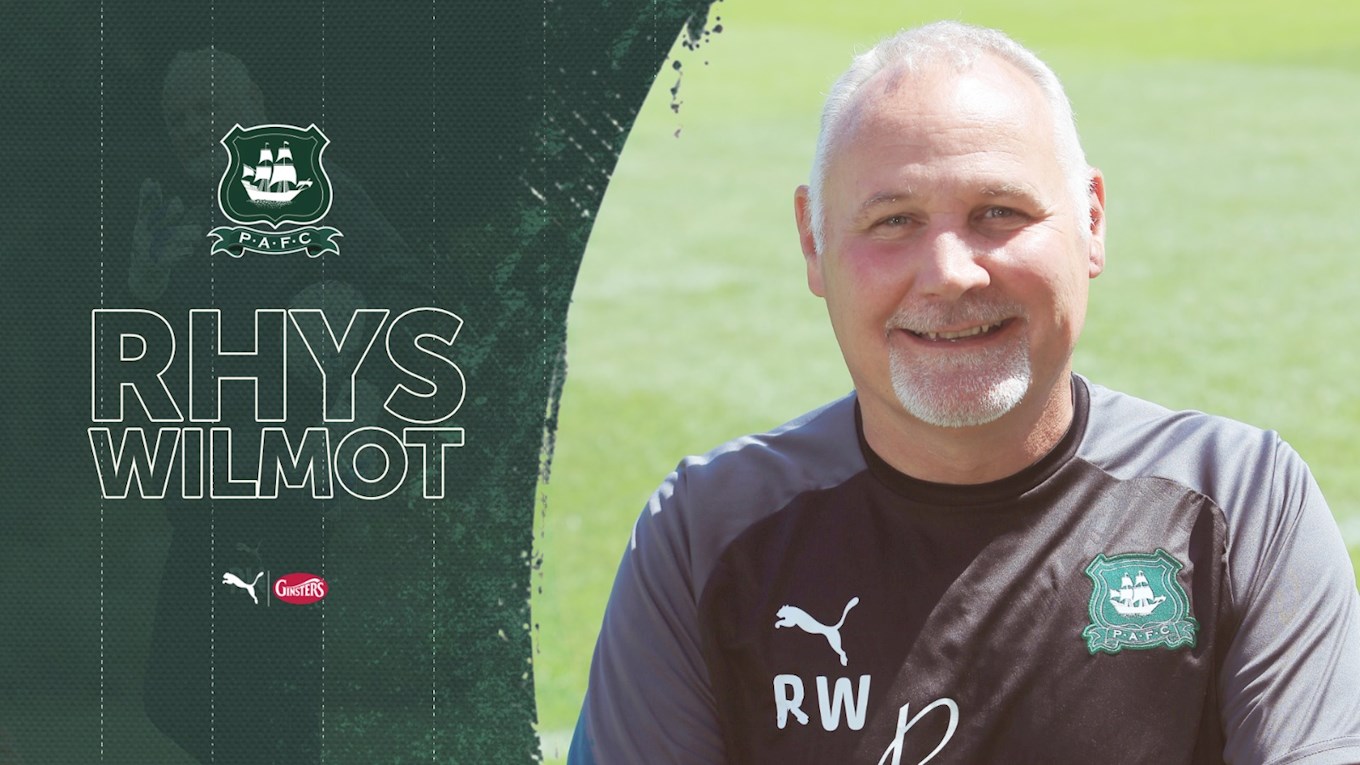 Over 30 years since making his first appearance in Green, Argyle goalkeeper-turned-coach Rhys Wilmot is stepping away from first-team action at Home Park.

Having previously balanced his senior side responsibilities with Academy work, the adopted Devonian is moving into the youth set-up full-time, with Darren Behcet stepping into his rather sizeable - speaking both literally and metaphorically - shoes.

Long-standing knee issues, exacerbated by a hectic schedule and lots of motorway travelling, had been gradually taking their toll on Rhys, who opted to stay on for one last campaign with Ryan Lowe’s new-look coaching team ahead of the 19/20 campaign – a season that culminated in promotion.

Rhys said: “It was my first season with the new Gaffer [Ryan Lowe] and Neil [Dewsnip, director of football] and the new set-up. I went into that season having had the conversation with the Gaffer – I wanted to continue on, and he said ‘no problem, of course you can.’

“That was brilliant. OK, there was a little bit of trepidation with a new set-up, new guys, new manager – as is always the case when you’re stepping into the unknown. Having worked with them within a couple of weeks I knew it was a great decision to stay on in there and carry on.

“Little did I know that my knees were going to deteriorate as badly as they did over the season, and they got worse over the back-end. Things became a little bit of a struggle for me. I think I was doing my job properly in terms of preparation, advice, and coaching, but I was struggling with my physicality.”

Under Rhys’ tutelage, loanee goalkeeper Alex Palmer amassed more clean sheets than any other goalkeeper in the division as the Greens won promotion. For goalkeeping coaches considering their future, that seems as good a time as any to bow out.

“I had that conversation with Neil towards the end of last season, and there had been discussions about the goalkeeping role going full-time in the Academy,” Rhys said.

“The work in the Academy has been so important to me, and it still is, so when I knew it was going to become a full-time role, I went ‘wow, that’s me all over’. I’ve been lucky in that respect, going to another full-time role within the club and with a staff that I like working with.”

Initially joining Argyle on a three-month loan deal from First Division side Arsenal in 1989, Rhys had amassed 150 competitive appearances for the Greens by the time he departed Home Park in 1992.

Reflecting on joining the Pilgrims for the first time all those years ago, Rhys said: “I knew nobody at all at the football club. Alan [Miller, Arsenal teammate who was on loan at Home Park earlier in the season] had told me some stories of his time at the club, and how he’d enjoyed it. I was the typical naïve footballer, 26 years of age, and I didn’t realise how far Plymouth was from London!

“I met the manager at the time, Ken Brown, who, for me, was an absolute gentleman and a legend. He welcomed me into the club straight away, so did the players, they looked after me, found me somewhere nice to live, and the last few months of the season went swimmingly – I played 17 games and really enjoyed it.”

Rhys’ time at Home Park as a player lasted three-and-a-half years, with the Greens battling it out in the equivalent of the Championship. While much has changed between then and now, the current crop of Pilgrims are back playing a style of football that Rhys’ Argyle teammates would have been proud of.

He said: “The gates weren’t brilliant, they weren’t as they are today, and yet we played such a good brand of football – in my first season especially.

“I remember playing a game at Leeds, where Howard Wilkinson was the manager. We got beat 2-1, but afterwards he said we were the best footballing side in the division by far. We just struggled on the road, but our home form kept us in the division.”

Rhys’ time at Home Park was cut short by the arrival of former England goalkeeper Peter Shilton as player-manager. However, his affection for the club and the city of Plymouth did not dwindle, and he returned to the region a few years later.

“I was thinking ‘how do I get back to the South West’, really, and Torquay was my route back down. I was struggling at Crystal Palace, had a back operation, and the manager Dave Bassett, who was brilliant with me, told me I could get a free transfer.

“As soon as I signed for Torquay [in 1996], I moved back into Plymouth. It was always my intention to come back to the area once I finished playing. I guess it’s the people, really. I always seem to get on well with the people in Plymouth. It did help that I had a good three-and-a-half years here.

“Those good memories stay with you, and you want to go back to places that you have good times at. I was quite happy and excited about coming back down to continue those good times.”

Having retired as a player in 1997, Rhys began a second career with the Devon and Cornwall police, and remained in the city. It was not until the mid-noughties, though, that he rekindled his love affair with Argyle – owing to a phone-call from former teammate and friend, Alan Rogers.

“I got a phone-call from Alan, who I kept in touch with after playing. He had a little hotel in Plymouth, which I stayed at, and we became really good friends,” Rhys explained.

“He phoned me up and told me that Gordon Bennett and Mike Pejic required a goalkeeping coach, and he put my name forward. I told him I hadn’t done any coaching for I don’t know how many years!

“I gave Gordon a ring and he said just pop in for a week, and that was the start of it. I liked it, Mike Pejic was brilliant with me, and I stayed in the Academy ever since.”

A logistically challenging period followed, with Rhys balancing shift work with the police and his Academy responsibilities, before further complicating his schedule by taking on first-team duties in the post-administration era at the Theatre of Greens.

He said: “My first association with first-team coaching was after administration, really, with Carl Fletcher and Nance [first-team coach Kevin Nancekivell]. It got a little bit tougher as I got through the stages when I was working in the Academy, first-team, and the police – I was effectively working three jobs at one stage.”

With the club largely recovered from the scars of administration, Rhys left the police in 2016, turning full-time as the club’s goalkeeping coach.

He said: “I’d done nearly 18 years. I had come to a stage in my life where I wanted to do the coaching more than I did anything else. I’d made my mind up, really.”

In his time at Argyle, Rhys has overseen a number of young hopefuls, including his protégé Mike Cooper, who has been an ever-present in the fledging 20/21 Sky Bet League One campaign. Rhys first worked with the highly-rated youngster as an eight-year-old, and he admits it is a bittersweet feeling to step down just as Mike begins to blossom.

Rhys said: “There is that tinge of disappointment, but it’s overshadowed by the fact that he’s made it. Not many coaches can turn around and say they’ve seen a full cycle in a player’s development. I’ve been fortunate enough to have Mike since he was eight or nine years of age in the Academy.

“You look back at it – I was in my infancy as a coach, and we’ve made that journey together. It’s great that I’ve been able to see it and be involved in every stage of his career so far. I’m disappointed that I won’t be with him every week, because we’ve been together on a daily basis for 12 years, but I am very proud of him.”

Rhys is left in no doubt, though, that his successor is the right fit at Argyle, and will continue to provide excellent coaching for the Pilgrims’ three senior stoppers – Cooper, Jack Ruddy, and Luke McCormick.

He said: “The coaching team is a very close-knit group, and you need the right mix. I think Darren is that – young, enthusiastic, a good coach. I was more than happy to hang on until they’ve found that right man.

For Rhys, his focus is now firmly on the future, Argyle’s future, to be precise, as his years of experience and expertise are invested into the Greens’ Academy.

He said: “I’d like to thank the management team, the Gaffer, Schuey [assistant manager Steven Schumacher], Neil [Dewsnip, director of football] for keeping me at the club when they brought the new regime in.

“I’m in the Academy on a daily basis, and always on the end of the phone. I’ll be able to help out, if necessary, but it’s Darren’s bag now.

“I’m not going to step on fingers and toes – I’ve got my work cut out, I’ve got to find the next Mike Cooper.”