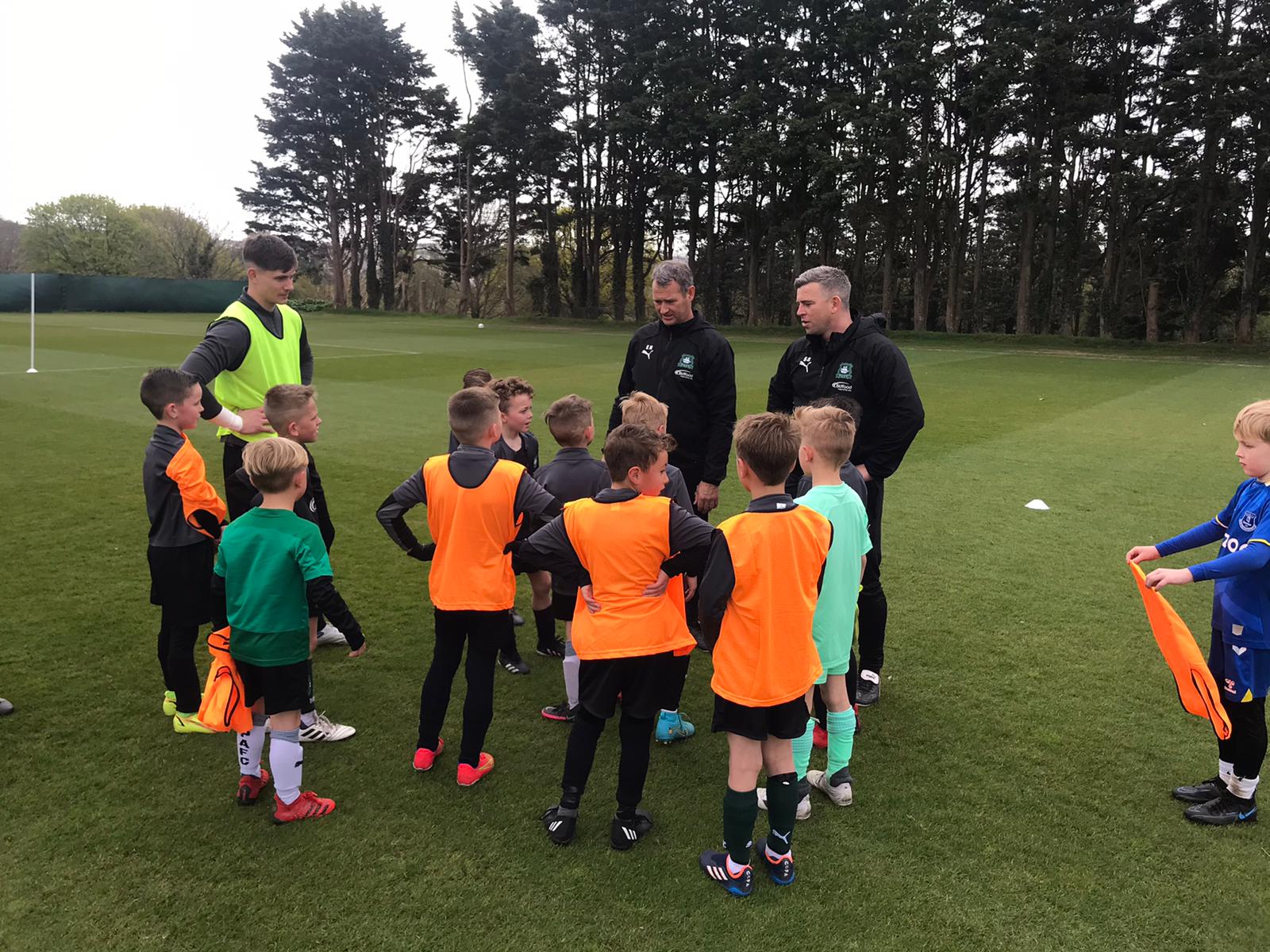 An Academy Day to remember

Harper's Park opened its gates to ten under-8 Academy youngsters for an incredible opportunity to train with the first team.

Joined by family members and friends at Argyle’s training ground, the young stars were put through their paces in a series of drills put on by first team coaching staff.

Manager Steven Schumacher, First Team Coach Kevin Nancekivell and Academy Manager Phil Stokes were all on hand to offer advice and encouragement as the young lads embarked on a day they will never forget.

Kevin Nancekivell has worked with the Academy at Argyle for a number of years and now is in a role with the first team that helps bridge the gap from junior football to senior football.

He is always passionate about seeing young talent coming through and feels like days like this can only improve the success rate of the Academy.

He said, “It’s great to see the kids mixing in with the senior pros.  The senior lads love it as well and it’s been a really good morning.

“We want to see our best young boys from Devon and Cornwall come to Argyle, the linkage between the football club and the region is really, really important

“To come and train with Danny Mayor, Mike Cooper, all the first team boys and then go and sign a contract is definitely going to be a day they will always remember.”

As if the day couldn’t get more exciting, once they had finished their training session, members of the first team squad joined the youngsters for a series of small sided games.

The likes of Niall Ennis, Danny Mayor, Mike Cooper and Jordan Houghton became teammates for the morning as the new Academy recruits got a taste of what professional football is really like.

Jordan, who came through the ranks at Chelsea, was impressed with the talent he was up against.

He said, “There are some pretty good players out there as well, I don’t think I was this good when I was eight or nine years old.

“I remember doing the same thing at Chelsea, I joined the academy at a similar age and hopefully some of these boys can go on and achieve something similar to me.

“I would imagine a lot of them would come to the games and watch us and so to come and play with us I am sure they have loved it.”

Mike Cooper, who was a huge hit with the young players also vividly remembers coming along and training with the pros when he was a kid.

“I remember when I was younger coming in and doing this.

“It’s weird when you think about it, it doesn’t feel like that long ago but it’s such a good thing to do, to be all inclusive like this.”

Later on in the day, each player would be invited into the manager’s office to sign paperwork for their first contract at Argyle.

Having excelled in the club’s pre-Academy, ten players put pen to paper for the first time and in doing so beginning their footballing journey.

“It is the very start of the journey, the end goal now is to get into the first team and I am sure all of those kids will have dreams of doing just that.” Steven said after posing for photos and seeing the ten lads sign their deals.

“It’s a hard journey, it’s a long road but days like today can show them just what being a professional footballer is all about.

“There is a feel good factor of course, but we know how important it is to get the best talent from the region to play their football at Plymouth Argyle.

“For the parents to see how much of a fuss we make and care about all of the boys and to show them that this is the best Academy to go to is important.”

As well as being an, obviously, exciting day, it also is further evidence that Argyle is a club that cares about their young players.

Whether you are eight years old, or 33, once you put pen to paper, you are in the Argyle family.

Director of Football Neil Dewsnip is a firm believer in this and knows a strong youth setup is central to the project of building a long and successful relationship between the region, Argyle's Academy and eventually, the first team.

He said, “For clubs like Argyle, the youth development is imperative.

“The Academy is the heartbeat of the football club as it builds an identity and resonates with the fanbase.

“I am sure some of the lads who came along today will look up to the players in the first team and think, ‘I want to be like that.’ I don’t know who, but I know it will happen.

“We want to be renowned for the production of young local talent, it is a very important arm to our football club.”

These youngsters will be hoping that they can follow in the footsteps of their heroes.

They will be dreaming of training at Harpers Park everyday and plying their trade across Central Park on the pristine surface of the Theatre of Greens.

For some, that has already become a reality and Argyle has benefited from some incredible work by the academy in recent years.

This season alone has seen two of their graduates go past the 100 appearance mark in Luke Jephcott and Mike Cooper. Adam Randell and Ryan Law have become important members of the first team and the likes of Freddie Issaka, Will Jenkins-Davies and Carlo Garside have all made their Pilgrims debut.

Academy Manager Phil Stokes has overseen a lot of that good work and feels that days like today and the work that is done in the early years is a major factor on the success of producing players.

He said, “Over the last three years, there is a genuine pathway for Academy graduates to make it into the first team, you can see that.

“The players, parents, us as staff put in the work to make things like that achievable and I think seeing the way the manager, the coaches and players have interacted with everyone today, shows just how much the Academy does mean to us at Argyle.

“Football at this age is all about having fun and learning whilst doing so and that is what we try to do all the way through the Academy at Argyle.

“You can see the excitement in the kids faces and that’s what days like today are about.”

The day may have been about fun, but it was also imperative in continuing the good work the Academy has done to show prospective parents, children and families that Argyle is the best place in the region to learn you footballing trade.

If you can do that and begin your journey at Argyle and also nutmeg the current manager, then that makes it even better.