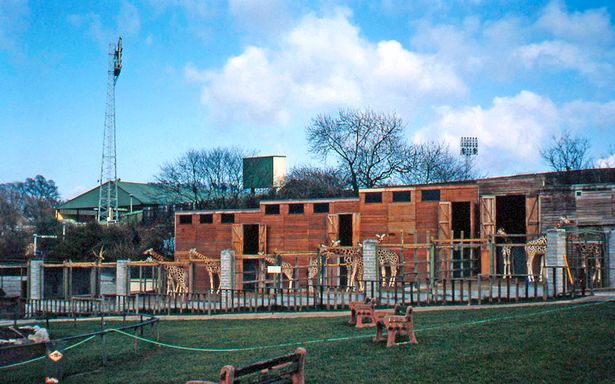 We love our unique history at Argyle, but as well as the famous games and star performers, there are many tales of the unusual. Club ambassador Gordon Sparks will be unearthing the humorous, surprising and behind the scenes tales of years gone by in this fascinating series underlining makes our club special.

Do you remember Home Park when it had a set of neighbours housed immediately behind the Barn Park end of the stadium?

Run by the Chipperfield family, famous for their travelling circus and TV shows, payment of rent of the land was made to Plymouth City Council.

All this leads to the subject of this first article recalling past times at Home Park – animals at football matches.

As opposed to modern stadia, back in the day it was not so uncommon for games to be interrupted by animals wanting a piece of the action. Gaps under turnstiles and spaces under perimeter fences seemed to be an open invitation for dogs, cats and at times other creatures to find their way to the pitch.

It wasn’t that unusual for TV highlight shows ‘Match of the Day’ and ‘The Big Match’ to include such interruptions. One famous incident saw the great Jimmy Greaves get to his knees during the 1962 World Cup match against Brazil to coax a dog that had evaded stewards and other players into his arms.

Unfortunately for Greaves, as he carried the dog from the pitch, he ended up with a wet shirt.

One feature of Plymouth Zoo was the number of rabbits who made their home there. But being so close to Home Park, it wasn’t a rare sight to suddenly see a rabbit or two running onto the pitch. A number of squirrels also found the hallowed turf a great place for a run around.

One of the dog-related incidents saw a small terrier run onto the field during a game, leading to the inevitable chase from several players.  Quick as you like, the Devonport End raised a chorus of ‘There’s only one Jack Russell’.

Inside Plymouth Zoo, during games there was one particular area that seemed prone to be an unwitting target for stray shots – the hippo enclosure.

Behind the Barn Park goal at the time was an open terrace. In line with the goal at the rear of the terrace was a large public address speaker, with the wooden slats covering it painted for many years in the style of the Argyle shirt of white with a central green band. That very spot later housed the ill-fated scoreboard.

That marked the boundary between the stadium and the zoo and there were many instances of penalty kicks taking balls over the crossbar, sailing past or over the speaker and into the hippos’ abode.

But one incident in particular remains strong in my memory, and it involves John Delve.

Between stints with Queen’s Park Rangers and Exeter City, the combative midfielder with flowing blond hair spent four seasons with Argyle. But in his 151 appearances for the Pilgrims he wasn’t known for his scoring prowess - with just six goals to his name.

But in one particular match, his eyes lit up around 20 yards from the target and he let fly.

The opposing goalkeeper immediately knew he was to be untroubled as the ball flew wayward of the target and cleared the Barn Park terrace.

A couple of seconds later, a huge roar could be heard from within the confines of the zoo, presumably from a shocked hippo.

I saw John a few years ago and mentioned the incident to him. With a smile, he replied that he didn’t personally remember the shot, but a number of people had mentioned it to him, so it must have been true.

There have been many occasions when fans have taken their pets to games. Reserve team games in the Football Combination League would often see fans stood on the terraces with their dogs. But how about the family that took their cat, which didn’t see the match?

For the Emirates FA Cup tie at Anfield five years ago, the Braund family didn’t want to leave Lily the cat at home alone as she was poorly and needed regular injections. So, in their hired minibus, room was available for Lily’s cat box.

During the match, with Lily remaining in the minibus as the family cheered on the Greens to their famous draw, a friendly car park steward agreed to keep a regular eye on Lily until the family’s return.

In more recent times, the only regular non-human activity inside Home Park can be spotted after games when fans had gone home. The infamous Plymouth seagulls seem to know when the action had finished and there could be found dropped portions of pasties and other delights to be devoured.