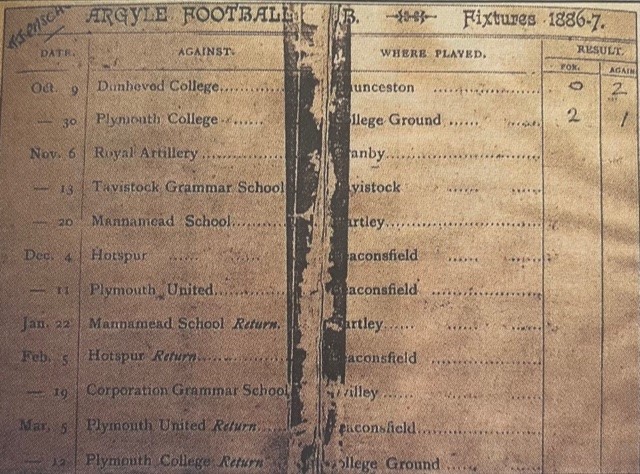 We love our unique history at Argyle, but as well as the famous games and star performers, there are many tales of the unusual. Club ambassador Gordon Sparks will be unearthing the humorous, surprising and behind the scenes tales of years gone by in this fascinating series underlining what makes our club special.

Communication between Plymouth Argyle and its supporters has changed immensely over the generations.

Today, an instant supply of news and features (just like this one) can be released via the website, social media and other media outlets.

But when printed means were the only way of providing information, it may not have been appreciated at the time how future generations would treasure those pieces of club history.

One simple way of providing fans with a diary of events has been the fixture card, which is still printed in this modern era. Look out for the 22/23 version coming soon!

That same foresight was used by the custodians of the club in Argyle’s very first season, presumably the brainchild of secretary of the team, Walter F. Siddall, who undertook his duty from his home at Bedford Park, close to what is now North Hill.

Other officials proudly named on the front of the fixture card were the captain, Howard Grose, his vice-captain Alfred Dyer, honorary treasurer George Vaughan, and committee members Charles Phillips and Alfred Shilston.

Five weeks before the first game, the formation of the Argyle Football Club was officially announced in the Western Daily Press newspaper, which was printed in Frankfort Street just days before a suggestion was carried unanimously that the name Plymouth Argyle be adopted.

But there was a problem. Plymouth Argyle did not have a home ground so looked to play its first fixtures on opponents’ pitches.

Open space, which at the time in Plymouth was a rarity, was used at Freedom Fields for training until such time permission was granted for training and matches at Mount Gould.

The first challenge for the new club was provided by Launceston-based Dunheved College on Saturday, 9 October, 1886.

In very poor weather the team travelled by the only means available, the broad gauge Great Western Railway line.

But what was the result? For those who didn’t witness the game, it depended upon which newspaper was read.

In a report submitted by the college captain to the Launceston Weekly News, the home side won by four goals to one. But the account written by Mr Siddall to the Western Morning News had Plymouth Argyle losing by a score of 2-0.

During this early period for the game, it was quite common for results to be anything but clear cut.

Goal nets had yet to be invented and the ‘crossbar’ was nothing more than tape attached to the top of each goal post.

To confuse matters further, referees did not give the indication when goals were scored.  That was the responsibility of two umpires supplied from each team, who would raise a flag when they assumed a goal had been scored.

The fixture card owned by Howard Grose, as can be seen in the image on this page, clearly shows his entry that he went with the 2-0 defeat.

He was instrumental in setting up the historic opening game, having just left Dunheved College and moved to Plymouth to study architecture and engineering.

A total of 17 matches were eventually played in that season, not all of them arranged at the time the fixture card had been printed. Argyle recorded seven wins and two draws and the popularity of the fledgling club was certainly evident as a second eleven was formed later in the season.

The fixture cards became brighter over the years as printing methods improved, and in more recent times have carried the logos of club sponsors or advertisers to help offset the costs.

The original four page design has often been extended to fold-over versions to accommodate bigger fixture lists and, when applicable, the games played by a competitive second team – for instance during the days of the Football Combination League.

But they have all been designed with the same aim. A size convenient enough to slip inside a wallet for fans to take home and insert the dates into diaries.

Small in appearance, but like many items of ephemera, fixture cards of a certain age can be worth tidy sums to collectors as can be witnessed at memorabilia fairs and certain online market places.

Whatever items you may have, from programmes to handbooks, they also serve as reminders of the past and create your own pieces of football history.

That fixture card of 1886 certainly illustrates just one foresight of the first pioneers of Plymouth Argyle.