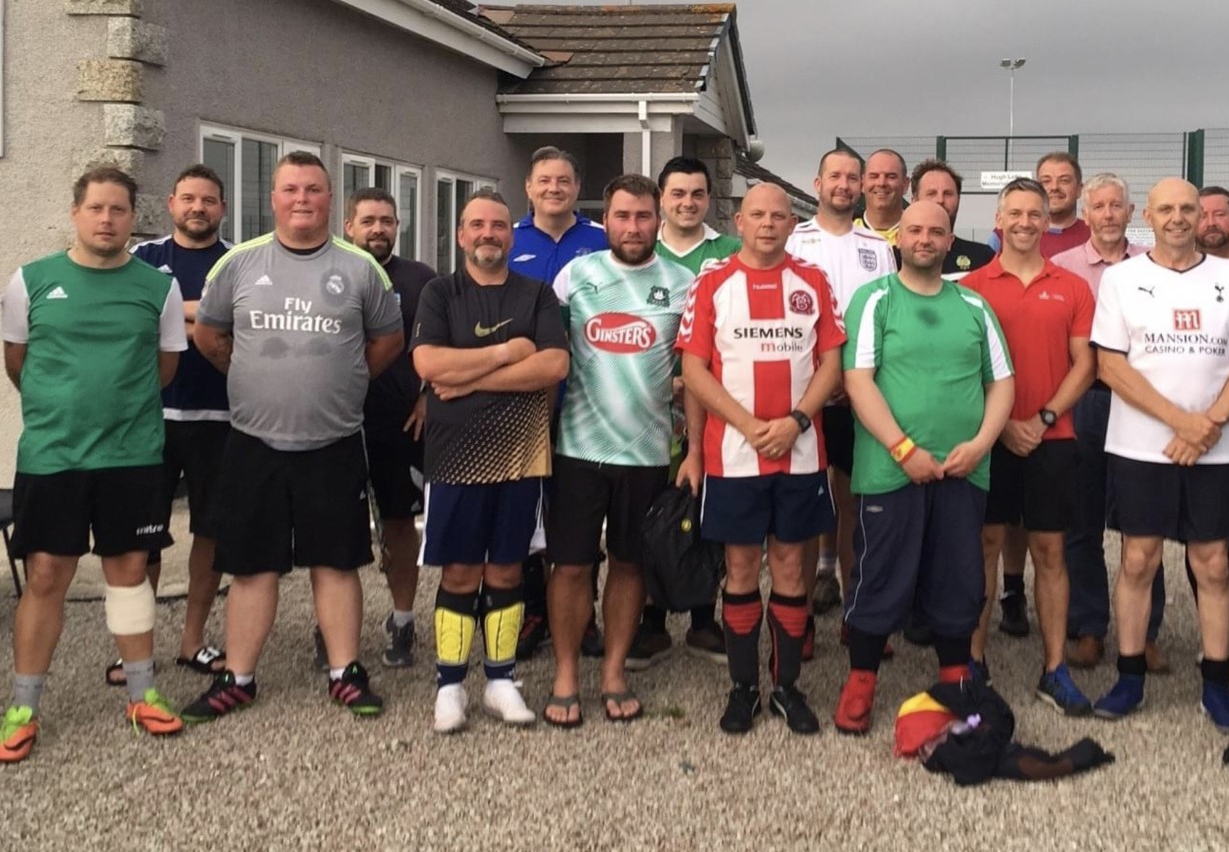 Around 180 men across Cornwall are losing weight and getting fit thanks to an Argyle Community Trust programme that uses football to promote a healthy lifestyle.

Argyle FIT (which stands for ‘Fans In Training’) is a joint initiative between the Cornwall Council-backed ‘Healthy Cornwall’ scheme and Argyle Community Trust. The programme is aimed at men with a BMI (Body Mass Index) over 28 who want to become more active and shed some pounds in the process.

The scheme got under way in earnest last September and has now expanded to cover five venues across Cornwall, from St Austell, Bodmin and Launceston in the east, to Penzance and Camborne in the west.

One evening a week, FIT participants weigh in and then receive half an hour of advice on healthy living. After that, it’s outside for a warm up and an hour of 7-a-side football between the different teams at each venue. But it’s not all over at the final whistle each night. As an added incentive, teams are awarded extra goals depending on the amount of weight lost each week by their members, which could turn a loss or a draw on the pitch into a win.

Gary Stevens, Argyle FIT Coordinator and Community Coach in West Cornwall for Plymouth Argyle Community Trust, says: “For Argyle FIT, the football is a by-product. It’s there to encourage people to keep moving. People weigh in, and the numbers are uploaded to a secure database, allowing us to track the differences in weight from week to week. Players that lose more than a pound earn a bonus goal for the team. Weight loss is our real focus.”

Gary has been running the west Cornwall sessions for the last nine months and explains how it all got started.

“The initiative came from Cornwall Council, who provide 100% of the funding, meaning the programme is free to participants. Recognising the power of the Argyle brand to attract players, the practical delivery of the programme has been put in the hands of the Argyle Community Trust. We book the venues, liaise with players and find the equipment.

"Since last September when the funding came in, it’s exploded. We now have five venues with the potential to add another two.”

The programme has clearly struck a chord in Cornwall. Gary says that there are plenty of participants who have been there from the beginning.

“At Camborne, for example, 25-30 guys have been with us since September. People do keep coming – it’s very consistent, and we have people aged from 18 to almost 70. There are plenty of success stories as well. One guy has lost 40 pounds since Christmas and that’s not an isolated example.”

As for the ‘Fans’ part of ‘FIT’, Gary says that quite a few of the participants do go to Home Park. He’s bumped into plenty on the train up to Plymouth on match days, and many of them have children involved with the club's Academy and pre-Academy programmes.

“The programme is definitely creating more Argyle fans”, says Gary, but it's the impact on people's overall wellbeing that is the core of the programme. “Argyle FIT not only helps people’s physical fitness and lifestyles, it’s also good for their social interactions, especially after the last two years where everyone has been isolated due to Covid.

"A lot of guys look forward to Tuesday nights not just for the football, but also to interact with new friends. The social element is big, and that’s one reason me and the staff enjoy it so much.”

All of which highlights the importance that Argyle FIT plays in promoting mental, as well as physical, wellbeing. Gary sums it up like this: “It’s not easy for men to talk about weight issues. On a Tuesday night they can go in and say they’ve had a bad week, maybe put on a bit of weight. Getting them to open up about what they’ve been doing ticks so many boxes - it’s not just about losing so many pounds in a month. The positive impact on mental health is massive. That’s the bit you don’t really see if you just look at data.”

For more information on Argyle FIT, visit the Argyle Community Trust website. If you are interested in signing up for these free programmes, email matt.coates@pafc.co.uk or gary.stevens@pafc.co.uk.