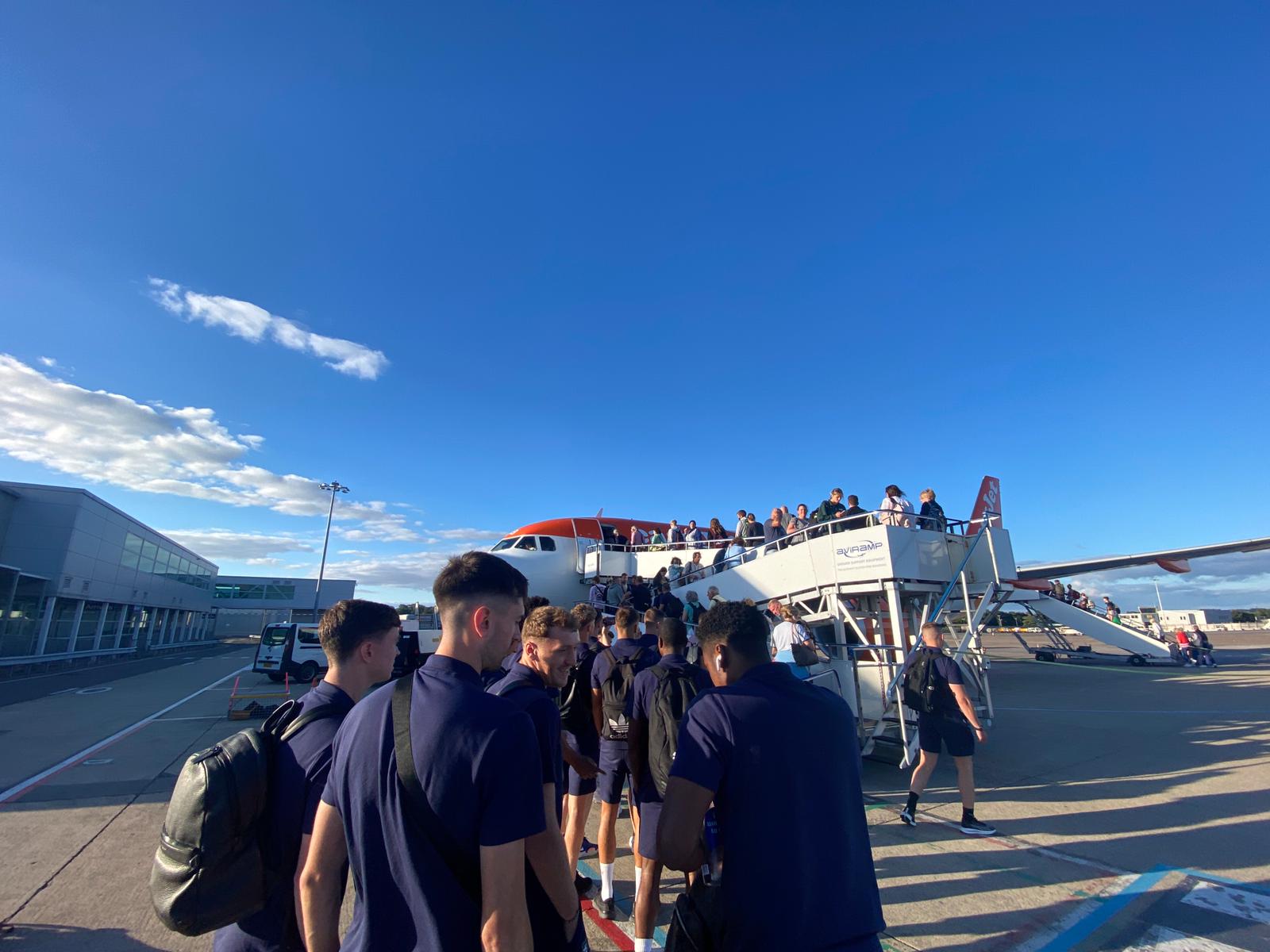 Argyle in Spain | Day One Blog

Another pre-season trip abroad for the Greens means another pre-season blog. Assuming the duties this summer in Marbella is Argyle TV’s Charlie Price, whose first overseas trip with the team did not get off to the best of starts.

A trip to Spain, for work, to document the lads on their warm weather training camp. Okay then.

On the face of things an ideal week, and from the jealousy in the voices of the rest of the staff in the office, Charlie Rose and I had hit the jackpot - how wrong could I be? At least for the first 12 hours or so…

I should have known that something would complicate things, if you take the fact that our original flight on the Sunday had been cancelled aside, the day itself was going too smoothly.

Granted, this is just from my side, but from the moment I arrived at the club, got those little admin bits sorted, to the moment we whizzed through security at Bristol Airport, not a hitch. Mainly thanks to the incredible work and organisation of Assistant Club Secretary Ellen Shine, the gaffer, Steven Schumacher, and the rest of the football staff.

It was nice, calm - even fun - sat in the departure lounge, nothing there to indicate what would happen just a few hours later.

Apart from the odd jibe from Adam Randell about the choice of swimwear I had packed - Speedos if you’re wondering - I was having a great time.

When he finally managed to get over the fact that Speedos produced swimming shorts as well as the tight budgie smugglers they’re renowned for, we grabbed a coffee and flicked through our summer holiday pictures. After a slight delay to the departure time, we were on the plane and leaving the sunny South West for an even sunnier south of Spain.

Even the flight itself, all two hours of it, had a very calm feel about it.

The lads were chatting away amongst themselves, every now and again a member of the non-football club passenger variety would ask one of us, if we had a game planned out there, or what we were going to be doing.

Air Pods were in, sweets were chewed, Pringles consumed and books read. Callum Burton was talking me and Elliot Turner through his post-season trip with Hull City. They went to Kenya to play an exhibition game against the Kenyan Premier League winners. Sounds strange but interesting - I’m not sure what was more intimidating for the players, though, arriving at a packed out 70,000 capacity stadium in Nairobi, or the lion they saw on safari.

Anyway, as I have said, the trip was going well - until we touched down at Malaga Airport.

We disembarked, no problem. Everyone had their hand luggage.

Even the sometimes-stressful security checks ran strangely smoothly. Oh, and I got to hear a little bit of the gaffer’s Spanish too.

Three potential problems safely negotiated, but then it began.

We reached the COVID vaccination checks. I desperately dive for my phone and try to open my NHS app. It needs an update. Of course, it does. Just when I am at the front of a rather large queue.

Sweat begins to drop down my brow, I have three per cent battery left in my phone and the update fells like it’s taking forever.

Luckily, I have a mate, Darren Behcet, who is also wishing his phone would hurry up and get his QR code loaded.

“Yes, got mine Chaz, I’ll wait for you on the other side.”

I stand there, eyes fixed on my screen, just wating for that spinning wheel of death to disappear. Two minutes, five minutes, 10 minutes.

“Chaz, the lads have gone round to the bag drop, I’ll tell them you’re on your way.” The reassuring, booming cockney voice of our goalie coach, reassuring me that all will be okay, but he was fed up waiting, and who can blame him?

The app had still not downloaded, about 20 people had come up behind me, got their vaccination status ready and passed through.

One per cent battery.

Finally, a medic took pity on me and could clearly see I was trying my hardest to stare my phone into doing something and allowed me through.

Panic over, or maybe not.

By the time I had joined the rest of the team, the shrill of the siren which signals that the baggage reclaim is about to start filled the air.

Matt Butcher looked up, winked at me and said, “almost there mate, been a long old day.” Yes, it had, Butch, but mine was about to get longer.

The bags came around the carousel. Ryan Hardie’s tiramisu coloured case was first out of the blocks, the gaffer’s baby blue one followed closely behind.

Big black kit bags followed and, before you knew it, everything was off.

“You got yours there Charl, yeah?” the gaffer nodding in my direction.

Great, where was my bag? The carousel had stopped, there were two bags left on it, but neither were mine.

“We’ll go and get on the coach and just tell the driver that you’re waiting for your bag mate, yeah?” The gaffer leads the players and staff away.

The two Neils, Dewsnip [Director of Football] and Lunnon [Kit Manager], and I, wait by the stationary baggage conveyor looking lost.

It’s already gone midnight and the players are supposed to be training at 10 the next morning. I march down the terminal, looking for someone to speak to, but inevitably there is no one there.

My phone rings, it’s the gaffer.

“Okay, do you want to send one of the Neils back and then you and the other get a taxi to the hotel later? We just want to get the lads to sleep.”

A fair point, it had been a long day and I wasn’t the most important part.

Dewsnip wished us luck and left for the coach.

Ten, maybe 15 minutes passed and there was no sign of the bag, or any staff.

Neil tried calling EasyJet but was met with an automated Spanish message on the other side. It might have been helpful, but neither of us could understand it.

With my phone hanging on for dear life, with one percent of battery left, I filled in the lost baggage form on the EasyJet website and resigned myself to a week of wearing the same pants, socks and top.

It was getting close to 12:30am when the siren started up again - I wonder. Would my bag magically be coming through with the London Gatwick flight which had just landed?

Surely not. I was tired, delirious.

Boom, there it was. A thing of beauty. An aubergine, hard shell travel case came out first. Out of the blocks like an Olympic sprinter, it was here.

I ran to grab it; Neil hailed a taxi, and we made the 45-minute journey to the hotel in Marbella safe in the knowledge that I would have some spare clothes.

Not the most ideal of starts to a week away but hey, at least things can only get better.