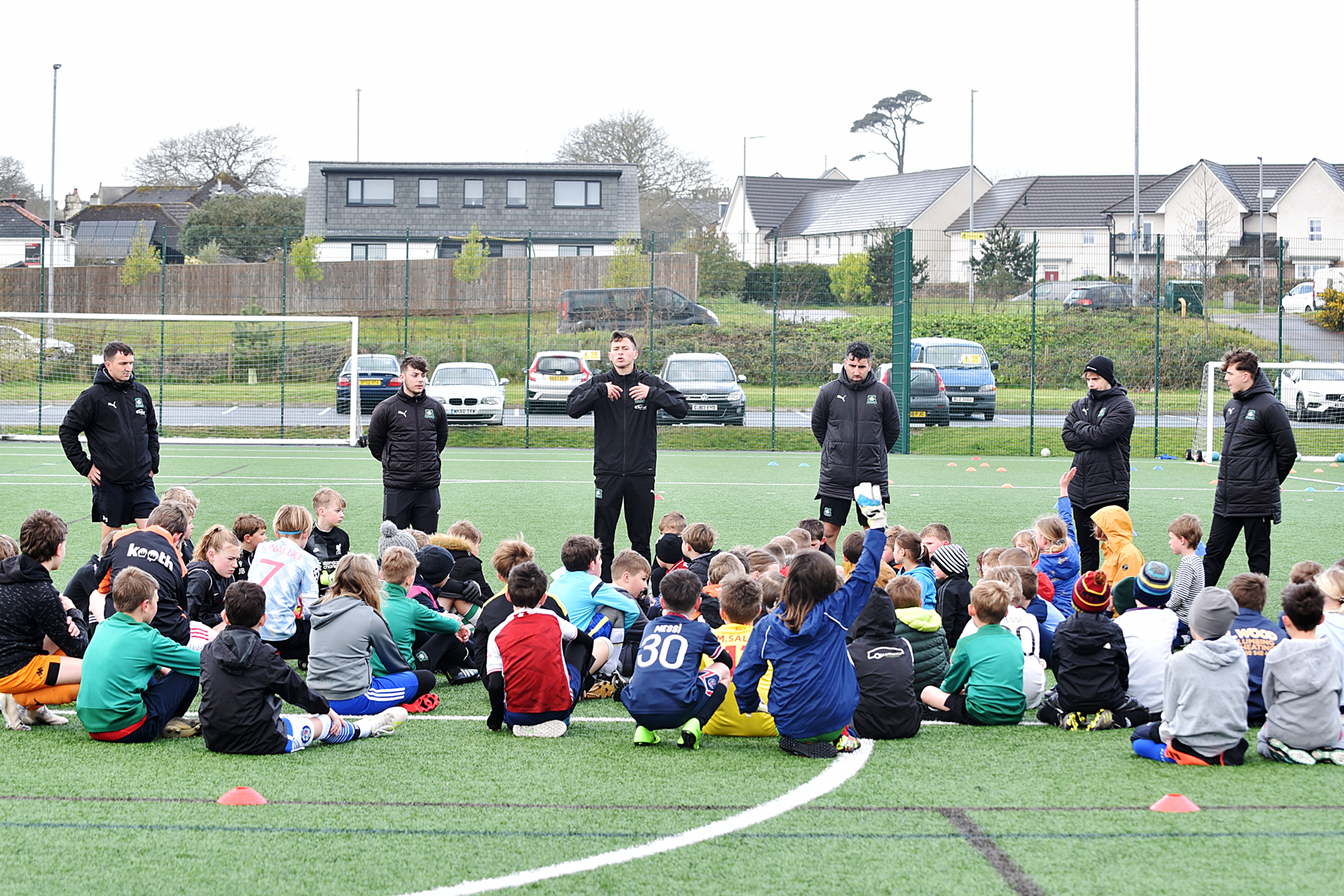 Argyle’s Easter holiday programme of football roadshows in Cornwall got underway in Falmouth on Monday, 11 April.

Run by the Argyle Community Trust, the fun-filled football sessions give children aged 5-15 the chance to develop their skills and make some new friends.

More than 70 kids turned up at Falmouth Sports Hub on Monday for the first of 16 roadshows happening throughout Cornwall over the Easter holidays.

Although an early rain shower in west Cornwall threatened to put a dampener on the day, the skies cleared just in time for the start of the session at 9.30am.

Under the guidance of seven of Argyle’s community coaches, the children were split into four age groups and began the day with some simple football-based activities before heading into small-sided games and shooting practice.

Lunchtime gave the kids a chance to refuel ahead of a series of penalty shootouts and small-sided tournaments in the afternoon, with all participants receiving a medal before they went home at 3.30pm, while the player of the day from each of the four groups also took home a trophy.

Argyle's football roadshows have been developed in line with the Trust's core vision to inspire and make a positive difference to Devon and Cornwall communities through the power of sport and the brand of Plymouth Argyle FC.

Lead coach Lucas Potts, who oversaw the Falmouth event, said: “We’ve got lots of children here who haven’t played football before; they come for a day and they know how to play.

“They get sporting outcomes - it might be that they’ve now realised they enjoy kicking a football around, or they enjoy running around and doing tag games. They benefit from playing football but it leads to other sports as well.”

He added: “We just hope that they leave with enjoyment, that they’ve met a new friend or found a love for something different.

“We work in a lot of schools with the same children, so they get to see different games.

“Often they remember one game and they take it to their grassroots team and ask if they can play it there.”

He added: “They’re having fun, they’re making friends, they’re having a laugh, and also in each one there’s something to be learned.

“Whether it’s a shooting drill, a defending-based session, or team-based games, it’s something they can take into their club or whichever teams they play for on a weekend.”

With plenty of spaces still available on several sessions over the next two weeks, the coaches are encouraging anyone who thinks they might want to give football a go to come along and try it out.

“Come down and enjoy it and if there are any issues the coaches are there to solve them and help you out,” Lucas said.

“Be nice and brave and if you don’t feel comfortable, tell the coach and they will make it work for you.”

“Try it and if you like it you can come back,” Harry added. “If not, then you can venture off to something else, but most people who come, we end up getting back, so that’s quite nice to see.”

There are still spaces on several of the remaining roadshows throughout the Easter holidays. The sessions cost £19 per child, with discounts applying for groups of two or three siblings.

There are also several roadshows taking place in the east of the county during the half-term holiday at the end of May. Click here for availability.