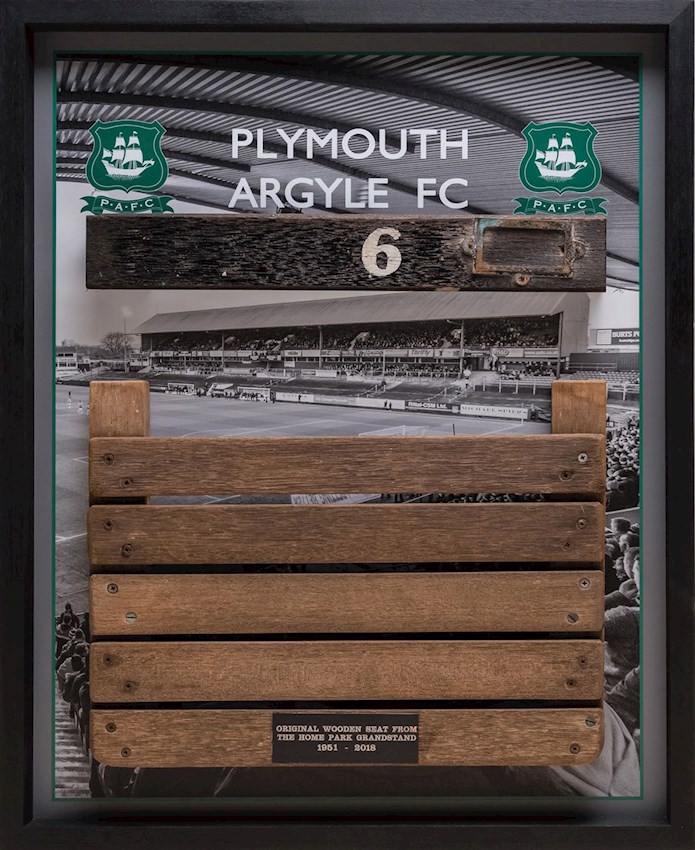 AS the redevelopment of the Theatre of Greens continues to gather momentum, season-ticket holders are being invited to take their seat.

Work has already begun in several areas of Home Park, and the focus is shortly to turn to a major part of the multi-million pound project – the main grandstand.

Part of that work will see the wooden seating, which harks back to the 1950s, carefully removed and replaced with a 21st century update.

The club has been inundated with requests from nostalgic supporters to allow them to have their seat to keep as a memento - and so has made arrangements for them to be able to do that.

The configuration and original installation means it is impossible to extract individual whole, working, seats, so we have come up with five options for supporters who want to preserve their grandstand memories.

The most eye-catching sees the back panel and the horizontal part of a single seat mounted in a high quality open-fronted frame, to allow full sensory access, on a black and white print of the grandstand on match-day, complete with a descriptive plaque. A certificate of authenticity, personally signed by chairman James Brent and manager Derek Adams, is included.

The above picture is an early mock-up of what the mounted seat will look like. In the final design, the title and crests will be significantly higher than the back of the seat, making for a more pleasing display.

As an alternative, the back and seat panels will also be available in a presentation box, this time along with a printed certificate of authenticity, and there is a similar presentation-box option comprising just the back panel of the seat.

The panels will all be sized and rough edges sanded but, otherwise, will be exactly as they were when in use for nearly 70 seasons.

As well as giving 2017-18 season-ticket holders the opportunity to buy their designated seat, the club is also making available a limited number of seats that were not assigned last season for non season-ticket holding members of the Green Army to purchase.

Supporters looking for more than their own cherished seat will be able to buy blocks of four or six that remain after season-ticket holders have been catered for. These will include all available workings.

All the options are available to purchase from Thursday, June 7 through the Argyle Superstore website.

Season-Ticket holders have until June 30 to claim their seats.

Option 1 - Framed back panel and main seat: £199
Framed in a high quality timber-milled 550mm x 680mm tray, hand finished in black/beeswax with open front, so that the seat is fully on show, mounted on a high resolution black and white print of the grandstand on match-day in its final season. Ready to hang. Includes a descriptive plaque and a high quality certificate of authenticity individually signed by chairman James Brent and manager Derek Adams.

Option 2 - Boxed presentation of the back panel and main seat: £75
Presented in a display box and including a printed certificate of authenticity with printed signatures of chairman James Brent and manager Derek Adams.

Option 3 - Boxed presentation of the back panel: £35
Presented in a display box and including a printed certificate of authenticity with printed signatures of chairman James Brent and manager Derek Adams.

Option 4 - A block of six seats: £350
Six complete seats, including – where possible – all workings.

Option 5 - A block of four seats: £250
Four complete seats, including – where possible – all workings.