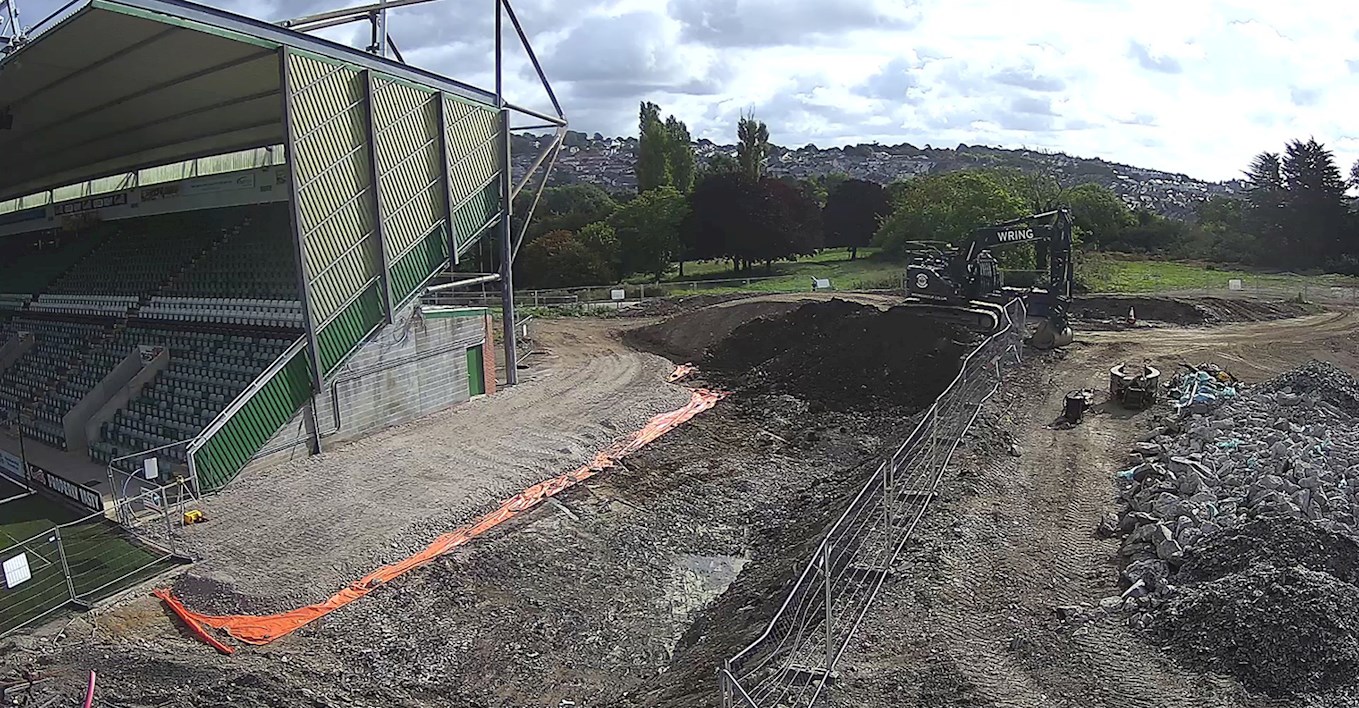 A FEW weeks have passed since we last posted a blog on the world wide web, but that does not mean that things been quiet here at the Theatre of Greens. Indeed, I did pen some words a couple of weeks back, but a series of far more important news items led to them staying on my laptop!

So where were we? Since I last wrote we have seen the demolition of a much-loved part of our ground; the excavation of the ground to pitch level underneath where the Chisholm Lounge stood for so long; the commencement of the removal of the old Mayflower terracing; the near-completion of the shop and ticket office installation; and the start of the internal rip-out of the grandstand.

Oh, and the signing of a multi-million contract with GLevents – our excellent main contractor. One day, I will share the planes, trains and automobiles story of getting the original contract document from Plymouth to Birmingham for signing, then back again in time to meet the signing deadline our end. However, for now, suffice it to say that Royal Mail’s premium guaranteed next-day service is apparently more of a hope than a promise...

So, the redevelopment of Home Park continues apace. Since I last wrote, we have said goodbye to the always slightly odd looking house-like building that contained the Chisholm Lounge, the Bickle suite, the old Control Room and the match-day announcer and TV mixing desks. We asked Mike Bickle and his family to come in to help say goodbye on the last day it stood tall, and everyone (bar the heard-hearted demo boys, of course) had a few tears in their eyes as the building was razed to the ground.

Meanwhile, the behind-the-scenes fitting out of the shop and ticket office continues – electrics, a new gas main, a new water main, IT, intruder and fire alarms, etc. all need to be sequenced and completed. Once this phase is ready, our top team of shop-fitters are good to go, with September/October still our planned opening date. Jamie (our main marketing man) and Rachel (our long-standing retail manager) have done a great job in designing your all-new Argyle SuperStore. It is also great to see the excitement building in Rachel and her team; I am certain that they are going to have the best club shop in our league (and better than quite a few clubs currently above us) when it is finished.

We are also continuing to work on preserving - and repairing – the old facade. The new steel nuts and bolts still need to be hidden, and we have asked a couple of industry experts to help us keep this iconic piece of art deco structure fit for another 80-plus years. I am completely confident that it will look amazing once completed – oh, and just another request for help to find the old facade signage – someone must know where it is!

Looking elsewhere within the stadium, GLe have set up their full suite of site offices now and their foreman Dave is a formidable gatekeeper of the site. As the work moves towards the old gal of the grandstand herself, you will be able to see a lot more of what is happening when you come along on match-days from now on, although much of the work will be internal. The removal of the seats and the demolition of the lower terrace will be clear to all when we host Blackpool.

As has been detailed far more fully elsewhere over the past few weeks, we have been incredibly diligent in getting to the finalisation of the main contract, checking and double checking that every T has been crossed, and every I has been dotted. Although it has taken us longer than we initially anticipated, the contract that we have with GLe sees the club exposed to a remarkably low level of project risk compared to the industry standard. Our professional team have been just excellent during the last few weeks, and in particular, I stand in awe at what our programme director has achieved. Thanks Tony – only a few of us will ever know how indebted the club is to you.

The diligence that we have taken has not really delayed us, though, because of the way we have approached the work; we identified suitable packages of work that could be moved from the main contract to the enabling one at an early stage, to ensure that there was no slippage and no pause of work between the two contracts. The parcel of work that included the demolition of the Chisholm was actually the last example of this, being moved from the main contract to the initial one to ensure that it was demolished as planned many months ago. As I have said before - and I hope to keep on saying - we are where we expected to be, give or take a few inevitable bits of detail.

The site of the Chisholm has required a huge dig to get it to pitch level, and the contractors are discovering more and more surprises every day – live cables that should not be there, old steps, that sort of thing. I have told them that it is also the site of the old elephants' graveyard from the zoo which, it is fair to say, has caused them a touch of nervous apprehension... Once fully down to pitch level, this part of the ground will also be where the big machinery will be brought into the stadium, with a new permanent vehicle access sitting between the new changing-rooms and the Barn Park End stand.

Our new suite of facilities for the players will include dressing-rooms for both teams; two sets of match officials dressing rooms (for male and female use); a physio room; boot room; and new laundry. We will also be building a players’ pedestrian access/exit at the rear of the dressing-rooms to allow the lads a far more convenient route to our training ground, Harpers Park.

As the gaffer has previously mentioned elsewhere, we are also looking at building a temporary players’ facility, to include changing-rooms and match official changing facilities, on the ground outside of the old Spion Kop, below our new electronic signage board (thank you, again, to the Senior Greens and every other fans’ group that helped provide this). We have been exploring this option as a possibility for months now but, on balance, have decided that doing this now will allow for the greatest opportunity to hit the start of September 2019 as near ready as we can be.

Whilst I am talking about the temporary changing-rooms, it might be a good time to clear up some misconceptions about the Devonport end vehicle gate, which caused some angst when it was not opened post-match a couple of games ago.

This gate is not a pedestrian gate, and from day one of the ‘new’ stands, has never been included within our exit calculations. Indeed we should not really have ever used it for pedestrian purposes, as national rules state that we must be able to bring emergency vehicles into the stadium unimpeded for a set period after the final whistle. On balance, though, we have used it to allow people to leave the ground in the last couple of games, but this will completely stop once the temporary players’ facilities are in use.

We would ask for your patience and understanding until we all get used to these new arrangements.

Although this will cause some inconvenience to people used to using this exit, I can assure everyone that the ‘horseshoe’ was built to meet standards that still exist today. This means that, if people leave by their nearest exit, everyone in the stadium can get out within the timescales set by the seminal Green Guide. I would also add that, should there be an emergency that requires people to leave the stands even quicker than the regulatory standard, we would bring people onto the hallowed turf.

So, that is all for now – til the next time.