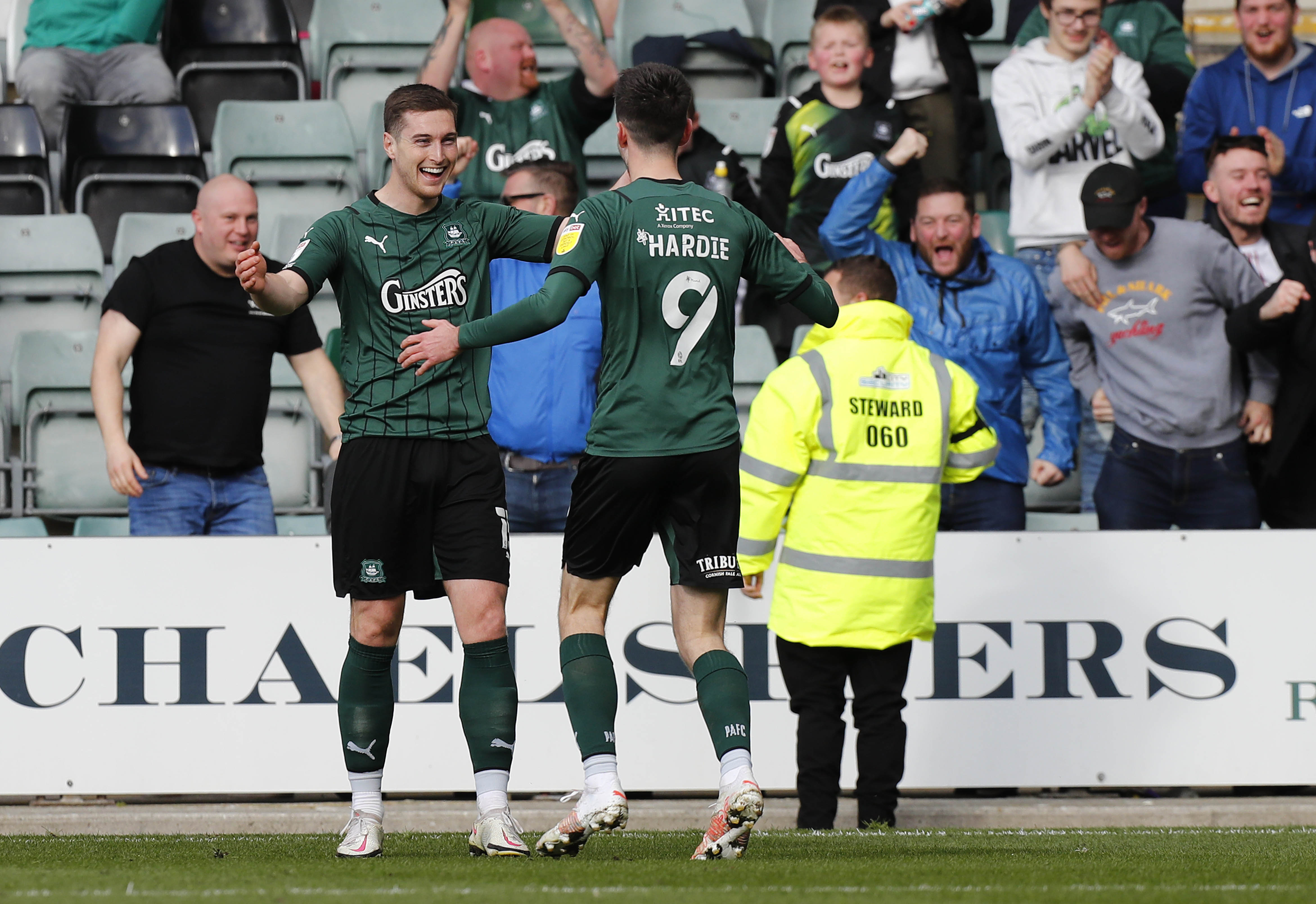 A brace of first-half headers, one firm and one glanced in the extreme, ensured an efficient return to winning ways for Argyle.

Conor Grant broke the deadlock with a powerful head back across goal from Ryan Broom’s cross and Ryan Hardie effectively sealed the points with the merest of touches on a Danny Mayor delivery two minutes before the break.

Argyle manager Steven Schumacher made two changes from the narrow loss to Rotherham, Luke Jephcott and Broom replacing Jordon Garrick and Panutche Camara, while there was a familiar face in the Morecambe dug-out, former Pilgrim boss Derek Adams embarking on his second stint with the Shrimps.

In glorious Home Park sunshine, the Greens pinned their visitors back in the early stages and a delightful exchange between Mayor and Grant resulted in a cross hurriedly cleared for a corner.

Grant picked up the subsequent set-piece and clipped a lovely cross to the far post for Joe Edwards to meet on the volley, but Trevor Carson was in the right position to make a strong save with his fists.

Morecambe briefly settled into a solid period before that was rudely interrupted by a well-worked opener for the Pilgrims, as Broom stood up a perfect cross to the far post and Grant timed his leap perfectly to plant a controlled header into the bottom corner.

Mike Cooper ensured the celebrations could continue with an outstanding save, racing off his line to smother an effort from Dylan Connolly just a minute after the goal.

Argyle soon returned to territorial dominance, with the defensive trio of James Bolton, Macaulay Gillesphey and James Wilson, plus the Jordan Houghton screen, swiftly snuffing out any Morecambe hopes of a shackle-breaking counter.

When Connolly did find a modicum of joy in the channel, his cross was comfortably cleared, as the Shrimps scurried to get up the field in support of their forwards. Mayor then received a whack from Connolly, quickly repaid with a strong tackle in response from Argyle’s number ten.

The visitors, however, were ending the half with a bit more impetus, as a shot from Cole Stockton flashed across the face of goal. That impetus was quashed by a Pilgrim second.

Mayor cleverly jinked room for an inswinging cross aimed toward Hardie, who managed to apply the faintest of touches with his head and Carson was stranded, as the ball drifted happily into the far corner.

Argyle restarted with some lovely work by Wilson and Edwards by their own corner flag, leading to a Broom pass for Hardie to run down the wing and fire over a low cross cleared by the retreating former Pilgrim Anthony O’Connor.

A rasping drive from Adam Phillips, superbly tipped wide by Cooper, was a timely reminder of the Morecambe threat, with the early spring setting sun making things a little awkward for both sides.

The lively Stockton was withdrawn for Jonathan Obika on the hour but Argyle remained in the ascendancy, Hardie swivelling for a shot fizzed inches over after Luke Jephcott had disrupted the Morecambe defence from a Gillesphey cross.

Ennis for Jephcott was the first Argyle switch but, back to the Shrimps, and Connolly thrust his way through midfield and slipped a pass to Obika, who thankfully steered his side-footer over the bar.

The game then entered a dangerous lull. O’Connor very nearly took full advantage, heading back across goal, and he was almost celebrating before a terrific left hand from Cooper deflected the ball off target.

The Greens freshened their troops with the introduction of Garrick and Adam Randell for Hardie and Houghton, while Gillesphey enjoyed a rare trip to the opposing box, stroking a low effort narrowly wide.

Argyle saw out the closing minutes and will hope to carry the positive momentum into Tuesday night’s visit from Wimbledon.