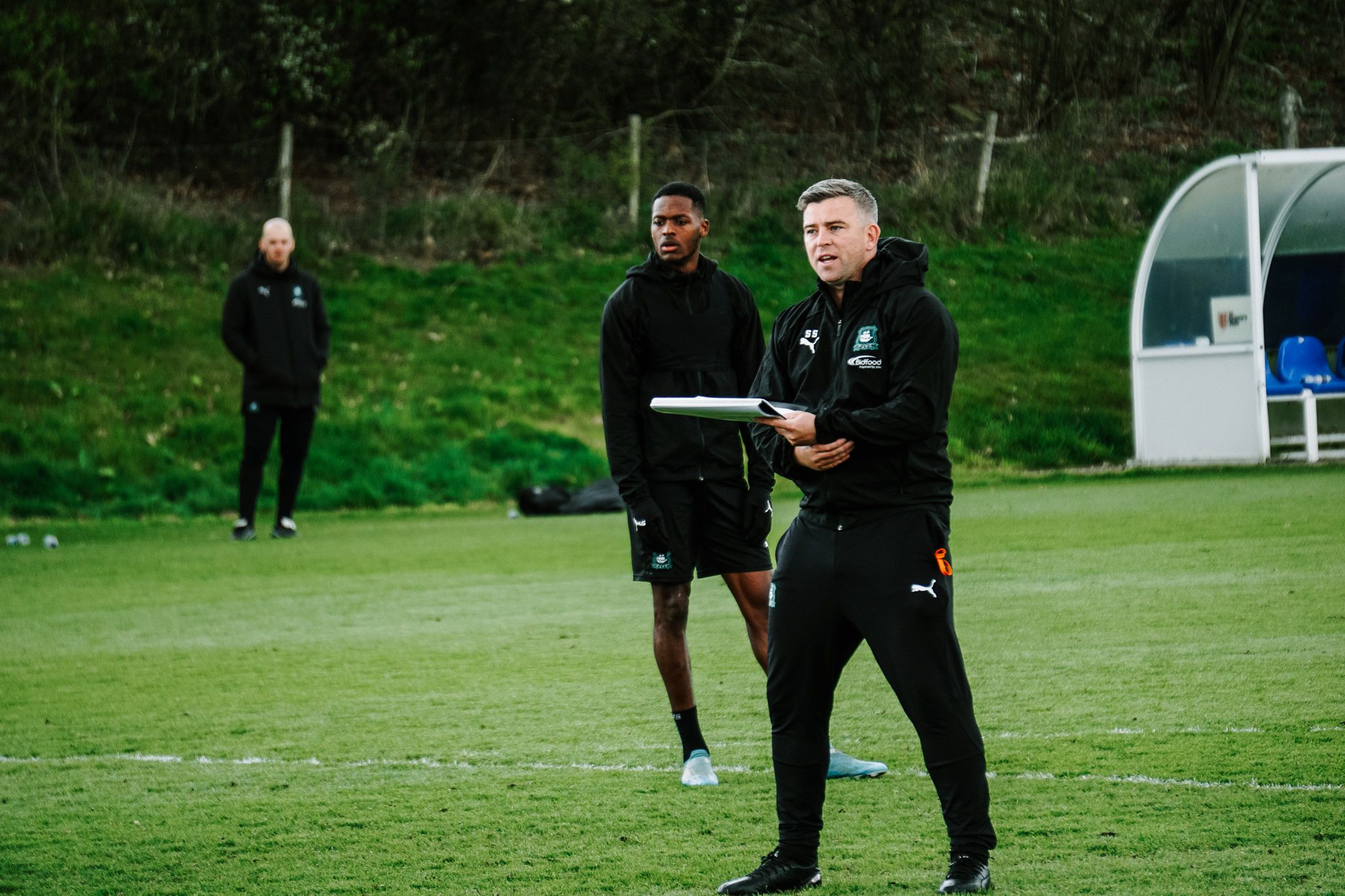 Argyle head into their final away game of the regular Sky Bet League One season hoping to bolster their chances of making the play offs.

The Greens travel to league leaders Wigan Athletic who themselves will be hoping to wrap up promotion and potentially the title.

Argyle could secure a spot in the top six if they win and Wycombe Wanderers fail to beat Sheffield Wednesday.

Any sort of positive result would put the Pilgrims in a very good position to extend their season by at least two matches.

As for Wigan, a point would all but secure promotion back to the Sky Bet Championship and a win would see them crowned champions if Rotherham fail to beat Oxford United.

With so much at stake for both sides, Steven Schumacher was remaining calm as he spoke to the press in the week.

“We have two massive games coming up, at Wigan and then at home to MK Dons.

“This race for the play-offs is going right to the wire, isn’t it?

“We’re all looking forward to it, so bring it on.”

Argyle sit fifth in the table with 79 points but have won just once in their last five matches.

That being said, defensively the Greens are incredibly strong demonstrated by the fact that they have kept nine clean sheets in the last 11 games.

That has been the bedrock for Argyle’s success this season and Steven knows that the players will once again have to ready for the test they will most certainly face on the weekend.

He said, “We’re working really hard and know we have to be right at it because the quality of the teams is incredible.

“The top eight or ten teams have incredible squads, anyone can play or step in and do really well.

“Some teams have names or players who have played in the Premier League, we have to be ready for whatever we’re faced with.”

It has been a great year for Argyle on their travels this season and 33 points collected from their 22 games played, only four teams in the league have a better record away from home.

The squad will be hoping they can put in another positive performance away from Home Park and pick up their first win since mid-March.

Wigan won the reverse fixture back in December, thanks to a late Callum Lang goal, and have been in the top part of the table for most of the season.

No side has won more games or lost fewer than the Lactics who also have the second-best strike force in the division.

Will Keane scored two goals against Ipswich Town in Tuesday night to bring his tally to 23 for the season and go joint top of the scoring charts.

The draw at Portman Road was the third game in a row that Wigan have failed to win, but with just one defeat in their last ten league games, they are a tough nut to crack.

A win on Saturday would take the Lancashire outfit to 91 points and even with an MK Dons victory, that would be enough to secure a return to the second tier.

Panutche Camara is a major doubt for the Greens after picking up a hamstring injury in the draw with Sunderland on Monday.

Ryan Hardie came through that game unscathed, after returning to the starting line-up, however the trip to Wigan is expected to come a bit too soon for captain Joe Edwards.

Wigan will be without Charlie Wyke and Tom Bayliss due to illness.

Tickets are no longer being sold for this fixture however, supporters can buy tickets at the ground on the day of the match.

A fascinating game, full of tension, intrigue and quality ended in a 1-1 draw and a potentially massive point for Argyle’s play-off hopes, as well as Wigan’s automatic promotion dreams.

The stalemate was broken by Luke Jephcott just past the hour, reacting superbly to a rebound and the Pilgrims held that advantage for 11 minutes, but the Latics grabbed a draw with a low strike from Jack Whatmough.

Argyle boss Steven Schumacher made two changes from the Easter Monday draw with Sunderland. Ryan Broom came in for the injured Panutche Camara and Jephcott replaced Niall Ennis in attack.

The Latics made a bright start on a beautiful spring day, winning a couple of early corners, headed clear by Danny Mayor and Dan Scarr. The third set-piece found Jordan Cousins at the near post, but he was unable to keep the header won.

It was then all about Mike Cooper, who produced an incredible double save. A sweeping ball to the right wing was switched low by Tendayi Darikwa for Callum Lang in the box, but Cooper made a superb reaction save before, somehow, recovering to scoop the ball away just as Will Keane was about to slide in the opening goal.

Wigan maintained their attacking impetus with Max Power feeding Lang in the right channel, but his shot was dragged wide of the far post. In response, Steven Sessegnon surged forward for the Greens and fed Ryan Hardie, who saw his cutback for Jephcott scurried clear by the retreating Latics.

After a frenetic start from the hosts, the Pilgrims had done a fine job in calming the situation with some composed passing in midfield and a disciplined defensive shape. Cooper also played his part, punching clear yet another Wigan corner.

Terrific back-post defending from James Wilson prevented Tom Pearce from reaching a chipped cross, followed by a Power corner that curled beyond everyone and just beyond the far upright in the final act of a tight first period.

Argyle restarted with a Conor Grant cross just about cleared by Whatmough before Wigan won corner number nine inside 50 minutes, and for the ninth time, the Pilgrims dealt with the set-piece threat.

Power did find room for a header from Lang’s cross moments later but the effort was steered wide. Argyle replied with a decent spell of probing possession, Sessegnon and Broom looking particularly lively on the right.

Jordon Garrick for Hardie was the first Pilgrim change and he very nearly got on the end of a delicious Sessegnon cross just seconds after entering the fray. Garrick then won a free-kick in a dangerous position after being tugged back by Joe Bennett.

Grant took the free-kick with a curling effort that bounced in front of goalkeeper Ben Amos, who was unable to gather the ball and Jephcott pounced in typically predatory fashion to slam a confident finish into the gaping net.

Darikwa volleyed comfortably wide, as the Latics sought a swift leveller but Argyle were soon back up the other end, Garrick continuing his tremendous impact with a dangerous low cross that just eluded Jephcott.

Sessegnon and Broom then combined again, with the ball rolled back to Grant on the edge of the area for a shot that was too high to trouble Amos. Wigan returned the danger with a brace of dangerous crosses cleared by Scarr and Houghton.

Unfortunately, there was no stopping Wigan from the subsequent corner, as the ball bounced through to Whatmough, who guided a low shot through a sea of legs and beyond the stranded Cooper.

A nice exchange between Grant and Jephcott led to another Argyle free-kick within shooting range, but this one hit the wall, and Wigan broke at pace for a low Lang shot well saved by an alert Cooper.

Ennis replaced Jephcott for the final eight minutes but Wigan were the side on the attack, Lang with a shot deflected inches wide. Back to Argyle, and a deep corner from Grant found the head of Scarr, who clipped the top of the bar with a towering effort.

Game over and it all goes down to a momentous final day against MK Dons at Home Park.